A widow has created the world’s first garden for the Royal Horticultural Society in memory of her late husband – made completely out of WOOL.

Since his death, Clare, a former GP’s receptionist, has suffered from post-traumatic stress disorder and anxiety, but has found solace in knitting.

Clare, 50, has spent the last two years trying to raise £50,000 for the Sue Ryder Leckhampton Court Hospice in Cheltenham, Glos., where Ken was cared for.

Her woollen creations were so good the Royal Horticultural Society (RHS) asked her to create a knitted garden for their annual May show in Malvern, Worcs.

Today (Thurs) her wool garden was unveiled, which shows a recreation of Ken’s room at the hospice surrounded by his favourite pot plants and flowers.

To complete the garden, Clare was knitting up to 12 hours a day but was also helped thanks to a global appeal on social media.

More than 450 knitters from across the world sent her 40,000 woollen flowers and hearts for the installation which is the centre piece at the RHS Malvern Spring Festival.

Clare, of Gloucester, said: “After Ken died, I found life very difficult until my clinical psychologist suggested knitting as a way to help.

“I’ve always tried to turn all negatives into positives since Ken died, so I picked up my knitting needles.

“I started by creating knitted Christmas decorations and Easter Bunnies which raised £1,300 for the hospice where Ken was looked after.

“This was followed by installing a yarn bombed message of thanks in the hospice grounds in May 2017 with the help of a group of friends and knitters.

“This led to an invitation for us to do something special at RHS Malvern Spring Festival. 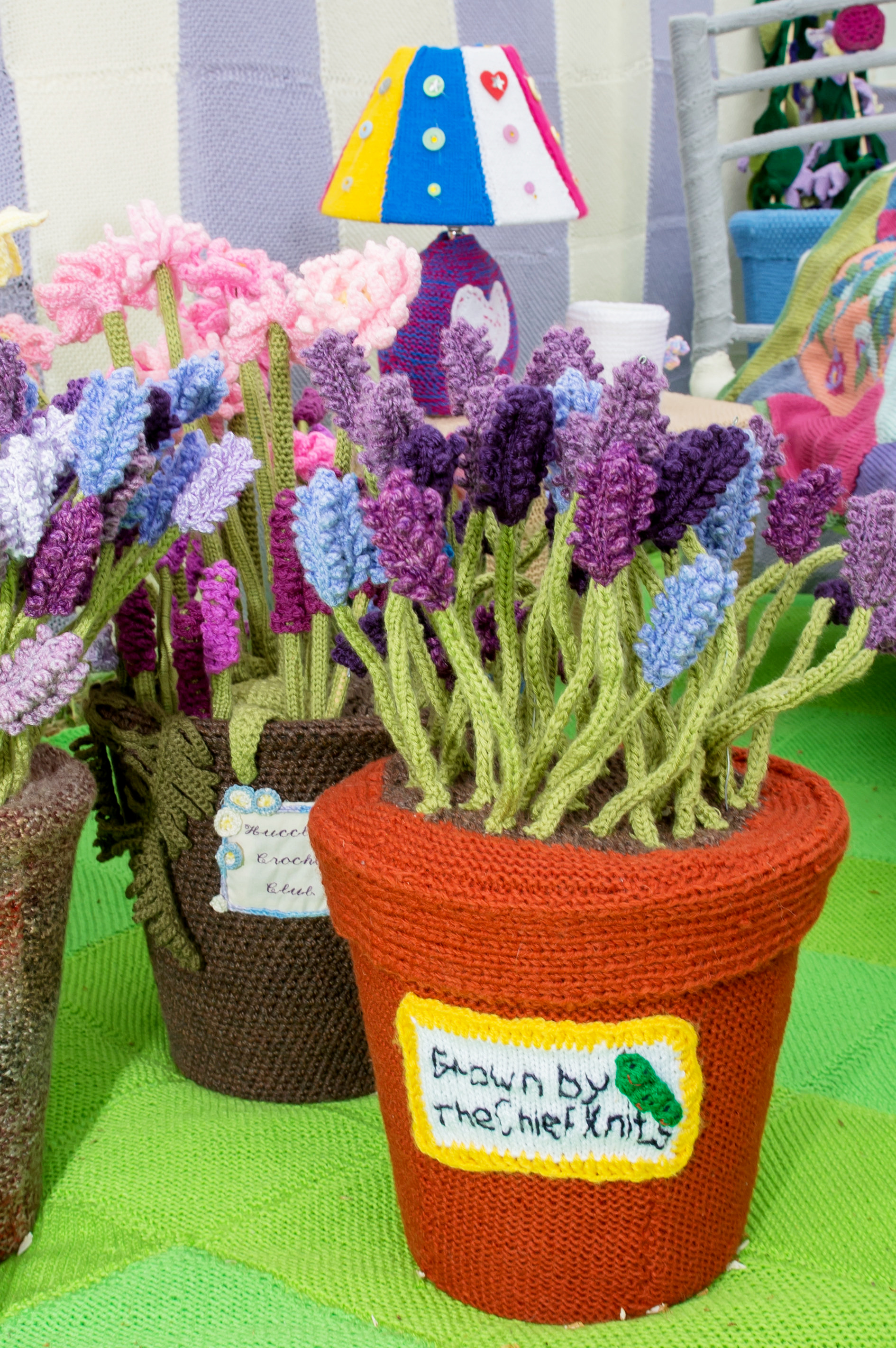 “I knew I would’ve been able to do it on my own because its four metres by four metres.

“We put a plea out on social media for knitters and started meeting from then on in.

“There are knitters throughout the globe, so it’s difficult to know exactly how many but I’ve estimated it around 450 knitters in total.

“Since we started it up till now, they been knitting hearts, flowers, grass, wallpaper and exterior walls.

“There are about 35 to 40 pots of flowers in the garden from Women’s Institute community groups and knit and natter groups.

“On top of that I put out a plea for 10,000 hearts because I wanted them as part of my heart installation and that’s when it went global.

“We’ve got daffodils, lavender because it is used in alternative therapies at the hospice where my husband died.

“My wedding bouquet was also re-created in a flower pot – there is also tulips and roses.

“I knew I needed to knit for a cause, which is why I chose the hospice that took care of my husband.”

Clare’s popular wool creations went viral after she yarn-bombed the hospice as a thank you to staff last May.

The mum-of-four said: “We yarn bombed a tree at the hospice as a way of saying thank you to all the staff and volunteers.

“That caused a bit of a social media storm and we were called Gloucestershire’s Banksy.

“From that I was offered the chance to knit a garden at RHS Malvern.

“It’s a hospice garden, there is a hospital bed in the middle surrounded by pots of flowers.

“It’s almost like we’ve brought the outside into a hospice patient’s room who can’t go out anymore.

“It’s quiet overwhelming really, but it just shows what you can do.”