Harry Titley the son of Emma Clay-Burley, 25, and Jason Titley, 46, who was born with Brittle Bone Disease.

Meet the ‘real life China doll’ so fragile he broke three bones before he was even born.

Brave Harry Titley has rare genetic condition Brittle Bone Disease which means a sneezing or coughing fit could leave him with broken ribs.

The tiny tot broke one rib while in the womb, his right shoulder and leg while being born and left leg while he was being given an x-ray at just three days old.

His condition means parents Emma Clay-Burley, 25, and Jason Titley, 46, can only cuddle their son gently for fear of causing compression fractures that may never heal.

The little tot spent the first four weeks of his life in full leg casts but the family’s careful cuddles and constant watch has helped him avoid further breaks.

Little Harry has to use a special car seat that keeps him flat, has a camera over his cot so he is under constant watch, and his crib has solid walls to stop him dangling his arms through the gaps.

The rare condition – officially called osteogenesis imperfecta – affects 1 in 15,000 people and Harry inherited it from his dad, who also suffers.

Mum Emma Clay-Burley, 25, from Birmingham, said: “You can give Harry a cuddle but have to be gentle and he certainly couldn’t play fight like other children.

“I would lie awake during my pregnancy thinking about what it could be like.

“I wondered how we would cope and if I was good enough to be the mother of this beautiful baby with a condition I simply didn’t feel I know enough about.

“But it was even more scary when it became a reality.

“Harry broke his rib while in my womb but we didn’t know until he was born.

“But he also broke his right shoulder and right leg during birth before breaking his left leg during an x-ray because nurses weren’t yet aware of his condition.

“Both legs were in full casts and we had to keep his arm elevated to help his shoulder heal.

“He may have brittle bones but he has an unbreakable spirit. He’s just like any other kid deep down.” 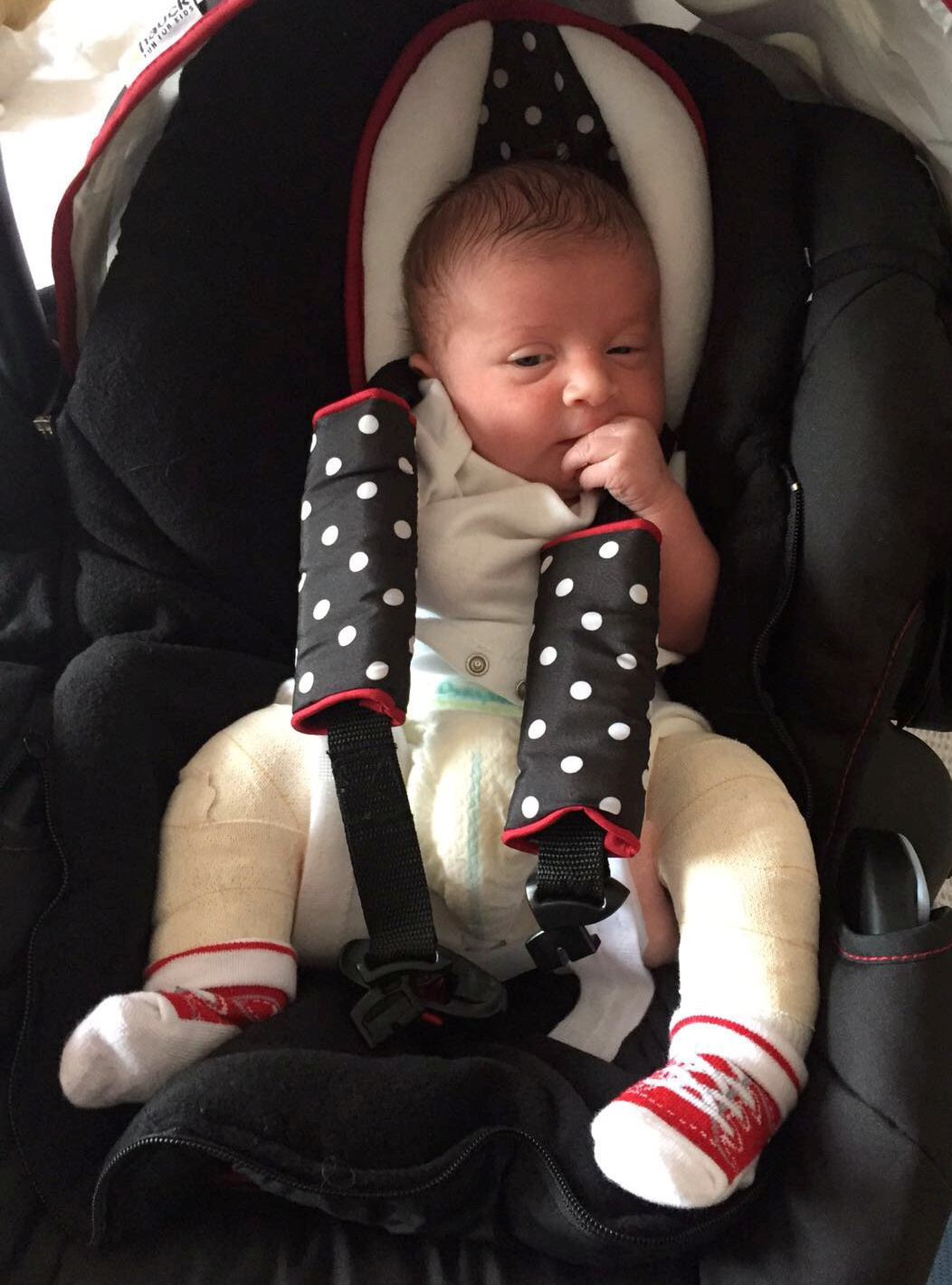 The disease is caused when fibres within the bones are not thick enough to support the body.

Jason, a graphic designer, was born with the condition and has broken more than 20 bones.

The top bone in his right leg – the femur – has been broken for two years and is held together by a giant pin after he tripped at home while decorating.

The dad-of-three, who has two sons from a previous relationship, knew there was a 50/50 chance Harry would have brittle bone syndrome, also suffered by his eldest, Joshua, 20.

But they didn’t know for sure until Harry was born on 25 July, 2016 and an x-ray confirmed their fears.

Both his legs were in plaster for four weeks, and while he is currently fracture-free, they are constantly worried about him tumbling over or knocking into something.

“It was a natural birth but Harry should have been delivered by caesarean because he wouldn’t have broken his shoulder or leg,” said Emma.

“If I have children in the future I will be by caesarean.

“I’m scared to death at the thought of Harry growing up and being independent. It’s your job as a parent to protect your child but he has got to live a normal life.

“I worry that people will not be clued up at school or aware of the condition and he could get seriously injured on the playground.

“There was nothing that could prepare me for having my first baby never mind him sadly having this condition.

“My world came crashing down around me. I was his mummy – and I couldn’t stop any of this from happening to him.

“We have to make sure we always pick him up and under his arms and towards his ribcage to be safe. Parents often pick their other kids up by the arms and swing them round but we can’t with Harry.

“We have to make sure there are no trip hazards and that the kitchen floor isn’t slippery.

“I put him in a safety play area for the first time the other day for junior kids but when the other kids got in and started picking him up I knew it was time to leave. 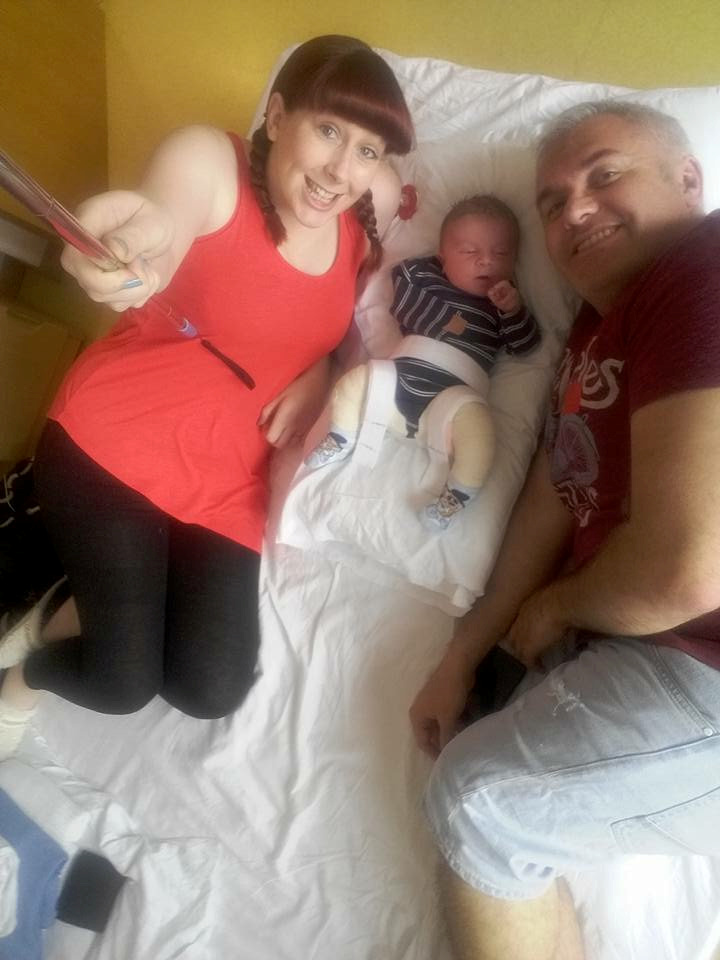 “I have camera on his cot at all times and he sleeps in a bumper because it stops him putting his long arms and legs through the bars of a normal cot which is very dangerous.”

Harry will never be able to play sport as a simple fall in the wrong direction could break multiple bones – as could a coughing or sneezing fit.

Jason said: “As a sufferer, sometimes I can have a fall and be fine – other times I’ve lifted a table and broken my wrist – there’s just no telling.

“Even the seasons affects the condition, like the cold weather can makes my previous fractures ache, but generally it’s improved with age.”

Harry undergoes two days of treatment every two months at a children’s hospital to thicken the bone fibre.

The couple are hoping to raise more awareness for the disease to better prepare schools and hospitals for children with this condition.

Dad May Lose Foot After Minus 54 Degree ‘Utra-Marathon’