Explosion on Charles Street in Blackpool.

A pensioner has described the moment an explosion sent a fireball tearing through his three storey home destroying his possessions and leaving his partner in a coma.

Martin Viney, 70, managed to escape the suspected gas blast which ripped through his home in September this year with minor injuries.

His partner of 20 years Pauline Citterio was placed in a medically induced coma and is still in a critical condition in hospital.

Martin, who is no longer living in the property, had not spent a night apart from Pauline in two decades before the blast but has since struggled to visit her.

Speaking for the first time since the explosion at the former guest house Martin said he knows things could easily have been worse.

“I remember her going into the kitchen and I went in the front room,” he said.

“Within a couple of minutes there was a bang. I could not hear any explosion but I remember all the stuff falling down on me, like the ceiling.

“I was stunned. I knew where Pauline was but I didn’t know she was under rubble. I was shouting for her but couldn’t make myself heard.

“They say she won’t be able to walk again. She is beetroot red everywhere.

“I was very lucky, I know that much.”

Pauline’s pelvis was shattered and her legs broken qne she was also badly burned.

Martin now faces a 35-mile round trip to Preston and is without a car after his black Ford Ka was written off in the explosion at the former guesthouse thought to be worth around £100,000 home in Blackpool, Lancs.

Lancashire Fire and Rescue Service said that they believe the explosion was triggered by some sort of gas build up.

All of Martin’s belongings were also destroyed in the blast and he is now living in a flat on with close friend and lodger Nigel Thomas.

Nigel, 64, was in a nearby resort bar and rushed back to the house after hearing the news.

No one has been allowed inside the condemned home since.

Nigel said: “Just imagine what you are standing in and you have nothing else. That’s what we had.

“We are relying on friends but they have lives and businesses to run.”

Martin added: “Everything has gone. They won’t let us in to get anything. I have had to manage with neighbours, and friends and family.” 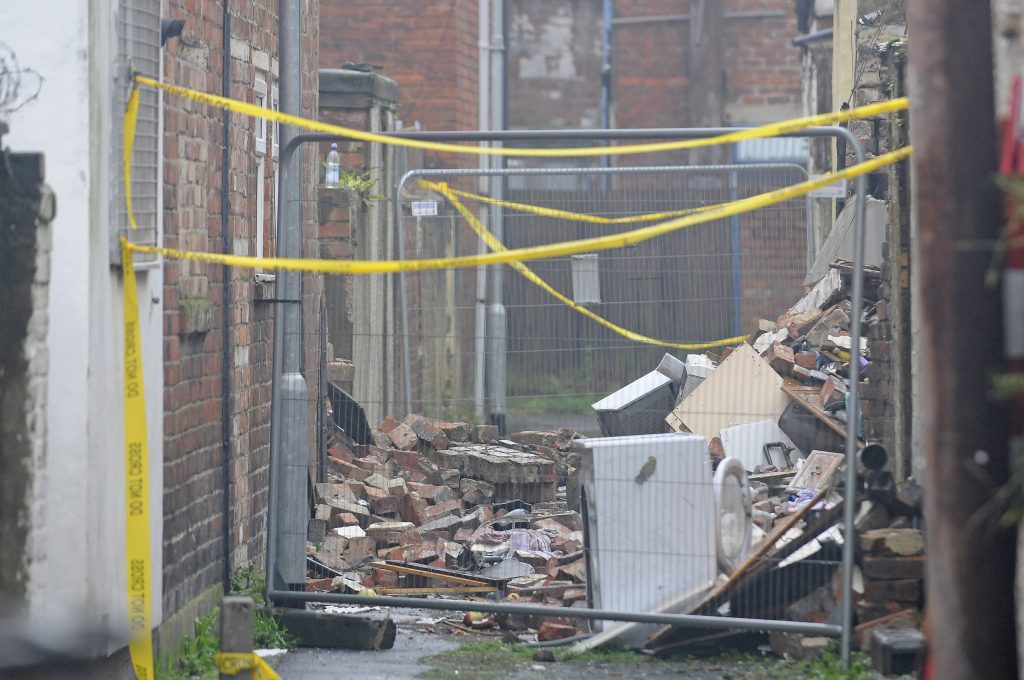 However, Martin’s insurance firm has said he will be provided with a hire car, meaning that he will now be able to visit Pauline in hospital.

Martin said: “I saw her quite a bit at the beginning but the transport has become too much.

“We just have to phone up now. I’m fed up with not seeing her.”

Martin was helped out of his home – which was insured and now faces demolition – by two passers-by, including tattoo artist Jason Slater.

Pauline was freed by firefighters after being dug out of the wreckage by hand in around 90 minutes and airlifted from the beach to Preston.

Tony Wheeler, 28, was rescued from a flat next door after being pinned to the floor by a ceiling joist and also taken to hospital. He was later released after escaping with minor injuries.

Having being donated furniture, clothes, and other essentials by pals, Martin and Nigel hope to eventually get in to retrieve sentimental items, like photographs and dolls given to Pauline by Martin when they first moved to the resort.