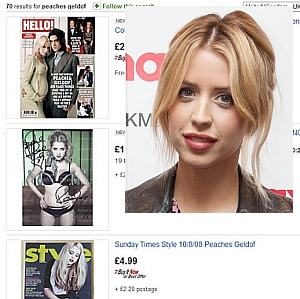 Internet ghouls have been blasted for cashing in on tragic Peaches Geldof by flogging her dresses and autographed pictures on eBay – MINUTES after her death was announced.

The mum-of-two was discovered at her £1 million home in Wrotham, Kent, at 1.35pm on Monday after police were called following concerns for the welfare of the 25-year-old.

Her death was officially announced shortly after 5.30pm but within minutes some fans were already putting autographed pictures and other items connected to her on eBay.

A seller called Vintom was selling autographed pictures of the star for just £1.59 at 6.29pm – less than an hour after the tragic news broke.

Another user – hollyhock12011 – listed a “stunning” dress designed by Peaches for sale with bids starting at £29.99.

The seller claimed she only worn the size 10 garment once.

A signed photo of the late model and writer in her underwear had also received a whopping 17 bids yesterday – with the highest standing at £17.49.

On the description, the seller – thefox147snook – wrote: “This is approximately 7.5×5.5 inch photo which has been hand signed by the late PEACHES GELDOF, dedicated to Dave Peace + love.

“Any blurring is down to camera, photos and items are perfect quality unless otherwise stated.

“I do not sell faxes, copies or prints etc. All items are hand signed by the person in question.”

Other signed photos of Peaches were listed on Monday evening for £5.95, with non-signed pictures being sold off for as cheap as 99p.

One of the 12inch by 8inch posters on sale for £5.95 features an image of Peaches alongside a quote from her saying: “I hate ridiculous names, my weird name has haunted me all my life.”

The seller – who boasted about having seven versions available – wrote: “Original piece of art featuring the sadly missed Peaches Geldof.

“This unique piece is designed by artist James Rand who has had work featured in galleries around the UK.

“Much more than a poster, it’s a beautiful piece of art that would look absolutely stunning framed and ideal for a fan or as a unique gift.”

Bizarrely, eBay users were also selling newspaper clippings about her death for less than £1.

One seller – acorn2oak – listed a copy of an edition of Hello! magazine from September 2012 which featured Peaches’ “fairytale” wedding to Thomas Cohen on the front cover for £29.99.

“It proves all decency has gone down the drain when the first thing these sick people do when learning of someone’s death is to sell their stuff on the internet.

“There should be some kind of law banning people from cashing in on tragedies like this.”

Fellow fan Grace Thomas, 27, from Birmingham, added: “I was shocked at the callousness of these eBay users.

“I went on eBay on Monday night and couldn’t believe how many people were suddenly selling Peaches Geldof memorabilia.

“Some of the items were put up within minutes of her death being announced. It’s simply awful to see people profiting from a young woman’s death. They should be ashamed.”

Vets operate on their smallest patient ever after performing a procedure...