Becky and Toby Eyre in their wedding photos with one of the policemen whose car chase interrupted their photo session.

Newlyweds posing for a photoshoot were stunned when their portraits were interrupted by a police chase.

Happy couple Becky and Toby Eyre had just tied the knot and were posing for pictures in a park when a police officer ran past, followed by two patrol cars with sirens blaring.

Mr and Mrs Eyre had to duck out of the way, along with photographers Annie Crossman and Charlie Tyjas, as police chased after a suspected drug dealer.

They hid behind a tree and watched as the police officers nicked the man, and then returned to pose for photos with the couple.

Mrs Crossman said: “Somebody came up to us and told us we may want to get off the main path because police were chasing a man.

“We hid behind a tree and then saw them come running along, the man first followed by police.

“About four or five minutes after that two police cars came past and officers were shouting ‘congratulations’ out the window as they went by.

“When they had him they came back for some posed photos which was really sweet.”

Mr and Mrs Eyre were married in St Aldate’s Church, Oxford, on Saturday and went to Hinskey Park for the photoshoot in the afternoon.

They had only been there for five minutes when they were warned to get off the path and out of the way of emergency services.

In one picture they peered out at the car, with Mrs Eyre clutching the long skirt of her lacy white wedding gown.

In another she posed with the patrol car and laughed at the camera, with her Ugg boots visible beneath her dress.

And in another, a police officer posed with the grinning couple. 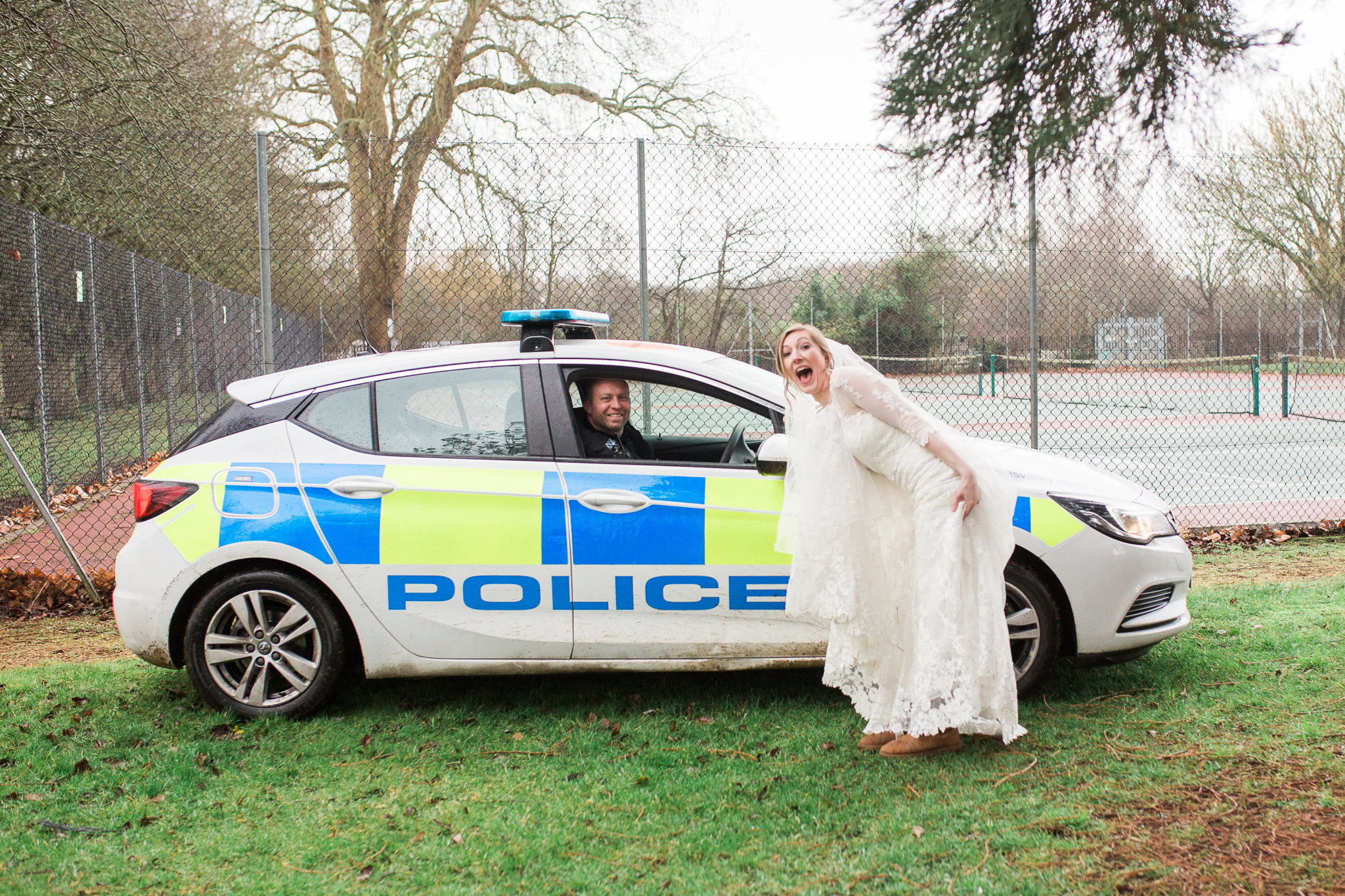 Mrs Crossman added: “It’s certainly not something that happens every day. I had to make the decision whether to include them or not.

“We usually try to photograph weddings as they happen and keep it authentic so I kept them in. I thought it was annoying at first but then I thought, no, it’s actually quite funny.

“Not everyone can say they had a selfie with the police on their wedding day.

“The couple loved it once we saw there was no danger – and it was a good job to end on.”

The couple are now enjoying their honeymoon in Mauritius.

A spokesman for Thames Valley Police said a 43-year-old man from South Hinksey and a 36-year-old man from Oxford were arrested on suspicion of possession with intent to supply Class A drugs, and both were released under investigation.