Helen Spears with her dog Willow at home in Rugby, Warwickshire.

A dog has survived a two-hour operation to remove an 11-inch stick which IMPALED her when a game went horrifically wrong.

Vets say it is incredibly lucky that the brave black Labrador called Willow has made a full recovery after she was left with the “horrific” injury.

Owner Helen Speirs, 50, said three-year-old Willow often flips sticks in the air and catches them on her own, and she was coming to the end of a two-hour walk in Strawberry Fields near their home in Rugby, Warks, when she heard a “bloodcurdling cry”.

She immediately took Willow to Bilton Veterinary Centre in Rugby on April 14, where vets rushed the stricken dog in for surgery to remove the stick, which was almost 30cm (11ins) long.

It had narrowly missed vital vessels, nerves and organs and Willow spent nearly two hours under anaesthetic having surgery, but has now made a full recovery.

In a video released on Facebook, the vets said: “Every year, we see at least one dog that receives a serious injury as a result of playing with sticks.

“This is one of them.

“Willow the Labrador had been playing with a stick when she caught it awkwardly and it ended up impaling her into the mouth.

“Under anaesthetic, vet Ian Taylor could only see a small section protruding from under the tongue but could feel a lump further down the neck.

“Radiographs showed that was a much longer section of stick running deeper into the tissues towards her chest.

“It transpired that the stick (nearly 30cm) entered under the tongue and continued to about halfway down the neck.

“Luckily it appears to have missed every vital vessel, nerve and structure in that area.

“The portion in the mouth was removed easily, but the longer section was a bit more difficult and had to be removed in the same direction it had entered.

“This was done via an incision in the neck over the bulge.

“After the stick had been removed, the tract was flushed with copious amounts of saline to remove any stick debris and reduce the chance of infection.

“The wounds were cleaned, and the neck wound sutured.

“The mouth wound was left open to drain and to heal on its own.

“Willow was sent home with antibiotics and lots of painkillers.

“Willow appears to have fully recovered from her accident now and is purely on soft toys only to play with.

“Her owner allowed us to share this story to help educate people about the dangers of sticks.

“This is not an uncommon injury and is often far worse – and can be fatal.”

The HR business partner said: “We were getting near the end of the field where I take my dogs.

“I was putting Brinkley on his lead when I heard a bloodcurdling cry, it was horrible.

“She was a way over the field, I ran over to her and I could see her mouth bleeding profusely already.

“I tried to open it and she was crying.

“All I could see was about two inches of a thin slither of stick.

“We assumed it was that to start with, about two or three inches stuck in her gum or mouth.

“Luckily I decided not to touch it or try and pull it out.

“I got her back into my car and took her straight to the vets.

“Ian Taylor, the vet I saw, got her straight in.

“We didn’t know the full extent of what happened till they knocked her out and x-rayed her.

“A couple of hours later she had undergone emergency surgery.

“He rang me a couple of hours later and said they found this stick almost 30cm long and it had penetrated under her tongue, right through the back.

“It had just missed her spine and all her major nerves and vital organs.

“It’s gone straight through the middle.

“They removed it through her shoulder. 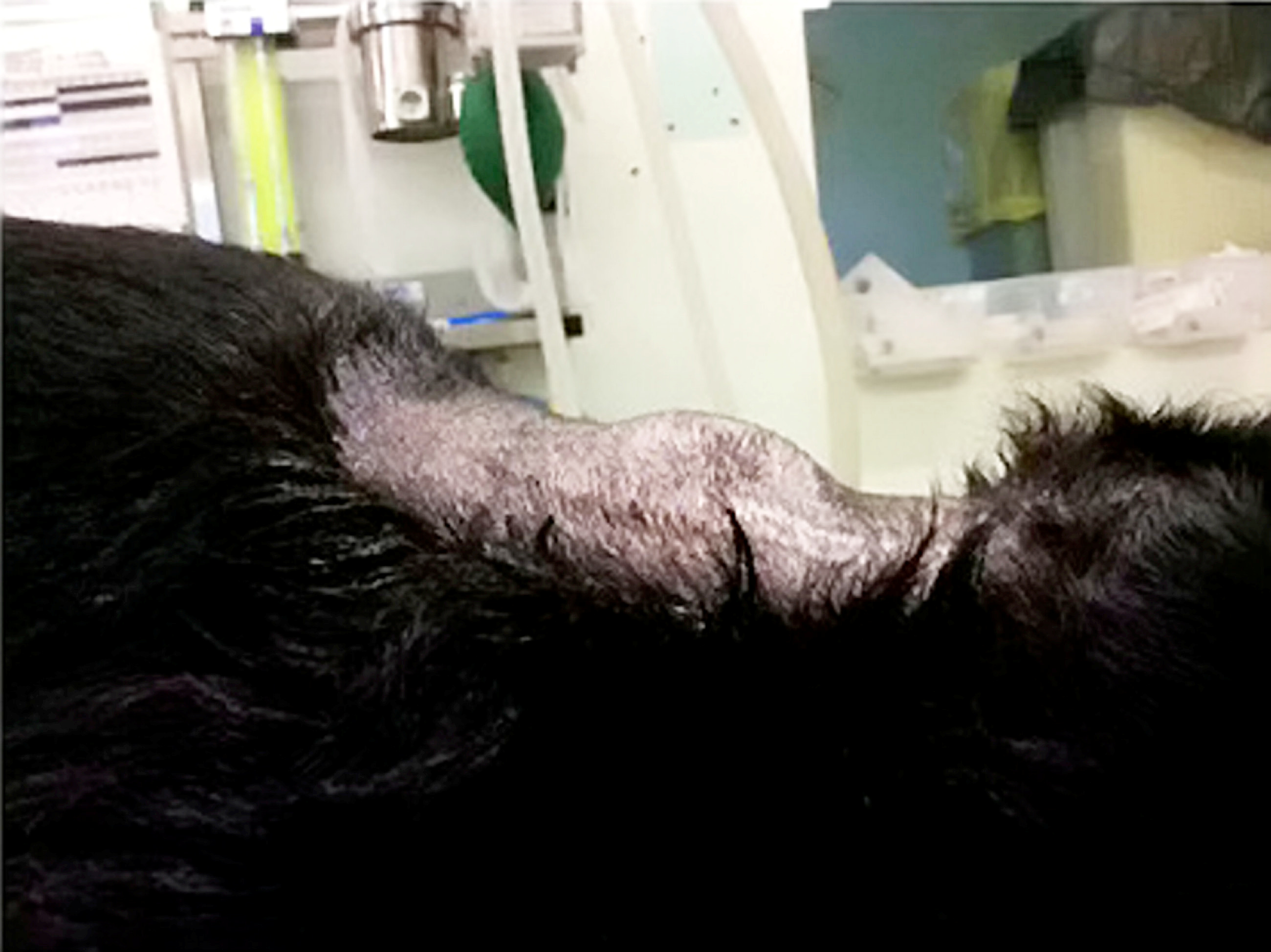 “They said she was very lucky, if she had been a cat she would have used two of her lives on this, the vet said.

“He said he has never seen anything like it, how it missed every single vital organ.

“She could have died from it, easily.

“I have been guilty of throwing sticks, but I didn’t actually throw this particular stick.

“She flips them in the air and catches them, she does it herself as well.

“I don’t know whether it was flipped and stuck in the ground and she had gone to get it, and instead of grabbing the side it impaled her.

“It was quite chunky, it was only the thin sliver we could see.

“It breaks your heart to realise how amazing and resilient they are.

“The first couple of days afterwards she was feeling sorry for herself.

“She went for a little walk on the lead but by Monday starting to bounce back.

“Two weeks after she had the stitches removed and was completely back to normal.

“She had a hefty dose of painkillers, antibiotics and anti-inflammatories.

“She had to go back the following weekend after a reaction to the stitches.

“She is on soft toys and balls, I need to take ownership of a tennis ball company the rate they go through them!

“Thankfully she is really responsive, she doesn’t like being told off – if I say ‘no’ or ‘drop’ she will do.

“She has tried, even today, to pick up a couple of sticks, so I just gave her another ball.”

Helen, who has two kids and three grandkids, said she is hoping to share Willow’s story to stop other dog owners throwing sticks. 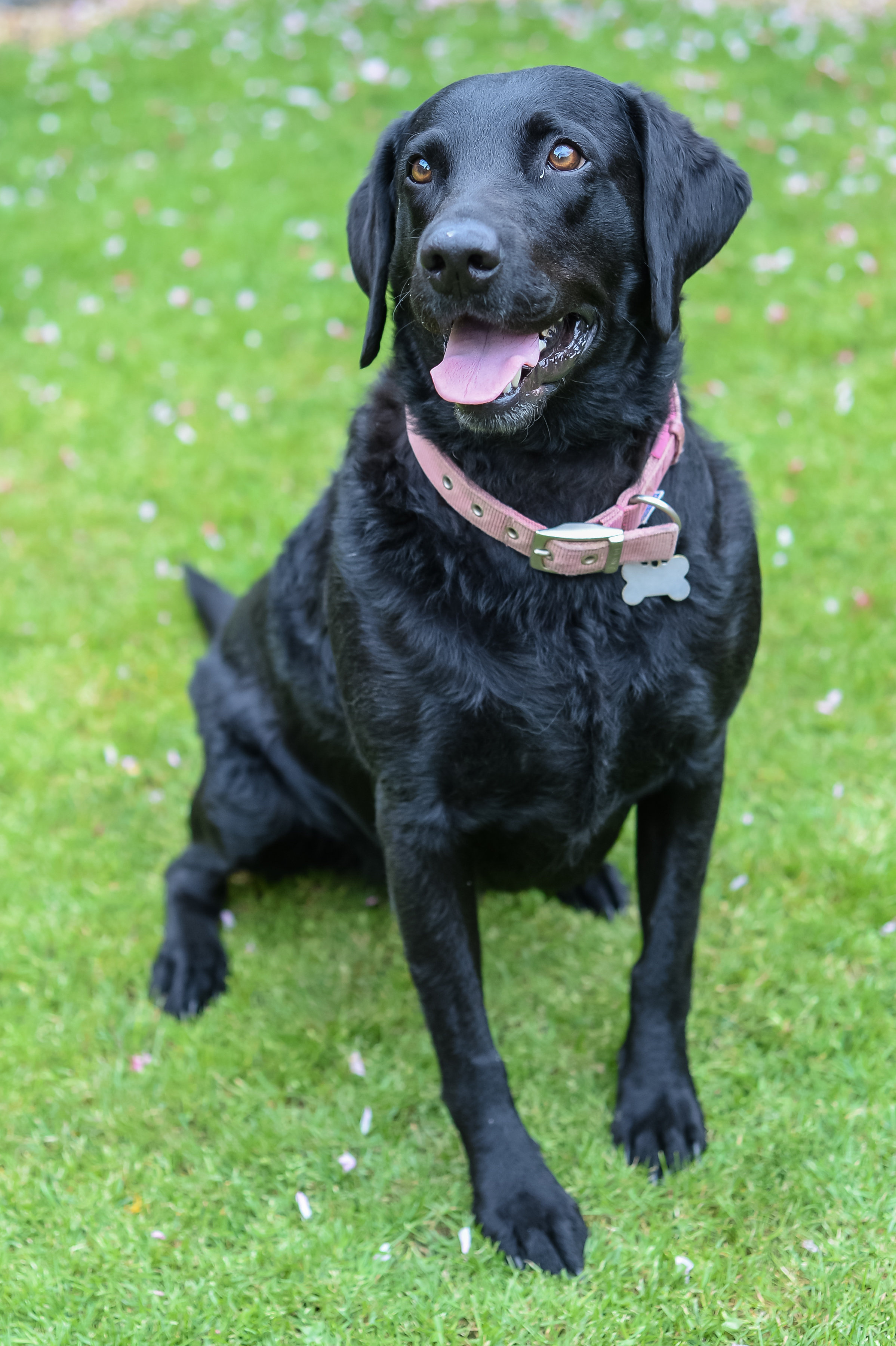 She said: “We all know that we shouldn’t really throw sticks.

“Unless something like this happens, you don’t think about how horrific an injury they can have, and so easily as well.

“It happened in a split-second at the end of a two-hour walk.

“You do always have concerns but always more of a concern of splinters, you never actually think something like that could happen.

“I couldn’t feel any worse about it, that’s why I’m so adamant about raising awareness about it.

“Everybody I speak to who has a dog, it’s their own choice if they throw sticks but I will do everything I can to ensure everybody is made aware how easily it happened and how easily it can happen to them.

“I wouldn’t want either of my dogs to go through something like that ever again.

“The pain and emotional stress it causes for the owners as well is horrendous, but dogs can’t speak for themselves so it’s our duty these things don’t happen to them.”