Aston the bull with his owner Sabine Rouas,43.

Meet the bull who thinks he’s a HORSE – and is even brilliant at showjumping.

Sabine Rouas, 43, met Aston the bull five years ago when she started helping out at a nearby cow farm.

She formed a close bond with the newborn calf – then called M309 – and convinced the farmer to let her buy him and save him from slaughter.

Animal-lover Sabine raised him alongside her pony Sammy, now 10, and noticed the baby cow was picking up the tricks she was teaching her new horse. 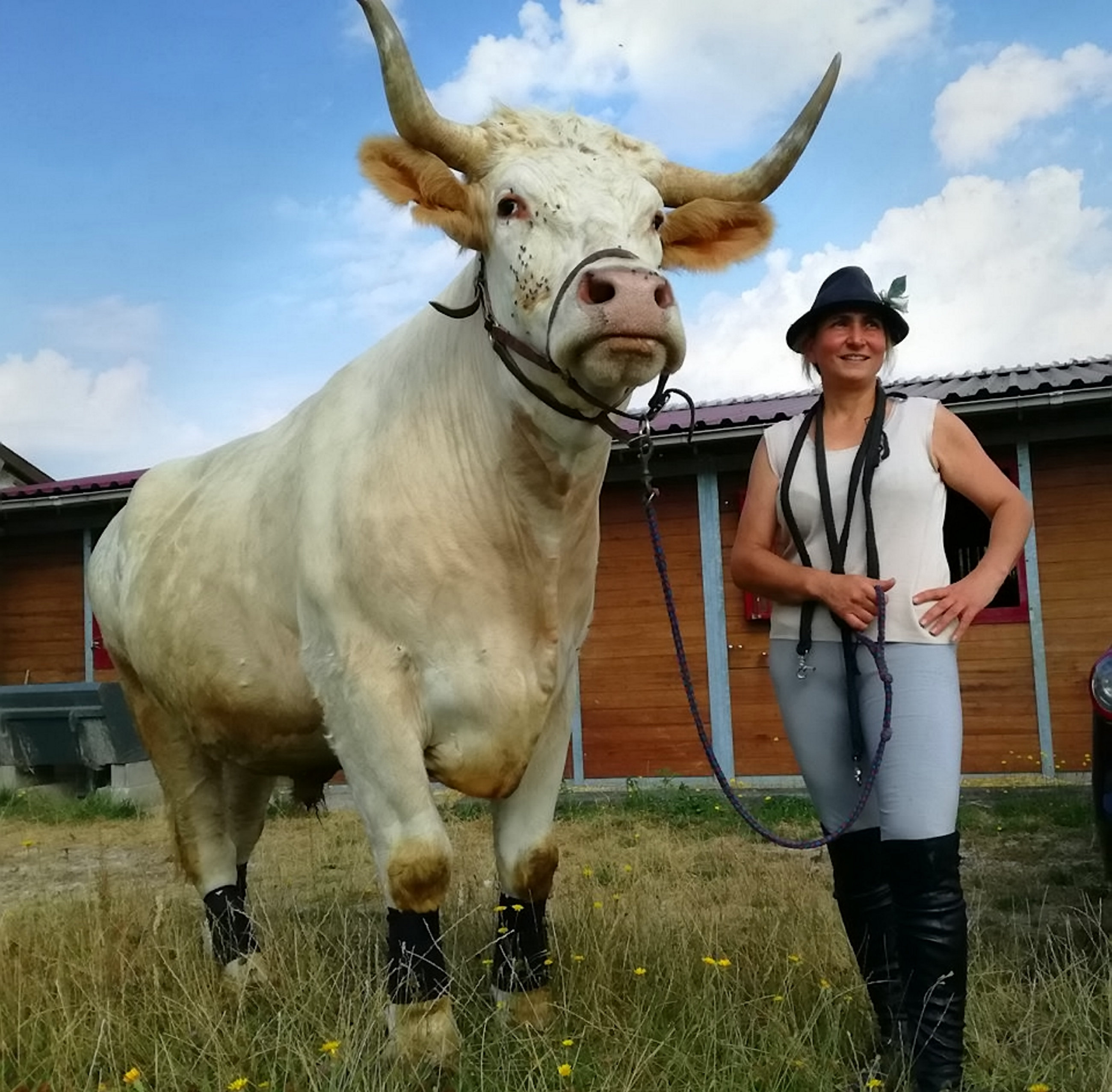 He quickly mastered trotting, galloping, stopping, going backwards and turning around on command, and responding to Sabine’s voice, just like a horse.

And despite being 1.3 tonnes, it took just 18 months to teach him to leap over 1m high horse jumps in their dressage ring – with Sabine on his back.

Now the pair tour fetes and horse shows around Europe to show off Aston’s skills.

Sabine, from Verdun, France, said: “I joke that he’s the man in my life, but we are really close.

“I have had him since he was a baby, taking care of him since the very early days.

“I think that bond is one of the reasons behind his talents.

“He completely executes dressage exercises, just like a horse.

“He completely follows orders given to him by feet and hands.”

Management trainer Sabine took in Aston in 2013, following the death of one of her horses.

She said Aston was the most “endearing” of the herd, and he started following her around whenever she was around.

She convinced the farmer to let her adopt the cow when he was a few months old, and took him home to her stables.

“He was male so he was destined for food after three months,” she said.

“I had to fight with the farmer to keep him. The farm didn’t want to keep a male bull.”

She rehomed him at the same time as Sammy and they would both go out for exercise together.

“I was teaching Sammy some basic tricks, and Aston was taking notice,” she said.

“I tried to teach tricks to Aston. It wasn’t riding him then, but tricks like following my voice, and walking him.

“That’s when I had the idea of trying to ride him when he was bigger.”

She then had to get him used to having a thin rope around his breast, and a cover on his back – in preparation for her riding him.

“It was quite complicated at first, but he was quite receptive,” she said.

“I spent more and more time with him. He was quite good at the things I was teaching him, and was picking it up faster than the horse.

“He saw it as a game. Aston and Sammy both had horse boxes next to each other.

“More and more people started to take an interest in seeing Aston.” 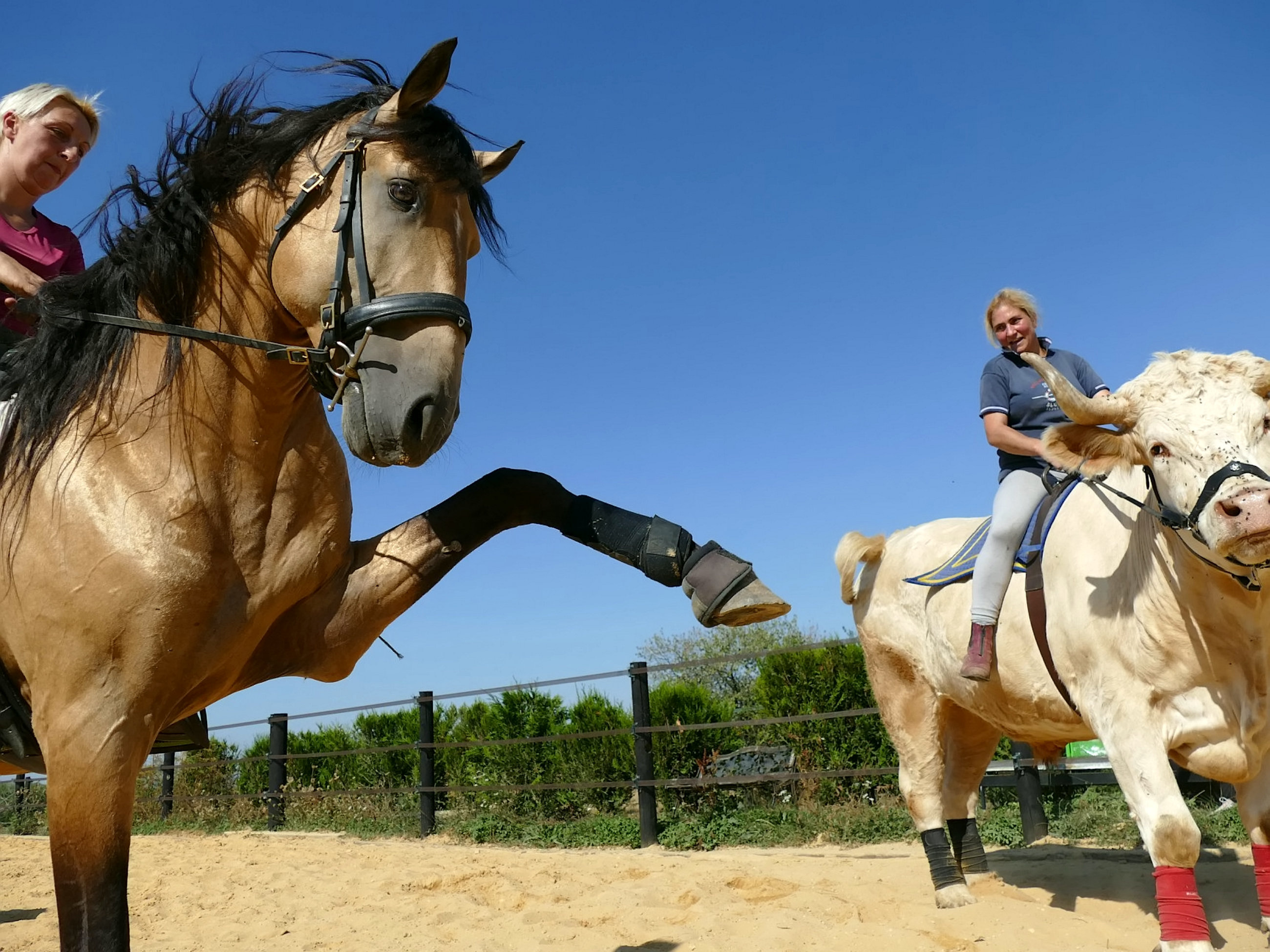 It took a year until he could jump, and a further six months to ride with Sabine on his back, using a bit of carpet as a seat, and elastic around his neck.

The pair now travel to fairs and horse exhibitions in Europe, and crowds gather to see him perform.

Married Sabine, said: “We get a good reaction. Mostly people are really surprised and initially they can be a bit scared because he’s big – much bigger than a horse.

“Even people working in farming are sometimes really scared around him. Most people – even farmers – don’t like to get too close to cows with horns.

“But once they see his real nature, and see him doing the exercises, they often say ‘oh he’d really quite beautiful’.

“Children in particular really like watching and getting the chance to be close to him.”