Guy Booth, 10, plays with his digital chanter, connected to a music program, at his home near Sheffield, South Yorks.

A defiant schoolboy has become the first person in the world to learn to play the bagpipes – using only ONE HAND.

Ten-year-old Guy Booth decided he wanted to learn the pipes after seeing his uncle playing on his parents’ wedding video when he was just five-years-old.

But as he was born with a congenital abnormality called symbrachydactyly, his left hasn’t formed properly meaning he had to work around playing an instrument needing two hands, an arm and a mouth to play.

Not a hurdle for ambitious Guy.

Guy’s mum, farmer Mary Booth, 45, is from Edinburgh so the traditional Scottish instrument has always been a big part of her and her family’s lives.

Devoted Mary said: “I am from Scotland and my brother, Nial Mackinlay, plays the bagpipes.

“We are always visiting Scotland and I am proud of my Scottish roots.

“I am especially fond of the Edinburgh tattoo.

“It was no surprise that Guy also loves the bagpipes. When he saw his uncle playing at our wedding he asked if he could play too.”

But it was only when Mary discovered the One Handed Musical Instrument Trust charity that they set the ball rolling.

They put the family in touch with a PhD student Duncan Menzies, who was developing a digital chanter – the hand-held recorder-like section of the instrument – and bagpipe for a project named P-bROCK.

Duncan’s instrument has a digital chanter which features infra-red reflectance sensors, mounted inside the tone holes to detect the player’s finger movements.

It allows the instrument to be played by musicians with the use of only one hand.

Defiant youngster Guy has lessons once a week with Duncan via Skype and once he masters the one-handed chanter attachment, he can plug it into the bagpipes to perform.

After learning for only two months Guy has already mastered playing Amazing Grace.

His dream now is to play in front of a huge crowd at Edinburgh Castle.

Guy said: “Playing in Edinburgh would be so cool.

“I’d be in front of loads of people, being different to everybody else.

“I’ve got a bone missing in my left hand I’ve got five fingers but some of my fingers are really small.

“I’ve always felt special with it.

“My mum is Scottish so when we go up there we see my uncle Nial and he plays the bagpipes, so I’ve seen them before.” 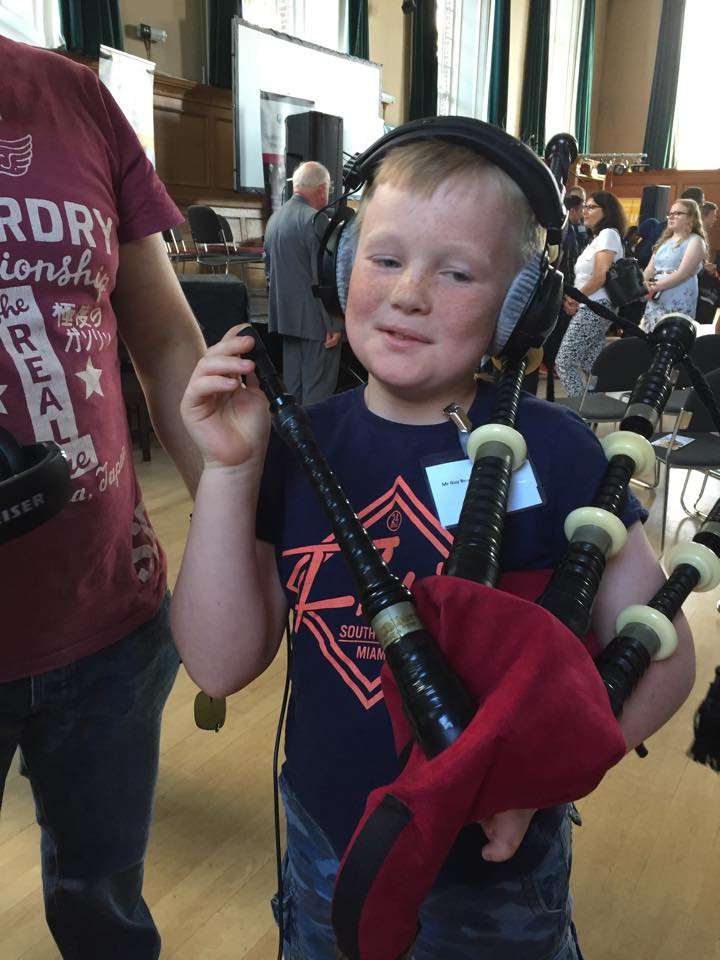 Mary said: “Duncan created the bagpipe specifically for Guy, he is amazing.

“The digital bagpipe Duncan created is the first of its kind and Duncan and Guy have the only two versions that exist.”

Mary said Guy’s condition has never held him back and he takes life in his stride.

He has already mastered the recorder, swimming, skiing, scuba diving and has a black belt in karate.

She said: “Nothing holds Guy back.

“We have always just treated the condition as normal.

“We were told at my 20-week scan his fingers were not forming as usual but it has never changed his determination to do anything he sets his mind on.

“He has done so many sports already and wants to learn as many songs as he can to be able to perform the bagpipes.

“His idol is Olympic road and track racing cyclist and swimmer Sarah Storey who has the same condition as him and he has a signed picture of her in his room.

“We are very proud of him.”

The Scottish Great Highland bagpipe is famous worldwide, with the surge in popularity boosted by large numbers of pipers trained for military service in World War I and World War II.