Nathan Robinson playing his drainpipes drums in the city centre of Manchester.

An innovative musician has been dubbed the “plumber drummer” – as he performs on a modified set of drainpipes using FLIPFLOPS.

Nathan Robinson, 18, travels around the country busking on the unique ‘pipe-drums’ which he built for just £500 with parts from a DIY store in August 2017.

He uses flip-flops on the pipes to sound out seven different notes and has created two full tracks to play to huge audiences on the streets.

The unconventional busker found the idea after watching an Australian named “Pipe Guy” – who travelled across his country and became a viral sensation.

Now Nathan, who studied at Leeds College of Music, has taken up busking full-time and said the reaction to his unique act has been overwhelming.

He said: “I used to play on pots and pans which people were starting to get bored of.

“I knew I needed a new act and I came across the Pipe Guy on Youtube, I was so impressed.

“I went to the DIY store bought a bunch of materials. I had to keep going back and forward to keep adding to it and it was trial and error but it came together in the end.

“As I created the set from scratch I think it is the only pipe-drum style act in the country.”

Nathan has been a drummer for over seven years but decided to turn his hand to busking as a teenager.

He said the reaction he receives whenever he takes his new act out is “amazing”.

Nathan, from Cleckheaton, West Yorks., added: “On a good day I would have 30/40 people watching the act, sometimes people come over within seconds of me starting.

“Everyone is interested in the act, how I made the pipes and which tunes I can play.

“It has got to the point where I have answered the questions so many times it has become a daily thing.”

Talented Nathan – who can also beatbox, juggle and solve a Rubik’s cube in under two minutes – originally used a “strange combination” of a shoe insole attached to a drumstick to play the notes.

However, he realised the flip-flops would be the “perfect” idea to cover the pipes and create the best sound.

He said: “When I first made the set I tried a few different options but nothing seemed to make sense.

“Then I realised the Pipe Guy had used flip-flops and it just works perfectly.

“People always ask me about why I use them but they cover the whole area of the pipe and it is the best way to play the note.

“I reached out to the Pipe Guy and he answered a few of my questions which was great.”

Nathan busks up to four times a week and is so successful he has been able to perform full-time.

He said he now hopes to expand his social media presence and his act by creating
two more sets of pipe-drums. 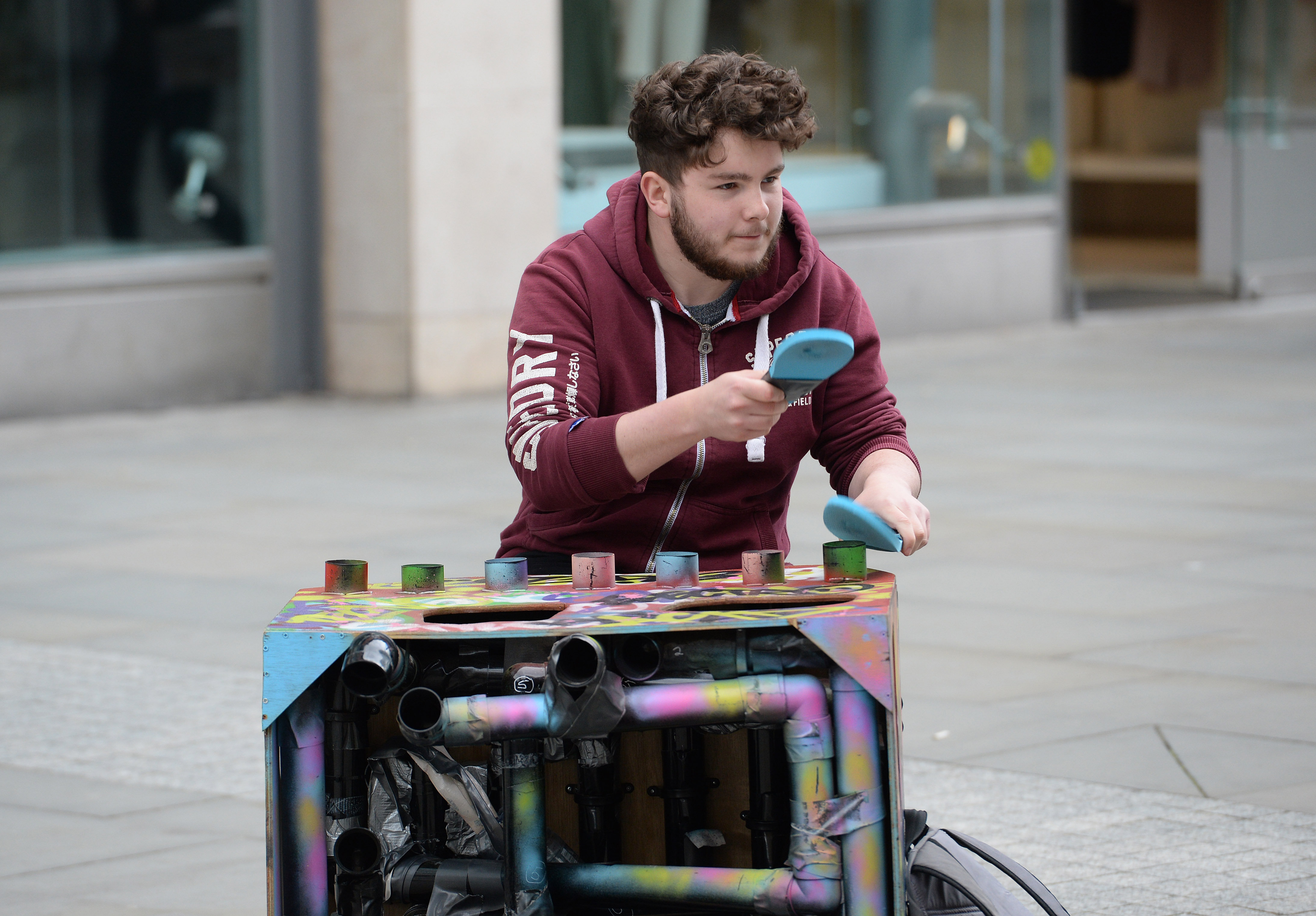 He added: “If I can create two more sets I would then have 21 notes and be able to play a much wider variety of music.

“I want to learn new tracks and it would be a big help to have more sets.

“I have set up a Facebook page to add videos and information about my act and will be making business cards, I really want to expand what I am doing.

“The more pipe sets I have, the better my act will become for the audience.

“My aim is to create an hour’s set worth of music and I’m sure I will be able to in the future.”