Tony Randell and his wife. Tony, a British tourist has been hailed a hero after he bravely jumped into the sea to rescue a drowning child while on holiday in Turkey.

A British tourist has been hailed a hero after he bravely jumped into the sea to rescue a drowning child while on holiday in Turkey.

Tony Randell, 44, had been enjoying a luxury sunshine break for his wife’s birthday when a local boy got into difficulty in the choppy Mediterranean waters.

The former professional darts player leapt into action after seeing a woman frantically waving on a pier while he was sunbathing on Alanya beach.

Tony then risked his life and plunged into the stormy sea and despite badly cutting his arms he was able to rescue the boy and drag him to safety.

Two other boys also managed to escape the waves unharmed after the drama unfolded on a private beach at the Sunprime C-Lounge Hotel last Thursday (19/4).

He said: “I was sunbathing at the time and had my headphones in when I spotted a woman waving on the pier and knew straight away something was up.

“The sea was so rough that day and there were three lads struggling.

“Two of them managed to get out and one was left almost submerged, so I pulled out my earphones and ran in and just got him out as quickly as I could.

“The pier growth was really sharp so that’s where I got all the cuts from. It was mostly just scratches but I had a couple of deep cuts as well.

“It was only after I came out of the water I realised what I had done. I thought: ‘What did I just do? I might not have been coming home.

“It was just instinct I suppose. You could say it’s the best of British in me I suppose.” 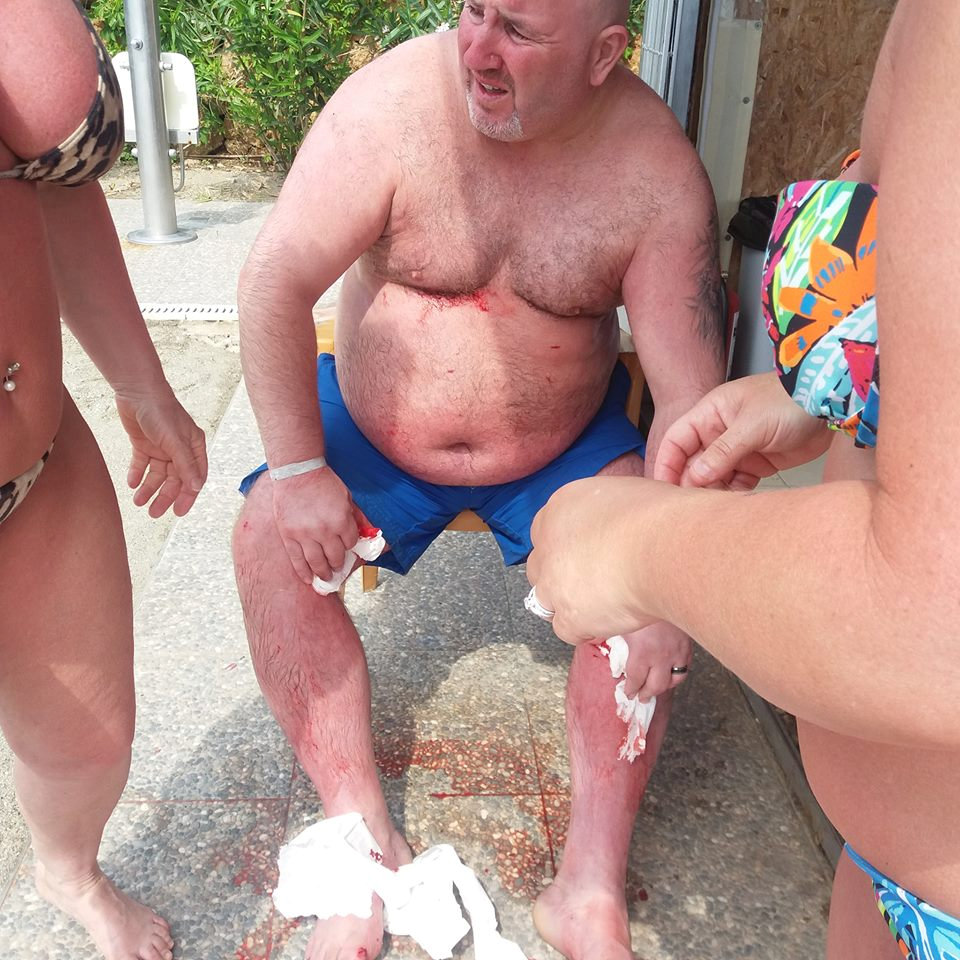 Photos of Tony after the rescue were posted on social media by fellow holidaymaker Jackie Mills showing the nasty cuts has had suffered from jagged pier edges.

Jackie, of Manchester, added: “My friend and I were on the pier on sun lounger. The sea was very choppy and wasn’t safe to swim in.

“But three local boys aged between about seven and-13-years-old went swimming off the pier we were on.

“The lifeguard came up and moved them as it’s for hotel guest only. About 15 minutes later they came back swimming around the pier.

“Two of the older boys got out but they had stopped laughing.

“I looked for the third boy. He was struggling under the pier to keep afloat.

“I remember looking at his scared face as he was sucked under.

“I screamed for help and out of nowhere this man was in the water heading under the pier.

“I looked in the water and saw Tony holding the boy above the water.

“He managed to cling to a post, the life guard came at this point but a German man was already on the ladders of the pier to assist.

“Tony managed to get the boy to the other man on the ladders.

“The boy ran off with his friends. He appeared OK.

“However, Tony was bleeding a lot from multiple scratches on his arms and legs where he was thrown into the post by the waves.

“He was treated by the hotel’s nurse. There is no doubt in my mind that if he hadn’t got to the boy when he did, the boy would have drowned.

“It’s a day I won’t forget in a hurry. The look on that little boys face just before went under the water will stay with me for a long time.

“I would have jumped in if the man hadn’t and I knew I would have drown as I cannot swim.

“That’s how desperate the situation was. Thank god this man got to the boy when he did. I spoke to him at the evening.

“He was playing the situation down and didn’t think he was a hero.”