Blue Martin, 11, who has autism, with the signs he received from Toys R Us in Gloucester after it closed.

An autistic 11-year-old left ‘devastated’ by the closure of his local Toys’r’Us has been given official logos and signs – to build his own shop at home.

Blue Martin had been visiting the giant shop since he was a tot and used to rewatch all of their adverts on YouTube.

His parents had to console him for weeks following the announcement of the closure of his local shop.

Mum Becky Martin, 43, tweeted the store to ask if Blue could have something to remember them by. 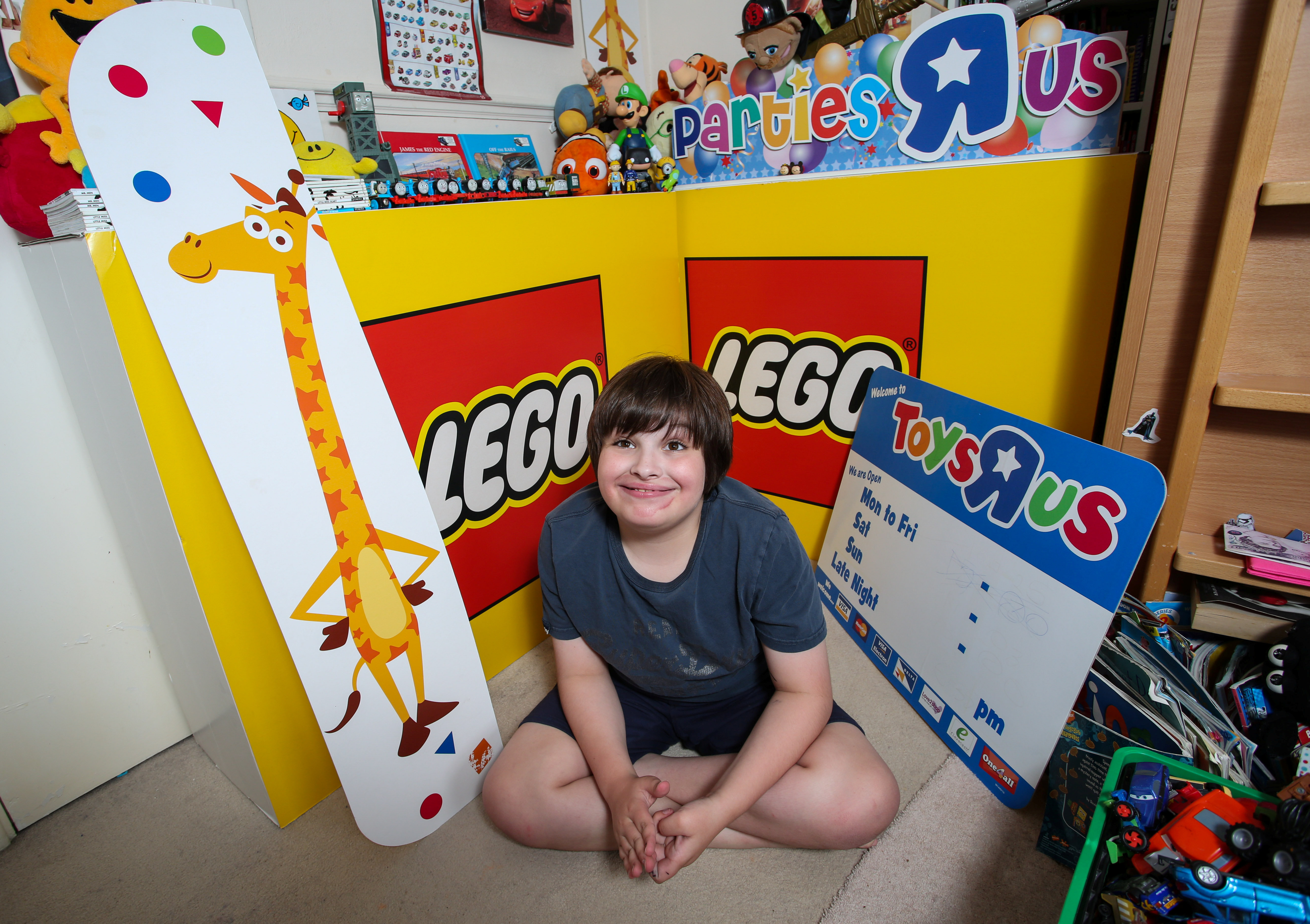 The store’s receivers went out of their way to help – and gave him opening times signs, logos and a giant Geoffrey Giraffe.

Blue has now transformed his room into his very own Toys’r’Us.

Mum-of-four Becky, from Cheltenham, Glos., said: “”He had been so upset for weeks and weeks. It helped him settle his mind that it was shut.

”The signs are all crowding his room which he is trying to turn into his own Toys R Us.”

She added: “He’s still really upset he won’t be able to go there anymore, but it helped to give him a bit of closure.

”He needed to see it closed to understand it had gone but he also wanted a sign for his room to remember it by.

“The receivers arranged for Blue and me to meet them at the store, literally on their last evening before the key handover to the landlord.

”They were so nice, and they made it very special for him. It was so good of them.
He was very chuffed – he felt as if he was bringing home a bit of Toys’r’Us.”

Becky Tweeted the store in the Peel Centre on the day of its closure, April 23, writing: “Dear Toys R Us I am sorry to hear your Gloucester store is closing today.

“My autistic son Blue is devastated and would really like one of your logo signs please. Is this possible? We would pick it up today.”

She explained: “He likes the big toy stores because they do bigger collections of things.

“For instance, he’s been collecting Thomas the Tank Engine toys since he was tiny – he’s got every type of Thomas in every colour.

“He’s really into logos and signage – but this is the first logo he’s actually got. He was completely in awe of the size of the unit.”

Within hours of Becky’s tweet the store’s receivers, Gordon Brothers, got in touch with Becky and arranged the gifts.