Hayden (RIGHT) and Holden (blond hair and blue eyes) Keller might be twin brothers but they couldn't be further from identical, having inherited different skin tones from their mixed-race parents.

These mixed-race boys are actually TWINS – despite the fact one has dark skin and the other is white.

While Holden Keller inherited blonde hair and blue eyes from his mum Amy Keller, 36, his brother Hayden got darker skin and brown locks from his African-American dad.

Amy, who is raising the 15-month-old fraternal twins on her own, was told she was expecting identical twins during her pregnancy as the babies were sharing a placenta.

But when the babies were born just seven minutes apart in December 2016, it became clear that they were far from identical.

The boys, who were born prematurely at 29 weeks, attract attention everywhere they go, and people find it hard to believe that they are even related.

Mum-of-three Amy, a veterinary technician, said: “Holden has blonde hair and fair skin like me – I think my family is mostly of Scandinavian and German descent.

“Hayden is darker skinned like my ex-partner, he’s African American.

“Unfortunately he’s not in the picture anymore and I’m raising the twins on my own.

“When they were born they were so little that I didn’t really notice Hayden’s skin was darker until about three days later.

“They were connected to so many machines in the NICU.

“When I realised I thought it was funny because all along my doctors were convinced they were identical.

“As they’ve gotten older their differences are so striking, sometimes people don’t even believe they are brothers.

“Their personalities are so different too.

“Hayden is completely fearless. He is a little daredevil.

“He’s the first one to leap off the couch and to jibber jabber with anyone who will listen. He’s so outgoing.

“Holden is a little mommy’s boy, he’s a bit shy and really cautious. He is definitely the follower.

“They both just love dinosaurs, and they love growling at our dogs.” 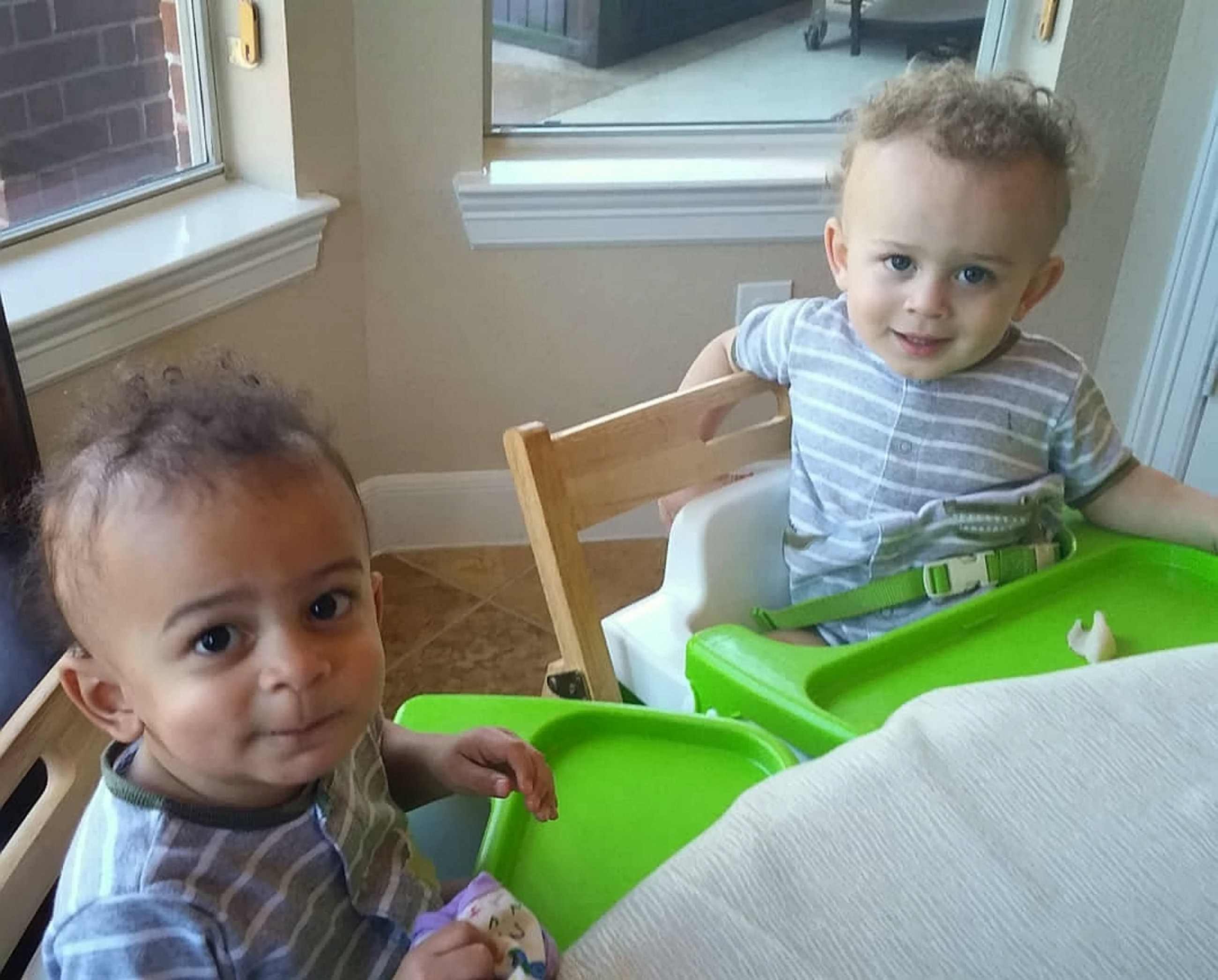 Amy, of Spring, Texas, said while most people are amazed by her striking boys, others can be quite cruel about their physical differences.

“In public people sometimes stop us and completely avoid the fact that they look so different,” she said.

“Others are amazed by it.

“Some people ask me really rude questions like ‘Are you sure they have the same dad?’

“I once posted a photo in one of them of the boys with the caption ‘Their features are starting to look identical’, and people started commenting ‘They’re not identical’, ‘How can you say they’re identical?’ ‘Are they even twins?’

“It does hurt me and it does get to me.

“It’s not such a big problem now because the boys are so young, but I do worry about when they grow up a little bit and start to recognize their differences.

“I worry about people grilling them with questions like ‘Is he really your twin?’”

Amy, who is also mum to 15-year-old Layla Stewart, said because her twins’ father is not in their lives, her dark-skinned son might struggle being different in his large Caucasian family.

“They have no awareness that they are any different from each other now.

“The boys’ dad isn’t in the picture and that’s unfortunate, but it’s his choice.

“My family is Caucasian so I do know there will come a time when I will have to have a talk with Hayden.

“When the time comes I will just explain to him that Holden and him are brothers and nothing can change that.

“But I just hope to build the foundations of love and acceptance which will hopefully help him through any issues he has.”