A creepy stalker who pretended to be a policeman has been jailed for four years after he bombarded her with up to ’50 texts a day’.

Charlotte Kendall, 20, first met Terry Waymark, 36, when she served him during an evening shift at her local chippie.

He stealthily swiped a business card for her animal portrait company off the counter – and bombarded her with texts, calls and emails.

Scary Waymark asked her on dates, called her late at night and constantly asked to meet up with her – threatening he would return to her workplace if they didn’t.

But Charlotte eventually went to police when he texted her to say he knew she had been on holiday to Cornwall for four days.

Just one day later police pounced on “menace” Waymark and he was found guilty of talking involving serious alarm or distress.

He was jailed for four years and given an indefinite restraining order at Portsmouth Crown Court.

Now with her stalker – also a convicted arsonist – behind bars Charlotte, from Portsmouth, hopes her story will encourage other victims not to suffer in silence.

Charlotte, who is due to study veterinary nursing at university soon, said: “It was constant.

“It didn’t seem to matter if I replied or not as the texts just kept on coming.

“He was constantly asking if he could phone me but I made it clear we could discuss everything over the email and texts.

“But then he asked whether I had kids and if I was single.

“I instantly sent a text back and asking why my current relationship status would affect the portrait.

“Then he was asking if he could take me out sometime as ‘he knew a lot about me’.

“Then he mentioned he would drop off an iPhone 6 at my work so we could talk.

“I was freaked out.

“Then he asked if I worked in the chip shop and if I had gone away to Cornwall and that’s when the penny dropped.

“I realised Terry was the customer who mentioned he was a police officer.

“I’m just glad we’re all safe and he’s locked up. If I hadn’t gone to the police when I did who knows how far he would have gone?

“I still work in the chip shop as I’m putting money aside for university.

“But I’m more reserved with customers now. I just keep it to the basic ‘hello’ and ‘thank you’ as I don’t want to go through that again.

“But hopefully what I’ve been through will encourage others to report potential stalkers.”

Impersonating a local police officer, he lingered around the takeaway asking questions for 30 minutes before politely being asked to leave. 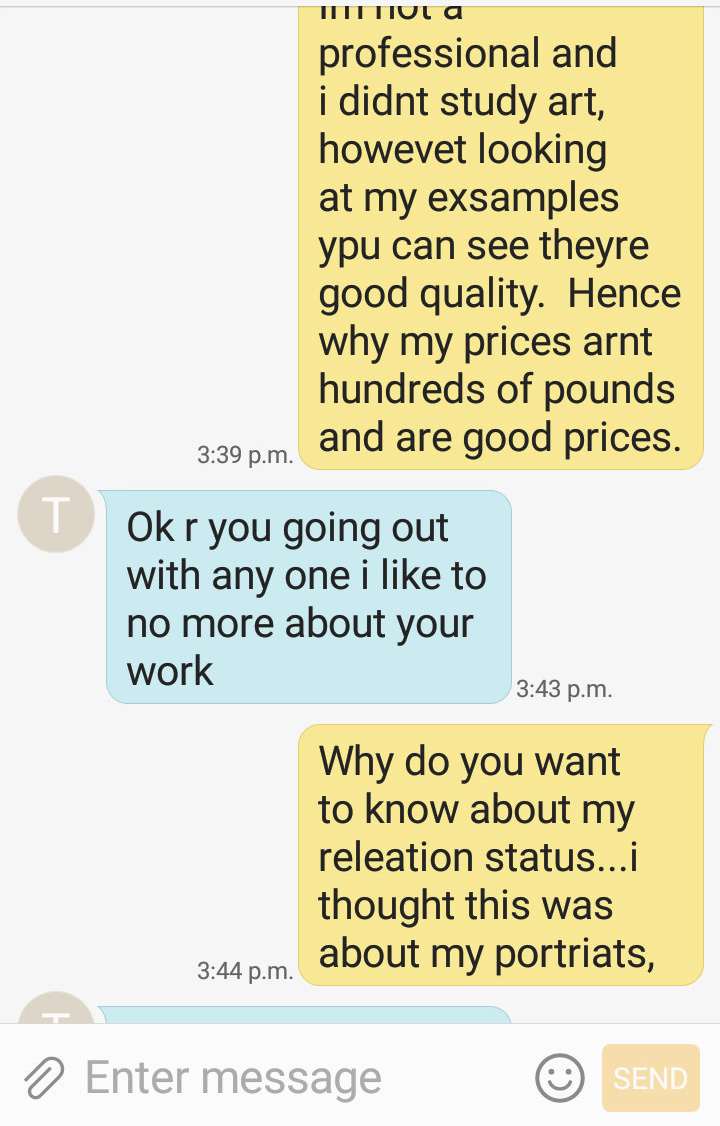 She said: “It around 8:30pm on a typical Thursday when Terry walked in asking for a £2 portion of chips.

“I noticed he was a new face as I’ve worked there four years and know who all regulars are.

“He introduced himself as a local police officer which at the time I thought was an odd thing to do.

“I don’t know anyone who goes around shouting about their job willy-nilly.

“He didn’t mention his name but kept going on and on about his job.

“He was going on about the murder rate and how much of a dangerous area it is.

“Then it was a bit more light-hearted and he asked if I lived in the area and how my day was going.

“But he was looking at my square in the eye. It was just intense.

“Usually customers only wait around if they’re waiting for their fish to be battered but he was just there with his chips going cold.

“My boss had to come over and tell him we were closing to make him leave.”

In what was dismissed as an awkward customer encounter Charlotte turned up to work as usual for the next two weeks.

But while talking to a regular about her upcoming trip to Cornwall the shop door swung open only to mark the return of ‘PC Terry’.

“I was joking about the amount of pasties and ice creams I’ll eat before a man with a bald head and stubble walked in”, she said.

“My initial thought was ‘oh God not him again’.”

“I didn’t want to get stuck in another half an hour conversation so I hid round the back and got my boss to serve him.

“He seemed to be in and out pretty quick and didn’t bother hanging around.

“I managed to dodge him.”

But Charlotte was unaware the creep had managed to swipe one of her business cards with all her contact details. 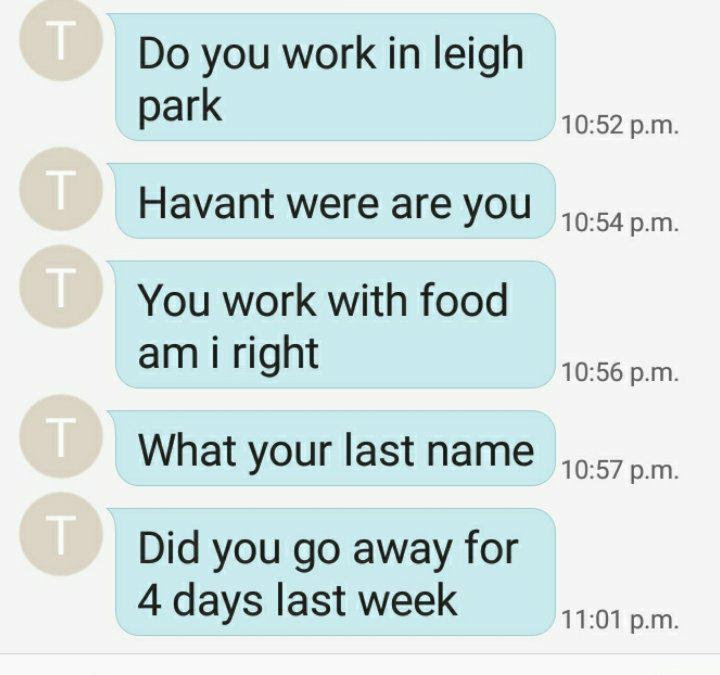 Later that evening she received an email from a potential customer asking for a painting for one of his kids – sealing it off with eight kisses.

She said: “I thought it was weird but needed to put money towards my dog’s vet bills.

“I messaged asking what animal he was after and within seconds I got a reply asking if he could call me.

“I had just finished a five hour shift and was exhausted so I just made the excuse that my phone couldn’t take calls.

“But that wasn’t working. He just continued to ask if he could phone me.

“At this point I just thought Terry was a pushy customer.”

Over the next seven days Charlotte was receiving between 20-50 text messages a day.

Charlotte told her mum who encouraged her to phone the police.

“As soon as I mentioned his name the police officer said ‘Ah, he’s known to us.’

“The police told me to send one reply telling him not to contact me again.

“They then told me if I received a response to come back and they’ll take action.”

Despite assurances from the police that she was in safe hands Charlotte was still fearing her harasser was watching her every move.

Not willing to take any chances she swapped shifts in a bid to avoid bumping into him.

She was also chaperoned by her mum and her pet dog to and from her 20 minute walk to work.

Two days after Charlotte received a message from a new number asking her out.

Realising who it was Charlotte went straight to the police where they arrested him immediately.

He was handed a four year sentence and an indefinite restraining order at Portsmouth Crown Court having been found guilty of stalking involving serious alarm or distress.

Stalker Terry had previously been handed a 24 week sentence for harassing an ex-girlfriend after she broke up with him for impersonating a police officer.

Now picking up extra shifts at the chip shop before heading to Sparsholt College and University to study veterinary nursing Charlotte says she’s looking forward to getting her life back.

Charlotte said: “I was wary of going to the police before as I had the impression they didn’t take these things that seriously.

“But the police acted really quickly and helped me out a lot.

“I had to speak out to protect others.”