This new revolutionary 'plastic-eating' vessel which could clean up the Pacific ocean in four decades has been revealed in a world first.

The world’s first vessel which ‘eats’ marine waste and converts plastic into fuel has been unveiled.

Known as the Ocean Saviour project, the self-powering boat is designed to gobble up to five tonnes of debris per day.

The £40million vessel works by collecting plastic waste which is converted into a synthetic gas which fuels the yacht.

It is estimated she could clean up the entire Great Pacific Garbage Patch – a vast slick of marine debris between Hawaii and California – in 40 years.

The technology was first used at sea on US navy aircraft carrier, Gerald R. Ford, after the navy asked for a compact way of destroying waste during long periods at sea.

But the UK-backed project, led by yacht broker TheYachtMarket.com, is the first private commercial venture to use the technology.

Richard Roberts, CEO and co-founder of TheYachtMarket, said: “Our oceans are a vital resource and it is essential we all do what we can to preserve them for future generations.

“It’s staggering to think that there is currently over five trillion pieces of plastic in the ocean which is having a huge detrimental impact on our ecosystem and the ocean’s biodiversity.

“It’s essential that we remove plastic before it breaks down into microplastics and, through Ocean Saviour, we aim to help eradicate the ocean of this problem.

“I’m especially pleased to work with such a talented group of individuals to help make this a reality.”

The concept designs were unveiled today at the Southampton Boat Show last weekend.

Her designers recommended a large-scale catamaran as the most economical and stable option.

The open plan lower deck will be one of the main working areas of the vessel and has been designed to allow ventilation with hinged storm shutters offering protection from the weather. 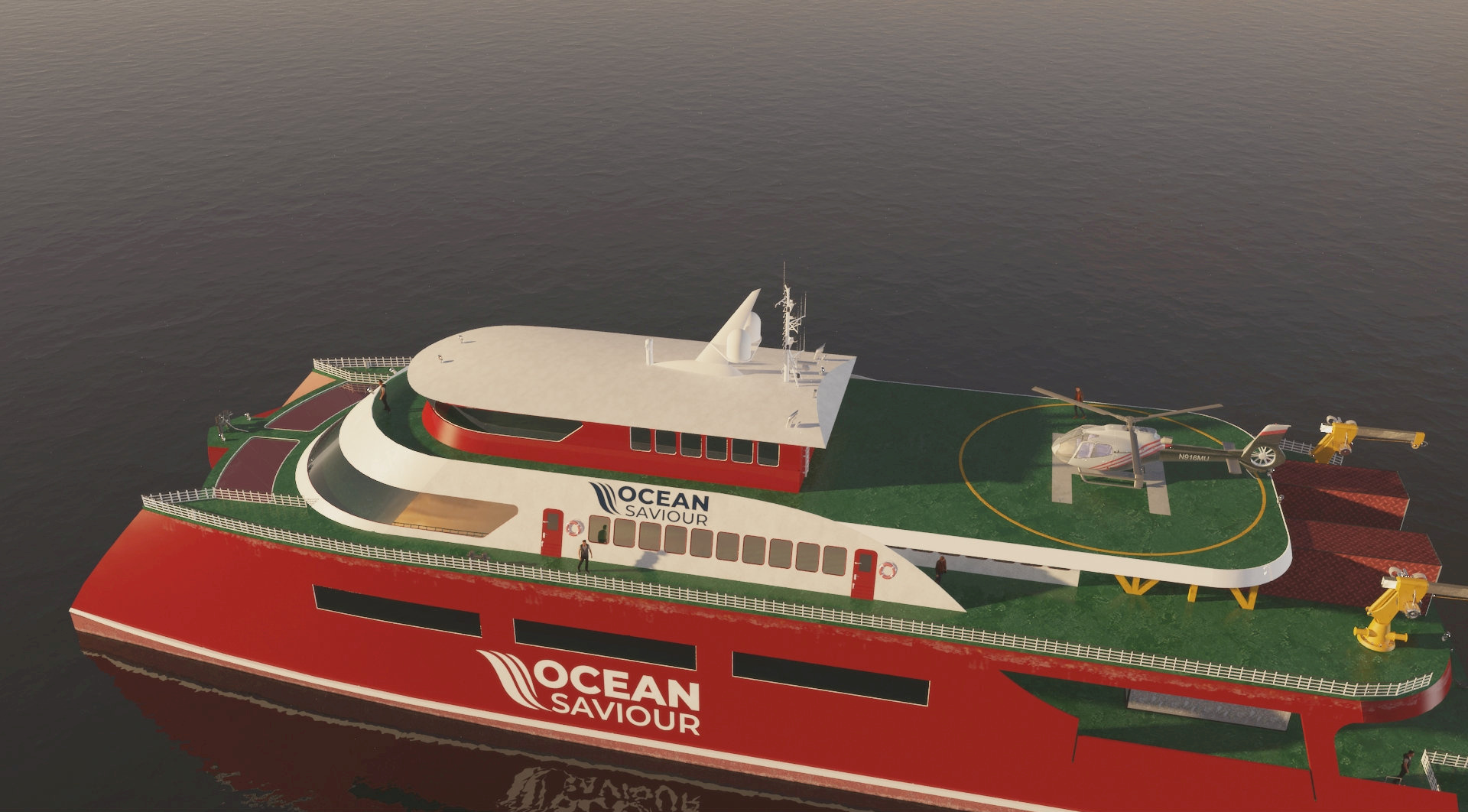 The entire deck is dedicated to plastic removal and industrial-scale recycling while the mid-deck is home to two 12m containers which will offer research laboratory facilities or VIP accommodation and bulk storage area, aft of the crew quarters.

The curved front windows will lessen the impact of rogue waves, green water, and windage and offer maximum visibility for the crew.

Meanwhile, the wheelhouse is located on the third deck which will also house the main crew areas and helipad.

The design of this vessel will allow it to be chartered by relief rescue organisations when disasters strike as it is fuel efficient, fast and stable.

Dr Andrew Baglin of Multiphase Design said: “We produce approximately 300 million tonnes of plastic each year, five times what we produced 50 years ago, and an estimated 8 million tonnes of this ends up in our oceans every year.

“This would mean that one Ocean Saviour vessel would take 40 years to clean up the Pacific gyre using plasma technology, which can, therefore, be scaled if there was more than one vessel in operation.”

Wish you were here! – Cleaner who was given £1,500 by Bristol University students to visit family in Jamaica shares holiday snaps

Wish you were here! - Cleaner who was given £1,500 by Bristol University students to visit family in Jamaica shares holiday snaps