A blood-soaked bride was taken to hospital on her wedding day after a guest ploughed a wheelchair through her leg - slicing open her Achilles tendon.

A blood-soaked bride was taken to hospital on her wedding day after a guest ploughed a wheelchair through her leg – slicing open her Achilles tendon.

Kaileigh Moreton, 29, suffered “excruciating pain” after an exposed piece of metal on the chair’s footrest cut through her lower leg like an “apple-corer”.

She was injured after a guest borrowed the chair missing a protective rubber stopper from a hotel during the reception.

Her dream wedding to her partner of 12 years Phil Moreton, 39, came to an abrupt end as guests got “merry” five hours into the party on May 2 2017.

She underwent surgery and got 14 stitches at a private hospital after the accident at the luxurious five-star resort in Pathos, Cyprus, happened at about 10.30pm.

She screamed in pain as doctors poured antiseptic iodine on her wound – a complete laceration of her tendon – that night.

“It was just a freak accident where he had gone over to get the wheelchair and bring it over to someone with mobility problems who needed it,” she said.

“I was on the dance floor… the last thing I remember was ‘Ain’t No Mountain High Enough’ playing and suddenly feeling a sharp pain in the back of my foot.

“I turned one way and the chair turned the other. A rubber stopper was missing, it acted like an apple corer and it went straight through my heel.

“I remember thinking this doesn’t feel right and stumbling towards a large white pillar and just holding on to that and everyone just rushing over to see what had happened.” 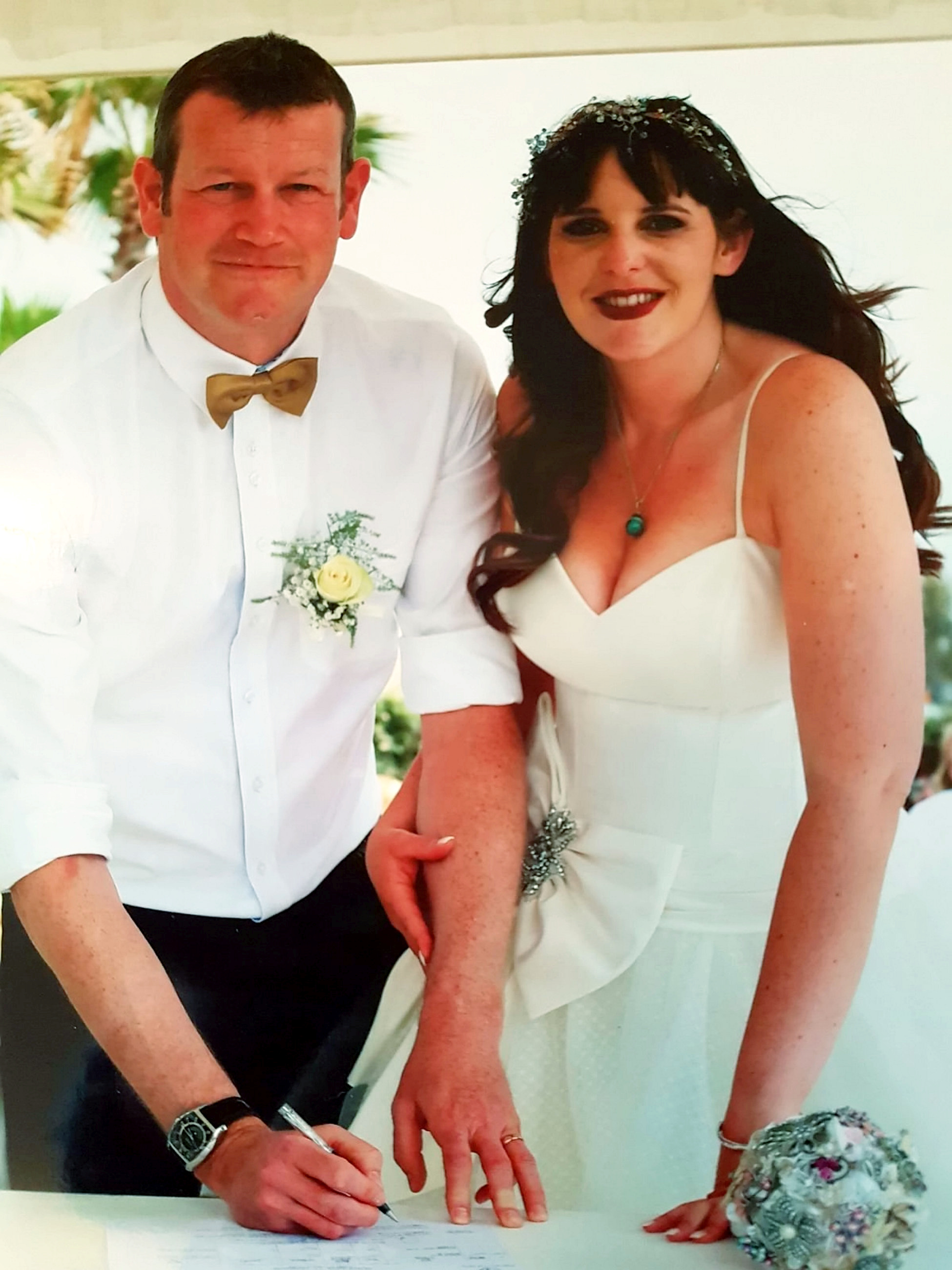 She added: “I just limped over and my mum thought at first that I sprained my ankle.

“I remember holding on to my mum’s arm and saying that it hurt. The only way I could describe it would be floppy – like there was nothing there to hold it up, which there wasn’t.

“The first thing that was going through my mind was what if I cannot walk again?

“[The accident happening on your wedding] makes it so much worse.

“We had planned it for a good year and a half and Phil and I have been together for quite a long time – it is just completely not what you want to happen.

“Ironically I was wheeled back to the hotel in the wheelchair that had injured me because it was the nearest.”

A on-site medic bandaged her leg and tried to stop the bleeding while a taxi was called. 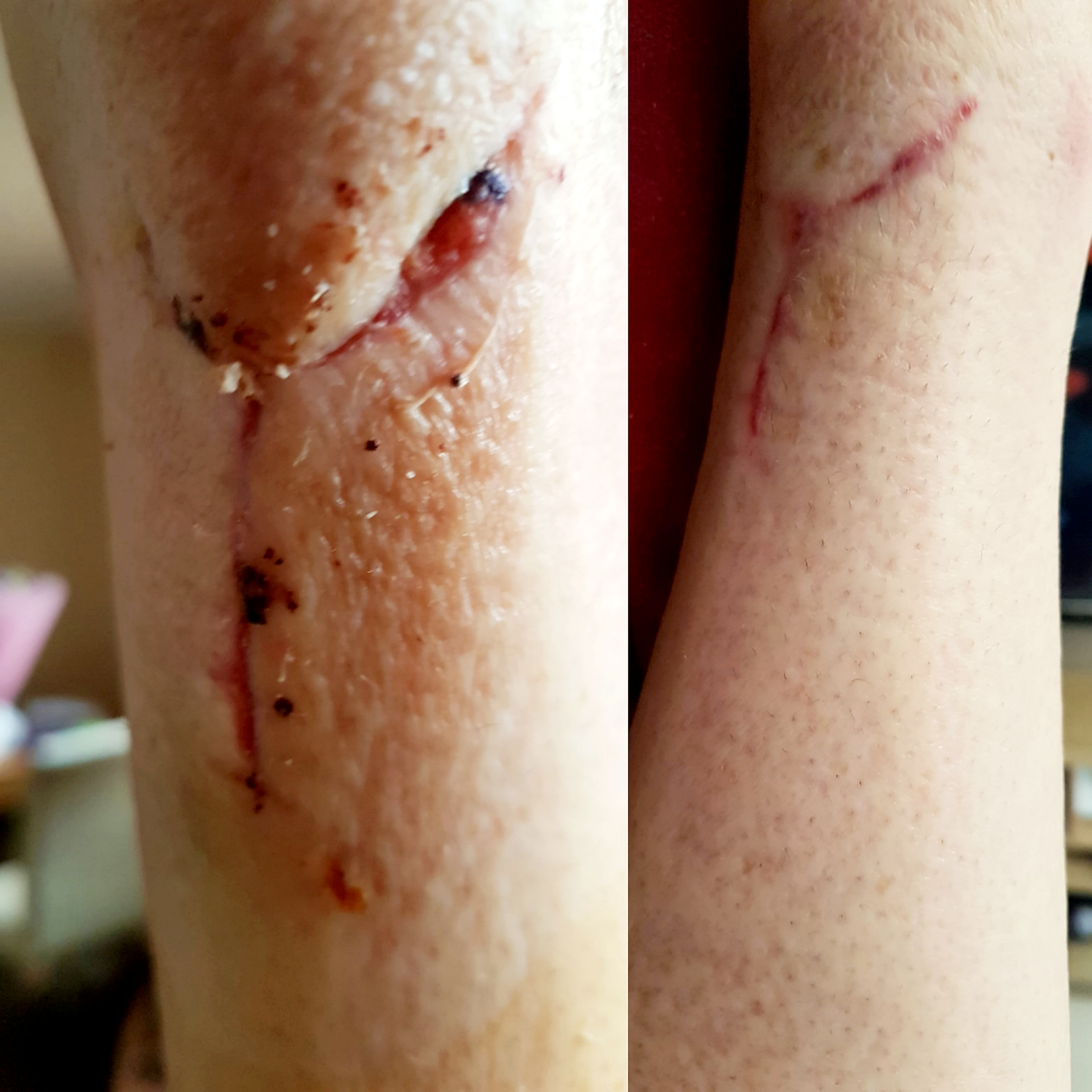 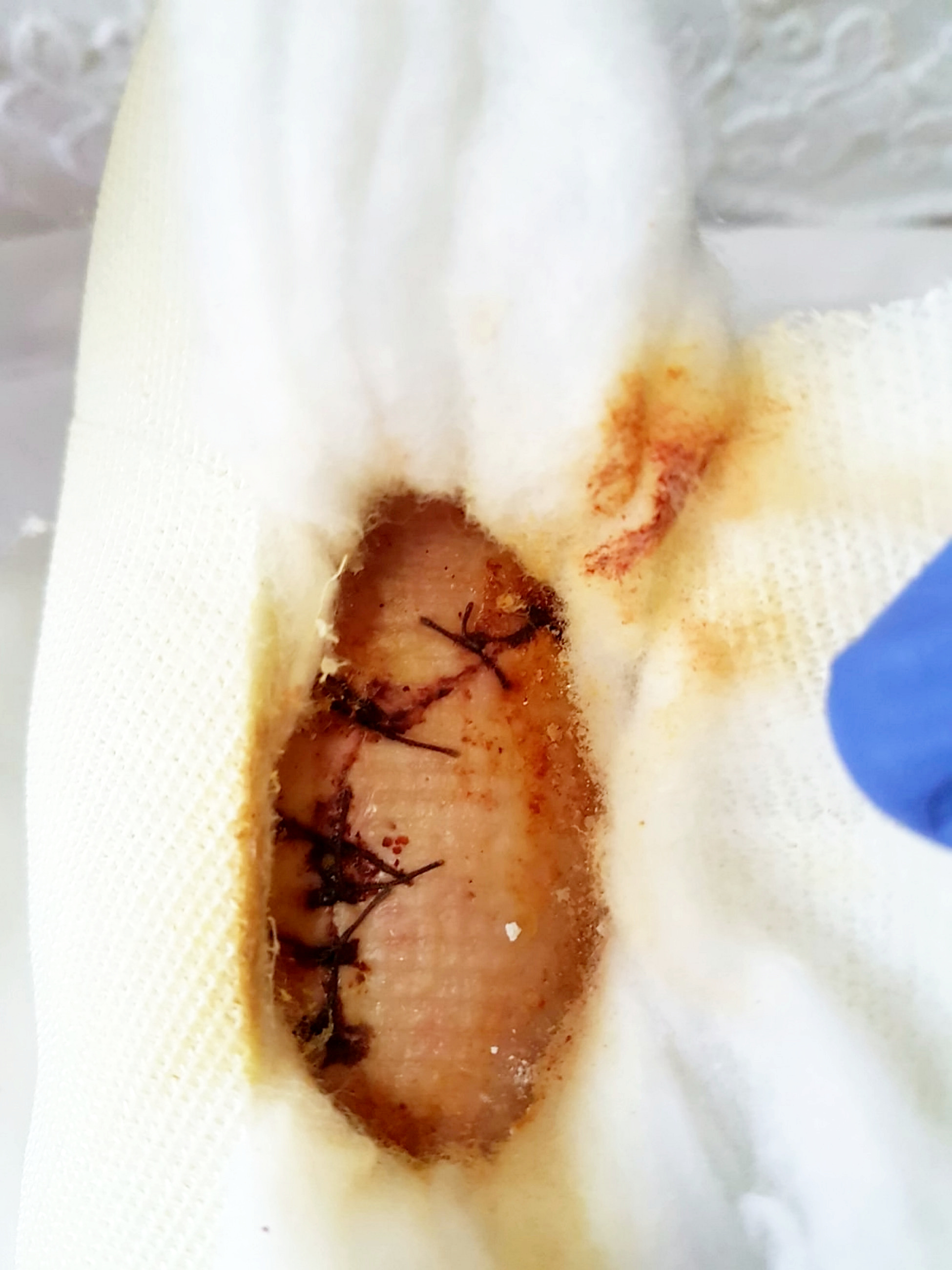 She has spoken out about her ordeal to encourage others to seek professional help after suffering from anxiety following the accident at her intimate 17-guest wedding.

She quickly underwent surgery and spent her honeymoon on antibiotics at the private hospital but often asked “why did this happen to me?”

“A traumatic incident on your wedding, it leaves you feeling quite emotional about it, I suppose there’s a part of you that asks why did this happen to me,” she said.

“When I left I was given another course of antibiotics that I had to take for another month and I was told to go to straight to my GP or an A&E.

“I was struggling. It’s just a complete feeling of fear – I didn’t know what was going to happen when I got home, worried about where I would be in terms of work – as a trainee you generally aren’t allowed to work from home.”

Her and Phil, a lab technician at Cemex, spent more than £9,000 holding their wedding at the Olympic Lagoon Resort and in private sports therapy on her ongoing recovery.

Their health insurers Helix covered the £10-12,000 cost of her ten-day stay at the Royal Artemis Hospital in Cyprus which she likened to actress Urma Thurman’s recovery from paralysis in the film Kill Bill.

Mrs Moreton, due to qualify as a wills and probates solicitor with Penningtons Manches LLP in September, refused to name the guest who injured her but said: “Do you know, we don’t really talk about it that much.

“It’s there and it happened and I’m never going to fall out with him… We’ve grown up with each other, he’s essentially like a brother, it’s not really anyone’s fault, what happened it just happened and it’s unfortunate.”

Kaileigh got engaged with Phil in San Francisco’s botanical gardens in April 2015 and their wedding by the rocky coast which had a matching colour theme to the gardens.

They were due to stay in Cyprus for another five days after their wedding for their honeymoon.

But instead of relaxing, Kaileigh spent her honeymoon hooked up to antibiotics and she and Phil missed out on a booked wine tasting session and boat tour.

She said: “It’s quite difficult being in hospital abroad.

“I just felt isolated because everyone else had flown home after the wedding.

“We sat and watched a lot of action adventure movies.”

Mrs Moreton, from Colchester, Essex, suffered from mental health problems after becoming “isolated” while undergoing physiotherapy and learning to walk all over again.

She spent about £1,000 on private sports therapy at Highwoods Health Centre in Colchester after her left leg was put in a cast.

Ten months on the affected calf is still two inches smaller than her right and she still can’t do a single calf thrust on it.

Mrs Moreton, who has suffered from anxiety problems previously, is still having physiotherapy following the incident.

“It’s a really isolating injury to have as you are unable to do anything,” she said.

“There is a fear of it going again and the fear of not being able to walk properly.

“You don’t realise how much you use your legs, when you have crutches you can’t do anything.

“I had to become reliant on other people which I found difficult.”

But Kaileigh is pushing herself back to fitness and this summer she has set herself the ultimate challenge of taking part in a charity trek along Hadrian’s Wall in aid of the mental health charity Mind.

She said: “I have been debating whether or not to do it, I’m still feeling really nervous about it as I have not walked that distance before.