by Jess Young
in News
2

A woman has posted a hilariously honest advert in a bid to sell her car - describing it as "s***" and "nothing but bad luck".

A woman has posted a hilariously honest advert in a bid to sell her car – describing it as “s***” and “nothing but bad luck”.

Danniella Leigh Edwards, 20, blamed dents and a missing window on her ex-partner – and said the car was leaking some “gooey and yellow” liquid.

Ms Edwards, who bought the 2007 plate Peugeot 207 in January, wrote: “[The] clutch is basically gone because for some reason when I’m driving and I don’t even press the gas pedal it bloody races itself [sic].

“[I’m] pretty sure the head gasket has gone as well, what a shock! [It] has gone all gooey and yellow.

“[I] think the electrics are going because I spend £10 a week on bloody replacing them and no matter how often I do a new one goes each week.

“Quick sell as this car is nothing but bad luck and a bag of sh*t.

“You can drive away today in it if you can bare the bloody annoying sound of the clingfilm blowing away in the wind and no matter how loud your music is you still hear it.”

Ms Edwards did manage to find some positives to highlight in the advert for the “207 death trap”.

Apparently the car – which had clocked up an impressive 102,000 miles – had nine months’ worth of MOT and three months of tax.

Her advert has since attracted much attention online.

An admirer called Bill messaged Danniella and said: “I love the candour in your ad.

“[It is the] funniest think I [sic] read in a long time, I almost wet myself I laughed so hard.” 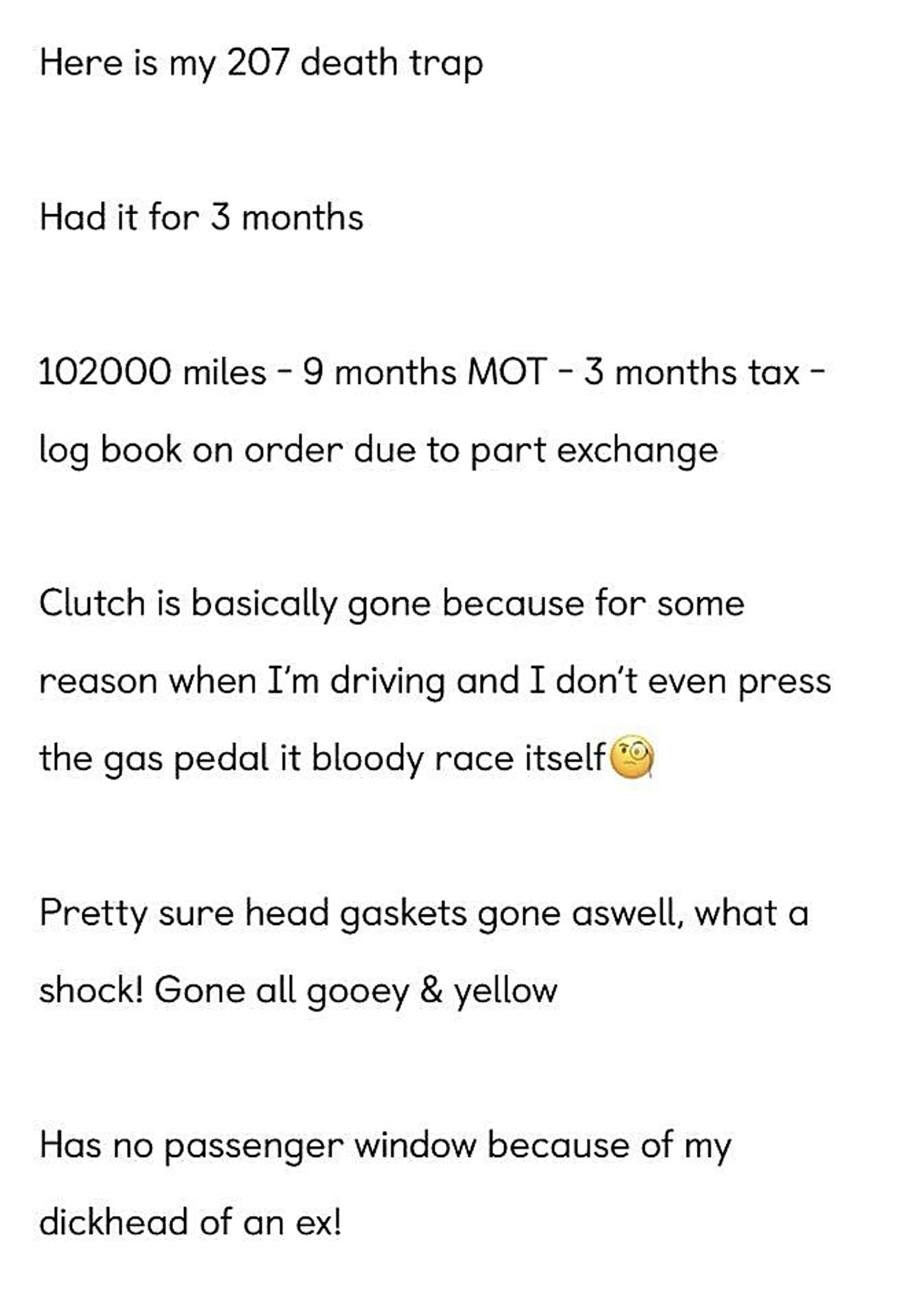 He finished by saying “better luck with your next car”.

The frustrated owner from St Paul’s was asking for a minimum of £200 for the car, and it appears Ms Edwards managed it.

In her response to Bill, Ms Edwards said: “I sold it! God knows how, but I did!”

Who is the noisiest? The loudest sports crowds in the UK

Who is the noisiest? The loudest sports crowds in the UK