The aftermath of last night's crash, in which a woman died after a car crashed in to her house.

A woman in her 90s was killed after a van careered off the road and smashed “straight through” her living room, neighbours say.

The pensioner was inside the semi in the cul-de-sac in Clevedon, North Somerset, when the crash happened at 8.30pm yesterday (Weds).

Neighbours were evacuated after fears a gas pipe may have been damaged.

Police arrested a man and a woman who were in the van, on Yeolands Drive, and held them in custody overnight.

So far no details about their ages, locations or what they are suspected of have been released.

Neighbour Paul Tree, 63, said: “We were sat in the front room watching TV, the wife and I, when a couple of emergency service vehicles went by, flashing.

“It was obvious something had happened.

“Then there was a whole convoy of flashing vehicles that rushed by and I opened the front door to see the street full of emergency services gathered.

“I walked around to see.

“People said that there was an elderly lady in the property. People said she was in her 90s. I don’t know her though.

“The van had gone straight through the property and they were bringing out the body. It was the lady’s living room. Her home is a semi.

“Walking around the area this morning people are stopping each other and talking about it. 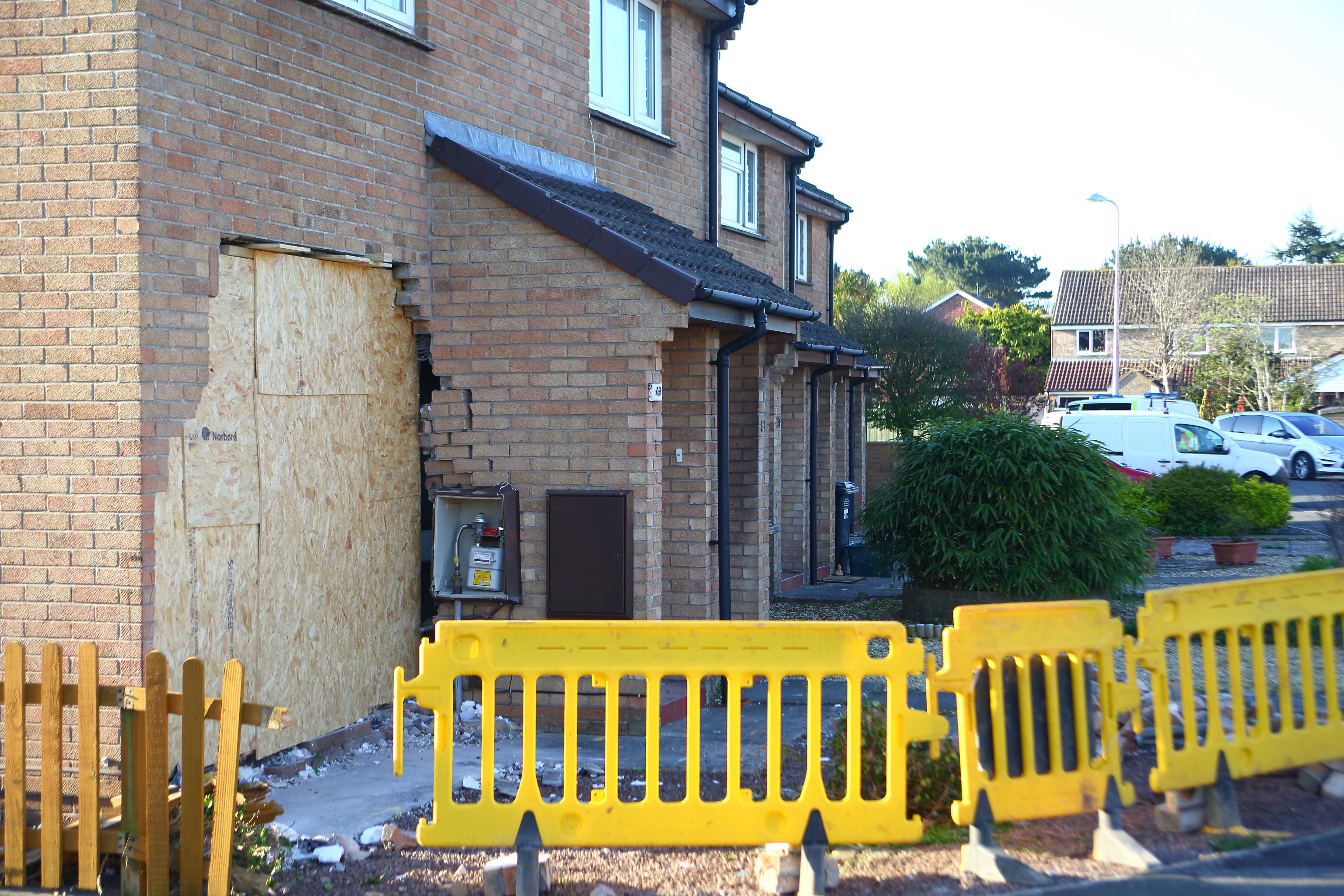 “It happened at 8.30pm. Just 100 yards away is a local school, and the kids were out playing ball in the road just an hour before.

“They pulled the van out. It was a white Transit-sized van. Forensics were there, doing what they do best.

“The driver was there and he was arrested.”

“A car had driven into a two storey building in Clevedon. Police attended along with South Western Ambulance Service.”

The great-granddaughter of a pensioner killed when a van smashed into her house was on the phone to her at the time, neighbours say.

Nearby residents ran to help the elderly woman after the white Transit van crashed into the living room of her semi-detached home – but say she died instantly beneath rubble,

Julie Elson, 57, who has lived four doors down from the woman for 37 years, said: “The old lady was on the phone to her great granddaughter at the time and she heard the bang and came down the road in her nightie because she lives in the area. She was hysterical, screaming.

“She heard the whole thing over the phone the poor girl. The old lady would always speak to you – a true neighbour

“Everything was manic last night My son has gone back to university but his car is normally parked outside – if it had been theres he might have survived – it might have stopped the van ramming in.

“Everybody is shocked – my eyes have been welling up this morning; I’m so sad. She was still very lively and hadn’t long given up driving.”

Neighbour Robert Cornock, 71, was one of the first men to enter the property. He said the elderly lady had lived there for more than 35 years.

Robert, a painter and decorator, said: “I was cutting the grass in backgarden and heard a terrific bang. I ran across and saw a white Transit van embedded in the wall of the house.

“Me and my neighbour went in – we called her name but couldn’t see her at all because she was buried underneath the rubble in the living room. She wouldn’t have known anything about it – it would have been so quick.

“We could smell gas right away so we had to get out quickly. Unfortunately, the van was parked against the gas meter, trapping it, so it had to be removed before the switch could be turned off.” 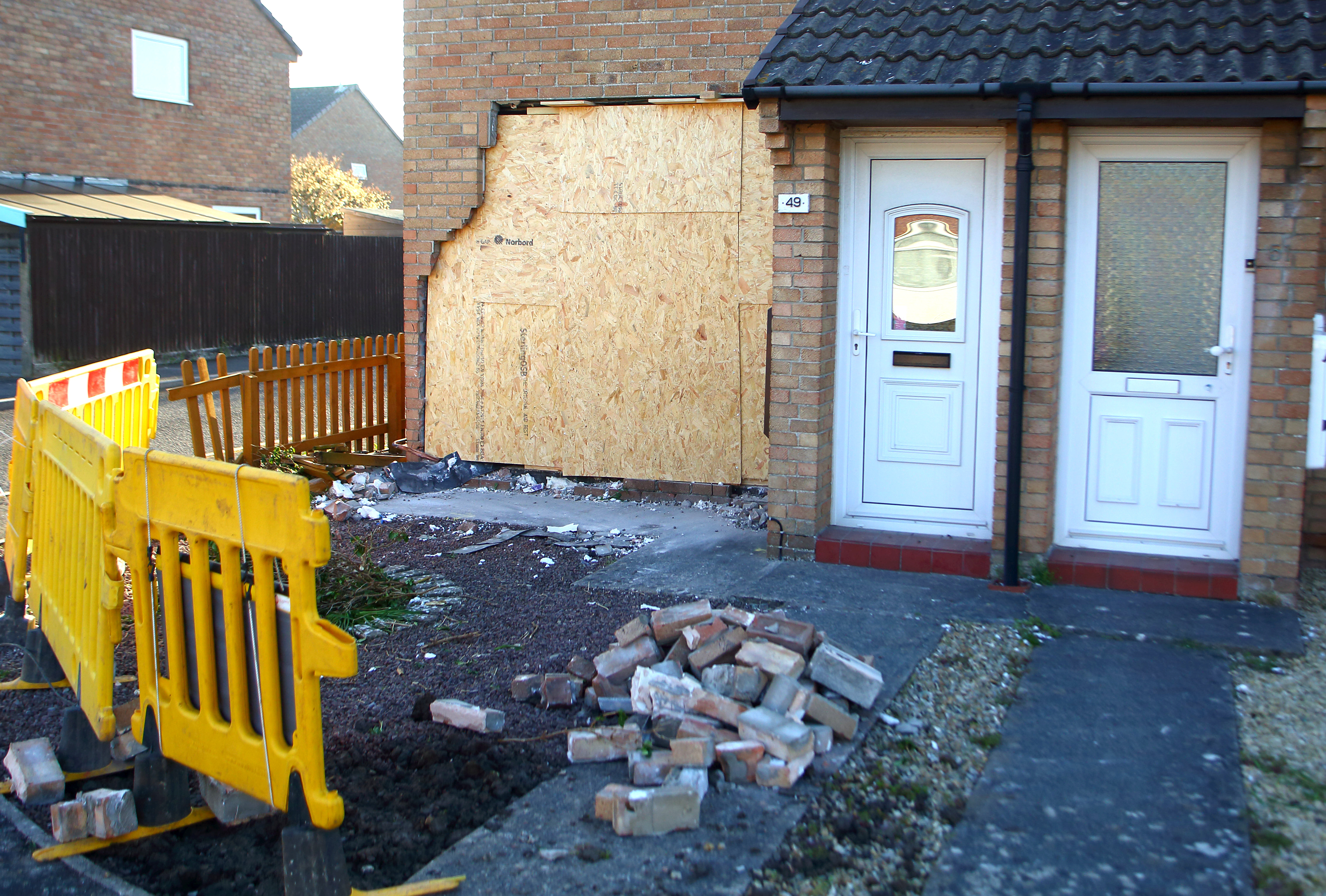 Robert, who lives on The Tynings – a road adjacent to the crash site Yeolands Drive – added: “She was a friend of mine – I’d decorate her house and have a cup of tea with her now and then. She used to have a husband who had dementia but he passed away nine or 10 years ago.

“She worked in a munitions factory in Coventry during WWII.”

The elderly woman’s next door neighbour, who asked to remain anonymous, said: “I opened the door to see what this loud crash was and a guy was screaming ‘Gas get out!’

“My daughter was asleep usptairs and I had to go up and drag her out of bed. I’ve had about one hour’s sleep.”

Paul Tree, 63, is a photographer who lives on the road. He said: “Me and my wife were sitting in the front room and there was flashing lights which turned out ot be a convoy of emergency services. I didn’t want to get too close out of respect.

“The community is in shock – I was walking my dog at 6am and saw many teary eyes and sad looks on people’s faces. Kids were playing in the street in that area just an hour before.”

Police say the van which crashed into the house had just left a pub.

”Tragically, a 90-year-old woman who was inside the property at the time died as a result of the incident.

”The woman’s family have been informed and are being supported by specially trained officers.

”Formal identification has not yet taken place.

”A 34-year-old woman and 33-year-old man have been arrested on suspicion of causing death by dangerous driving and remain in police custody.”

Inspector Frazer Davey added: “This was a terribly sad incident and our thoughts are with the woman’s family at this difficult time.

“While we’re in the early stages of our investigation we know the van involved, registration WR65 LNC, left the Crab Apple pub moments before colliding with the house.

“We have already reviewed some CCTV from the local area and as a result of this process we have identified a witness who we’d like to talk to.

“At about 8.25pm someone is seen talking to the occupants of the van outside the pub.

“I’m keen for this person to call us as soon possible as I believe they may have information which could help our inquiry.

“We’re also keen to speak to anyone who may have seen the van in the moments before the collision.

“The van is quite distinctive as it is white with a black bonnet and two white stripes. It also has ladders on the roof.”

Insp Davey added: “I’d also like to thank all the residents in neighbouring properties who were asked to leave their homes last night for their co-operation and support.

“A gas pipe was damaged in the collision and we had to make sure it was made safe before allowing people back in their homes.

“Being asked to leave your home late at night is clearly disruptive and I greatly appreciate their patience and understanding.”