Denise Chamberlain, a woman with a heart-shaped vitiligo patch on her face has told how she finally found the courage to go makeup-free after 30 YEARS of "wearing a mask"

A woman with a heart-shaped vitiligo patch on her face has told how she finally found the courage to go makeup-free after 30 YEARS of “wearing a mask”.

Denise Chamberlain, 42, was ten when a white spot appeared on her finger after the suspected autoimmune disease caused that area of her skin to lose pigment.

Over the years that followed, vitiligo patches spread to her hands and appeared on areas including her scalp, gums, arms, feet and legs.

Now the majority of her body is covered with white splotches, including her face which is adorned with a large marking in the shape of a heart.

Mum-of-three Denise’s striking appearance has resulted in strangers stopping her in the street to pay her compliments.

But for three decades – from the ages of around ten to 40 – she masked her face and hands with a “blanket” of foundation and concealer in a bid to hide her vitiligo.

She refused to leave the house bare-faced for fear of being stared at and was driven to the depths of depression, even considering suicide, because she hated her looks.

She finally decided to ditch her makeup around two years ago after washing it off to encourage a young girl with the condition to embrace herself.

Since going au natural she feels “happy and free” – and even started dating construction worker Robert McCoy, 35, eight months ago, who thinks she is “beautiful”.

Denise, of Anderson, Indiana, USA, said: “I started wearing make up in the fifth grade and I didn’t stop wearing it on my face until I was 40.

“I wore it every single day and I learnt how to perfect it so people who looked at me wouldn’t even know I had it on.

“I stopped wearing it on my hands when I was 24 and if people saw it, sometimes they wouldn’t want to touch me.

“It made me into a person who didn’t want to be noticed. That mask was everything for me.

“Vitiligo clenched me for so long and didn’t let me prosper. Now I’ve ditched my makeup I feel like a completely new person.”

Denise first tried to go makeup-free around five years ago on a trip to Walmart but suffered a panic attack because she felt “exposed” and like “everyone was staring”.

The next time she tried was two years ago, after a young girl who she chatted to as part of a vitiligo support group told her she struggling with the condition.

Ever since, she has gone makeup-free. 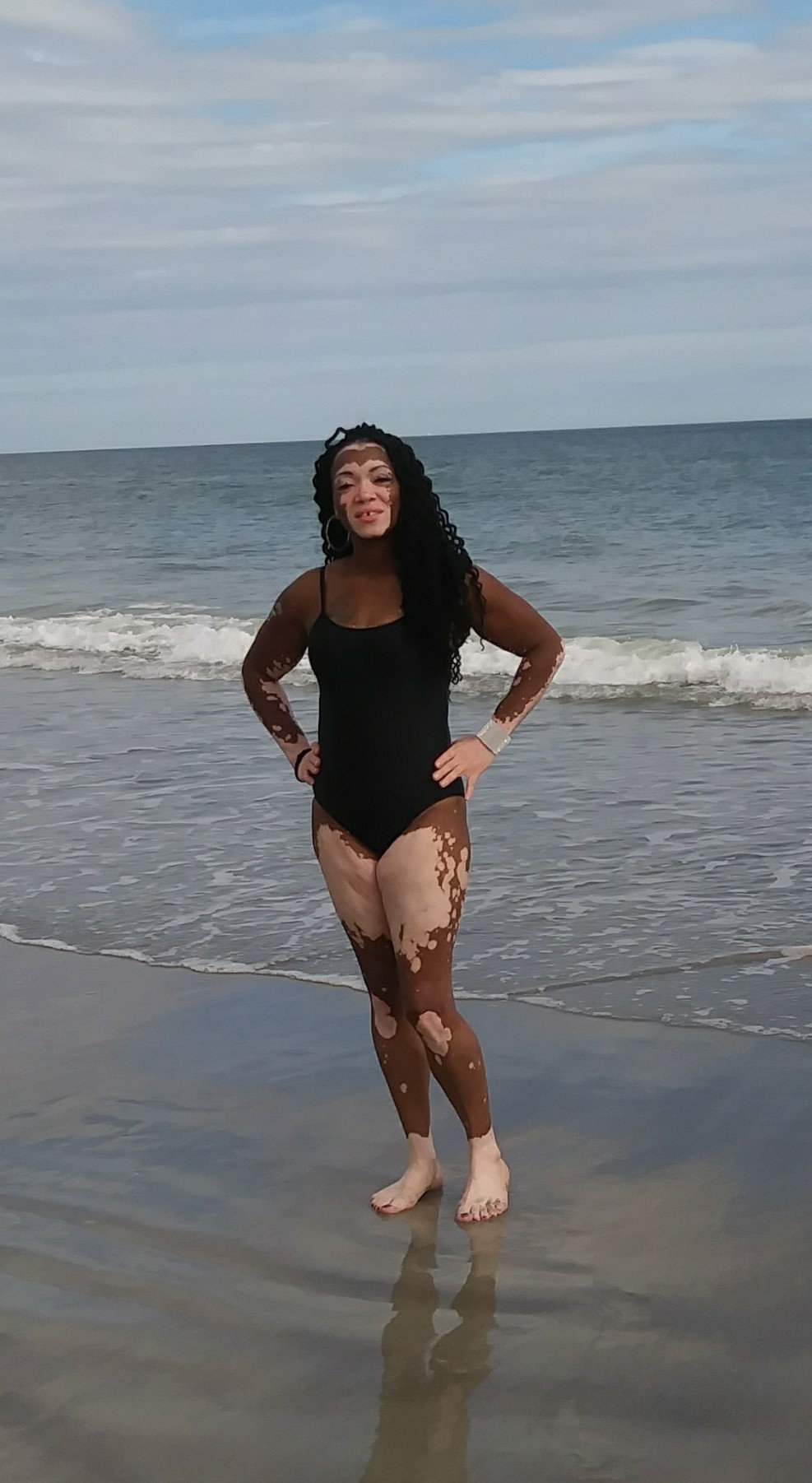 Denise, who is mum to Dominique Wright, 24, Khalil Chamberlain, 19, and Kennedy Chamberlain, 13, and has one grandson, said: “Vitiligo really messed me up.

“As a child, I remember I was at our community pool complex and I got up on the diving board and the guy behind me was like, ‘What is wrong with your feet?’

“I could run well and I should have got a scholarship but with my makeup and being in the heat, I was worried it was going to come off and people would see my skin.

“When I had my first son I was really struggling still. 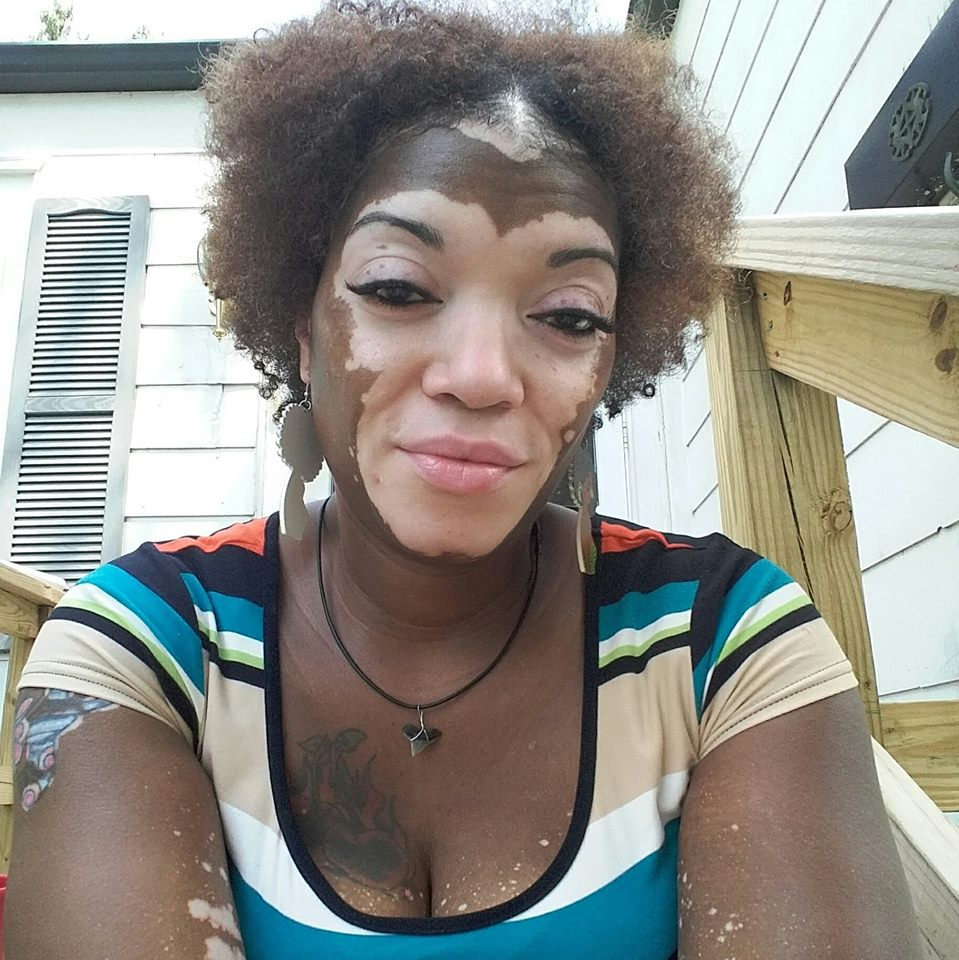 “I wouldn’t go to teacher conferences or sporting events, which hurt me so bad. I would tell him I was sorry and he would see me cry.

“Every day I looked at my face and I would see it growing and growing. It made me suicidal.

“Two years ago, I was watching how quickly I was getting through makeup and I thought, ‘I have to learn how to love myself’.

“Then in our support group a little girl was having issues and it was really affecting her.

“I went and washed my makeup off. I was already at the door knocking because I wanted to come out, but that girl pushed me out of the door.

“Now that I’m not wearing makeup anymore, I feel free.

“I can’t tell you how many people have come up to me and said about the heart on my face – the reaction I have got has been amazing. 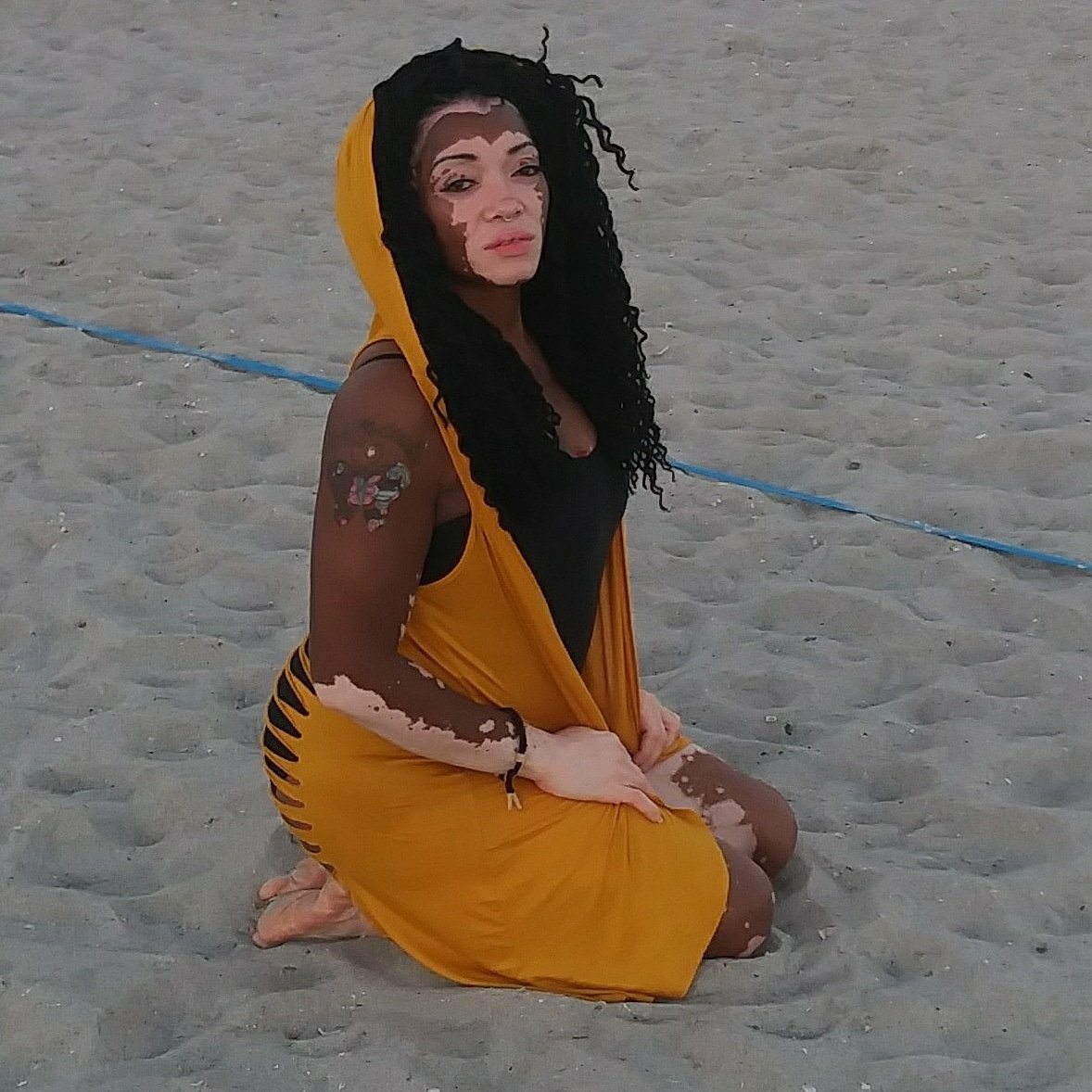 “I feel like God has given me a second chance at life.”

Denise is one of 100 women starring in Underneath We Are Women, a new project curated by Amy Herrmann which aims to celebrate diversity in a photobook.

She said: “Denise speaks with so much passion about vitiligo and her experiences in living with it.

“She has the most wonderfully contagious energy about her.

“Denise is doing some wonderful things to raise awareness for people living with vitiligo – number one being embracing herself.”