A woman who looked pregnant after piling on weight while on a diet went to the doctors – who discovered FOOT-WIDE ovarian cyst.

Sarah Upton, 29, could not understand why she was gaining weight and cut out milk and bread amid fears she had an intolerance.

But after noticing a ‘baby bump’ during a gym session she went to see her GP and was admitted to hospital.

The cyst then burst and she underwent a three-hour operation to remove the 27cm-wide growth – weighing a stone and a half.

Sarah, an estate agency manager from Derby, now has a huge scar from her belly button to her bladder.

Describing how she discovered the growth, she said: “Every Thursday I go to a gym class and lift weights.

“During the class, you are surrounded by mirrors and I thought I looked pregnant but hoped nobody noticed it.

“My stomach had swelled up to such an unusual size.

“Afterwards I spoke to the instructor and he said ‘I have to ask you something. Either you are going to be offended or it is true – Are you pregnant?’

“That was when I decided to go to the doctor and learned I had a cyst on my ovary that was 27cm wide.

“I thought I had put on a bit of weight with age but began to worry when it kept growing.

“I had to start wearing baggy clothes because I couldn’t fit into my outfits.” 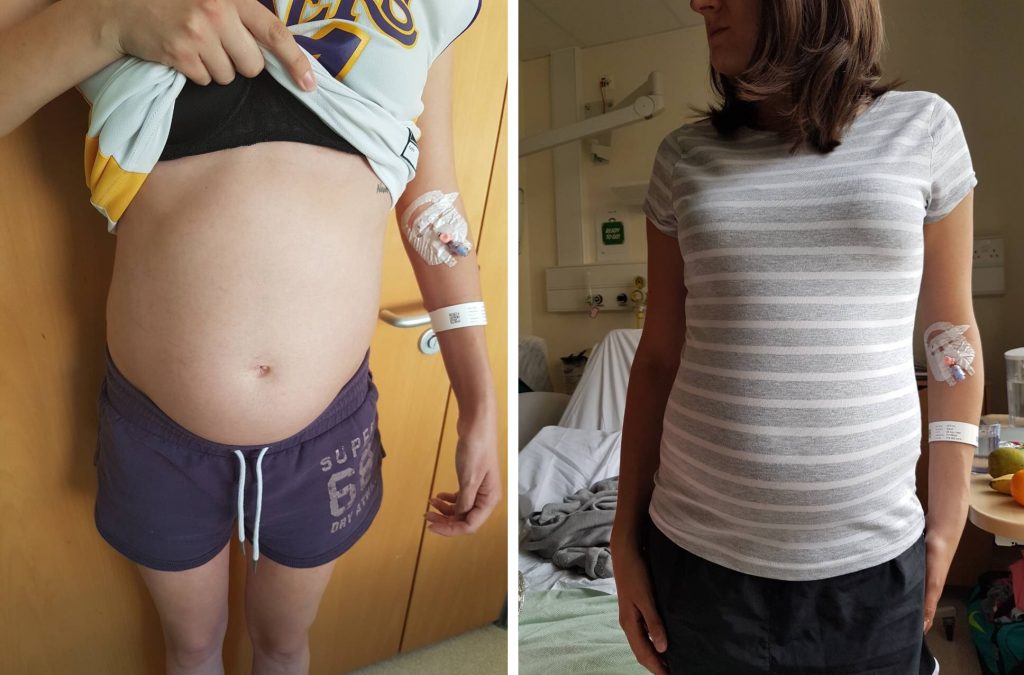 Sarah was admitted to hospital in August and put on a drip after the cyst ruptured.

It marked the end of the gruelling five-month period which included being unable to digest food in the days before her operation.

Sarah and partner Daisy Pridden, 21, became increasingly confused by her stomach’s growth despite the amount of exercise she was doing.

After her gym instructor asked if she was pregnant, Sarah was even asked to do a pregnancy test by doctors.

Super-fit Sarah usually went to the gym three times a week and had a healthy appetite – but she became embarrassed, stopped training and started to throw up after every meal.

She added: “They wanted to monitor me closely and by this time I was experiencing a lot of pain in my left side and was being sick after every meal.

“I had a really healthy appetite before hand I’d always be hungry and I loved food. I ate really well and ate large meals in the evening.

“I knew whatever I had was really affecting my appetite. Before I’d found out I had the cyst I began to lose my appetite.

“When I thought I had IBS my appetite wasn’t as good – I wasn’t feeling hungry but was eating anyway and was never able to finish meals.

“In the five days leading up to surgery I wasn’t able to eat anything without being sick.

“My stomach felt really tight because it was so big and there was so much pressure.

“After it was removed, doctors told me they couldn’t weigh it because it had ruptured and this was contributing to the pain.

“Doctors said I would struggle to have children without the left ovary but I won’t be having children anyway.

“I’m very relieved the ordeal is over.”

Get your tips out: Bikini baristas cause a stir