11-year-old Mule Wallace the Great with his rider Christie Mclean.

A horse rider has slammed British Dressage officials for refusing her application to compete – riding her talented MULE.

Christie Mclean, 31, has been riding her big-eared equine, Wallace The Great, for just over a year and has already competed him in several unaffiliated competitions.

The mule was found abandoned in Ireland wandering around a village but rescued and brought to England and trained into a dressage star.

Christie says the mule is “incredibly intelligent” and “good as gold”, and has already scored as high as 70 per cent in unaffiliated intro-level tests.

But Christie was left baffled when she applied for British Dressage club membership for Wallace The Great to compete at official intro-level.

She was told that only ponies and horses may be affiliated.

Christie, a yard manager from Stroud, Glos., said: “They just said no, and I really want a valid reason why.

“I only wanted to compete at club level, which is just walking and trotting. It’s the very lowest level of British Dressage. I didn’t expect to be turned away so quickly.

“Their exact phrasing is ‘All ponies and horses must be registered to affiliate’.

“I was told that other horses may not take to him being there – but I’ve never had a problem. Most other horses just second-look him and are fine.

“He’s so intelligent it’s incredible. He’s got a sharper brain than my own competition horse. It’s just a shame – he could turn out to be the most amazing little diva.”

And Christie added that, at 14 hands high, riding the 11-year-old mule is “exactly the same” as riding a horse.

She said: “He’s very sweet and laid-back, and he never brays when we’re out. He just looks like a nice New Forest pony – the only difference is his ears are pretty enormous.”

Christie rides Wallace The Great, who belongs to her friend Lesley Radcliffe, twice a week.

But she added: “He was so bad for eating all the flowers in people’s gardens, they started feeding him hay in a bus stop.”

Wallace The Great was taken in by a charity and brought to England to live with the Donkey Sanctuary, where Lesley took him on and wanted him to have a job.

Christie said: “She asked if I’d compete him. I thought it would be fun and a bit different.

“I’d never ridden a mule before, but I’ve been riding horses since I was a kid, and it’s really no different.

“He works in a beautiful outline, he’s very consistent with his paces. He’s just a bit unbalanced in canter.” 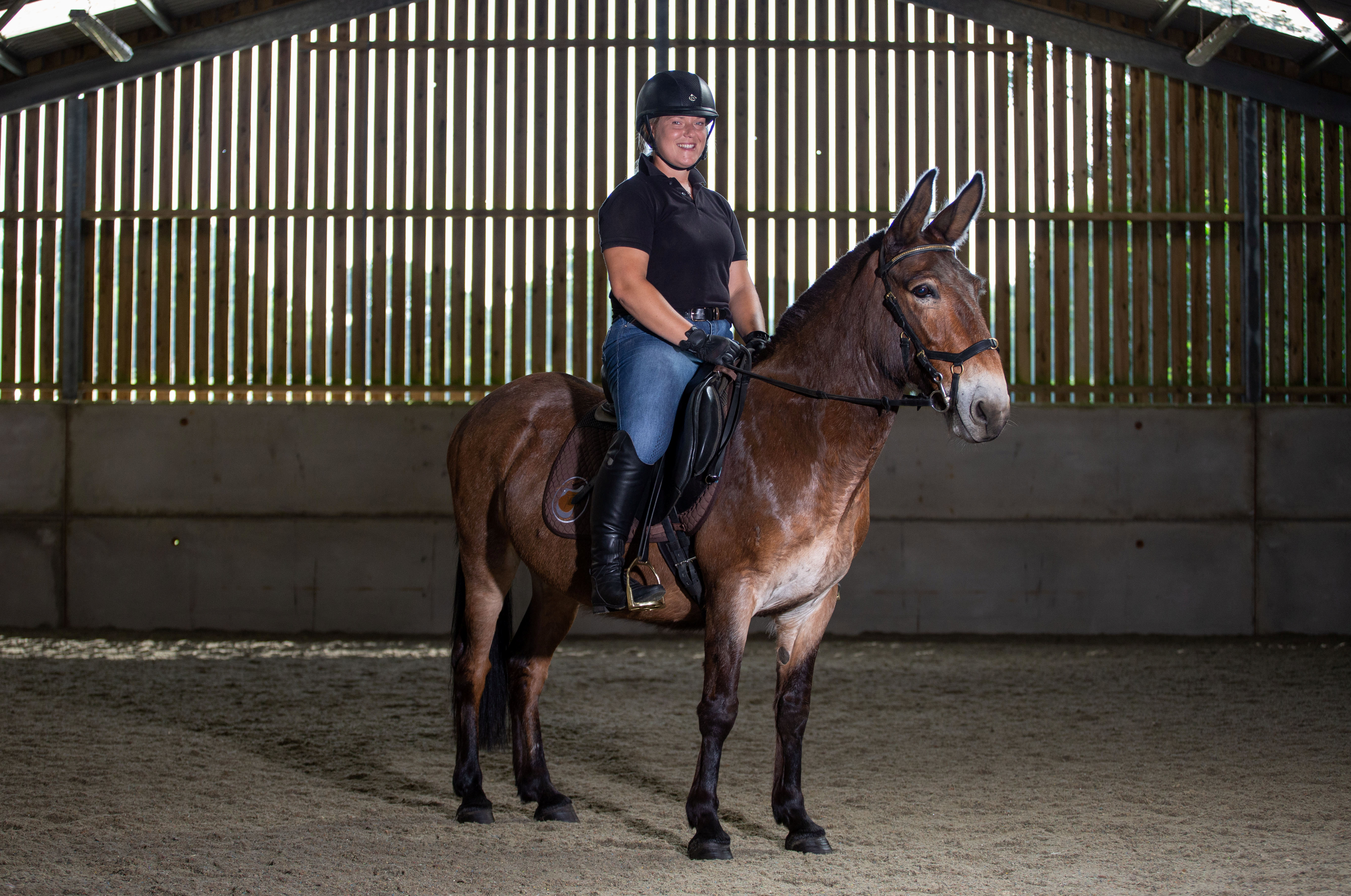 Christie said British Dressage told her that the Donkey Sanctuary would be able to help advise her on competitions she could enter with Wallace.

But she was told that she would have to ask venues before she went whether she could take him.

She added: “Is it really a problem? I don’t think British Dressage would be bombarded with mule applications if they let us in.

“We’re not going to offend anyone or hurt anyone, and there’s a good chance we won’t be around any high-level dressage horses who might be upset by him, as they won’t be at the intro tests.”

She says she has also approached British Olympic dressage gold medallist Charlotte Dujardin to see if she might have an input.

And she added that she is willing to take her complaint to the Federation Equestre Internationale (FEI), who control Europe’s equestrian movement, and who British Dressage answer to.

“But our rule book refers specifically to only horses and ponies within our affiliated competition criteria.

“We take our lead from the FEI which also doesn’t permit mules under its rules.

“We really hope they can continue their competition career in the shows offered by the British Mule Society and the network of venues which run unaffiliated dressage and wish them the best of luck.”