A woman bought and moved into the church where generations of her family got married – and then tied the knot there herself.

Amanda McFarlane, 55, wed husband Sandy, 63, in the same building where her mother, aunt, grandmother and great-great-grandmother all walked down the aisle.

Their home ‘Church House’ was once a church where several of her ancestors got hitched but was converted into a dwelling in the 1980s.

Amanda and Sandy bought the Grade C-listed house in 2004 and and quickly carried on the family tradition of holding weddings there when they wed three years later.

And Sandy’s son Rennie McFarlane, 33, continued the tradition when he wed wife Kelly, 35, in the family home in 2013.

Amanda said: “I knew Mum and Dad had been married in the church but I hadn’t realised how many family connections there were.

“My grandmother, great-great-grandmother, aunt and great-aunt all got married there. On our order of service, we listed all the previous marriages in my family.

“It was an obvious decision to marry there.

“I’d been familiar with the wedding pictures, and we recreated the pictures in the same place in the church, so you can see how it has changed, and how it hasn’t changed, through the ages.

In 1959, Amanda’s mother Moyra Smith had walked down the aisle in what was then a church, to exchange vows with Amanda’s father, Scott Blyth.

And grandmother Betsy Robertson Scott wed her husband William Clark Blyth there in 1927.

So it was a special day for Amanda’s elderly parents when they watched her walk down the aisle. dressed in an ivory gown on June 28, 2007.

Built in 1843, it was one of three churches in the Bow of Fife, near Cupar, Fife, and was mostly used for weddings.

Amanda and Sandy bought the Grade C-listed house in 2004 and quickly carried on the family tradition of holding weddings there when they wed three years later.

With her children Lucy, 21, and Rory, 28, living away from home, and Sandy’s retirement looming, the couple decided to sell up and downsize.

They put the five-bedroom house on the market for £650,000 and decided to build a new home in St Andrews, Fife, where Sandy, a GP, can play golf.

Amanda said: “The one thing for us with selling it is that I won’t get to see my own daughter or son get married there.

“We are sad about moving but it is only the two of us. It’s a lovely house but it needs people in it.

“I did wonder whether whoever buys it would let us come back and have another wedding.

“It would be nice to carry on the family tradition.” 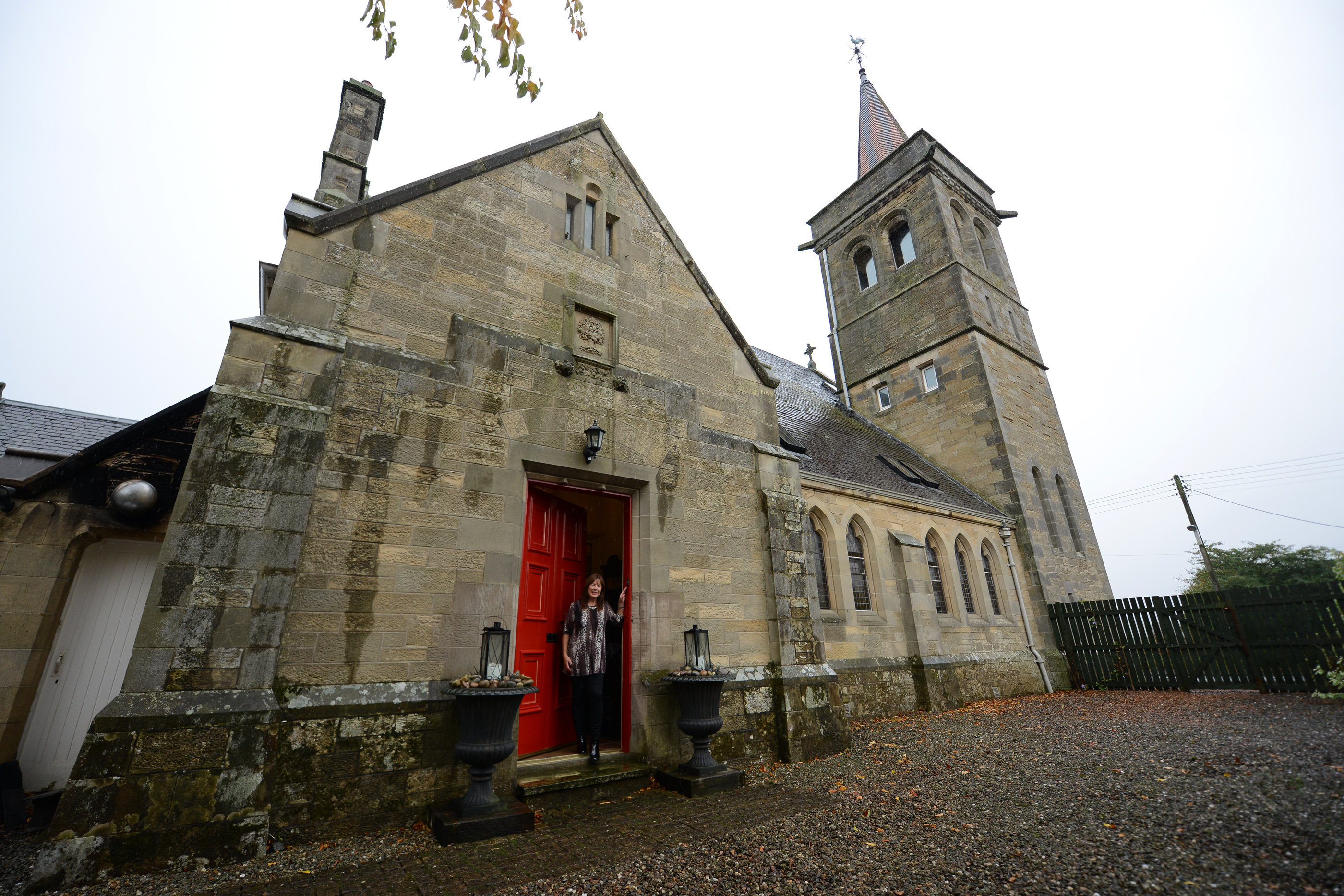 As a young boy her father Scott, who now has Alzheimer’s’, would go to Sunday School in the vestry – which is now his daughter’s front room.

Amanda said it was “love at first sight” when she first visited the house.

She added: “There were three churches in the area and this is where weddings were held.

“It has got a lovely feel about it – it has definitely got a very happy and peaceful vibe.

“I think that everyone who has stayed here has noticed it, it has got a comforting feel.

“I’d like to think it’s from all the blessings and marriages.”

After buying Church House, Amanda and Sandy stayed in a small cottage in nearby Ceres, Fife, while they overhauled it and drastically changed the design.

They knocked two bedrooms into one larger one, with an en-suite bathroom and dressing room.

And the couple took care to preserve the original features of the building, including the carved pillars which Amanda says are of a quality close to those of the Rosslyn Chapel, which inspired Dan Brown’s Da Vinci Code series.

The stone arches inside the building, and on the original windows, are a visual reminder of its former use – and one wooden pew was preserved by the family.

Amanda said: “We are really pleased with the bedroom – when we first bought it there were two bedrooms upstairs but we felt they weren’t grand enough for the house.

“It is a lovely space with lots of light – I just don’t know how we are going to replace it.

“The stained glass windows on one side of the living room are quite beautiful. They are not overly religious.

“On the upstairs left hand side we’ve got stained glass which is yellow and gold, and when the sun comes through it is just beautiful.

“There is no graveyard, so no unrested souls.”

The couple has enjoyed spending time in the belfry, which has panoramic views of the surrounding landscape, relaxing with a glass of wine in the evening.

The house also has two sitting rooms and a kitchen which overlooks the garden. 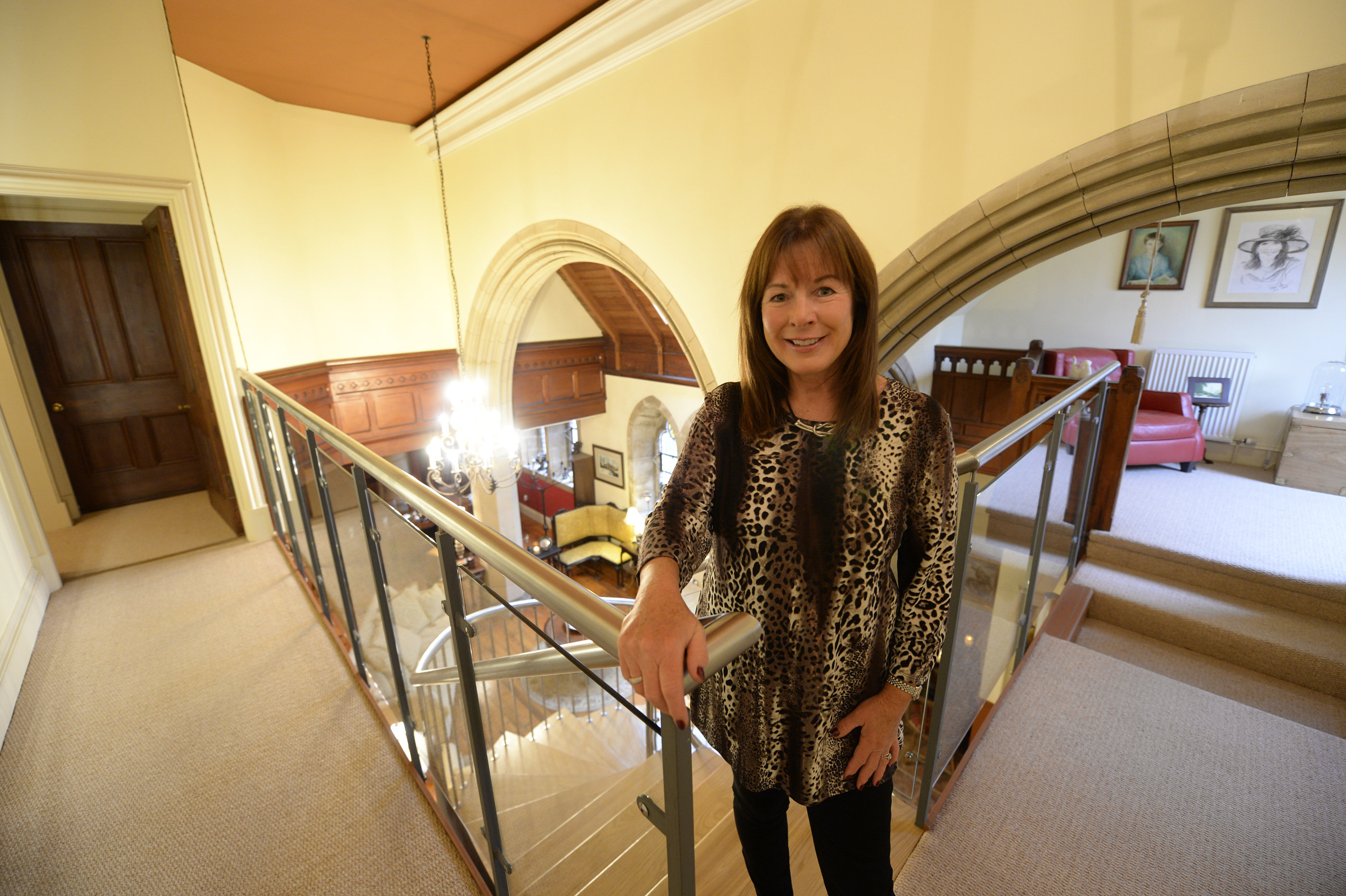 Amanda said: “It has got lovely features, some of the carvings on the pillars are beautiful.

“Practically, the only things which are listed are two stone fireplaces and wood panelling.

“I don’t know what happened to the altar.

“We’ve got an original pew which was left.

“I found a font which was from another church, and an old Bible and some chairs, which blend in.

“When we got married, we stood at a stained glass window with a Church of Scotland minister and the chairs were arranged to create an aisle space.

“People watched from the spiral staircase, there were 80 guests and then we went to a hotel for the reception afterwards.

“I think my mum is sad we are selling it because she loves it so much.”

Gardener granddad threatened with arrest - for cutting back trees and weeds