A loving pooch rescued from the streets after her owner became homeless has found bundles of love with a new family including her two guinea pig sisters.

A loving pooch rescued from the streets after her owner became homeless has found bundles of love with a new family including her two guinea pig sisters.

Moki, a two-year-old pit bull mix, loves nothing more than chilling out with Frida and Pandora and spends her evenings cuddling up to her unlikely fluffy friends.

Pet lover Kristy Gamayo, 44, adopted Moki from Animal Care and Control in San Francisco, USA, after her original owner became homeless and could no longer care for her.

When Kristy brought Moki home she was worried that the pitbull might scare her guinea pigs Frida and Pandora or even try to bite them.

But luckily the trio were instant pals, curiously sniffing each other through their cage while Kristy supervised them.

Now Moki cuddles with Frida and Pandora for a half an hour every evening and even grooms his fluffy roommates before bed.

Kristy said: “When I walked through the shelter, I didn’t feel a connection with any of the dogs, but in the very last one I saw Moki.

“She wasn’t barking or growling and she looked so sad. I decided I had to have her.

“I was anxious about getting pit bulls because when I was younger I knew people who used to fight them. I had a bias against them.

“But the shelter staff assured me Moki was the sweetest. She wouldn’t hurt anyone. They were worried about Pandora and Frida though.

“They thought she might kill them and they weren’t going to let me adopt Moki.

“But they came to inspect my home and I promised I would keep the guinea pigs safe.

“When I finally brought Moki home they were all super curious about each other.

“I cautiously let Moki sniff the cage and the guinea pigs would peek out at her.

“They loved sniffing each other and rubbing one another’s noses.

“One day I brought Frida out onto my lap and Moki was sniffing her and licking her. 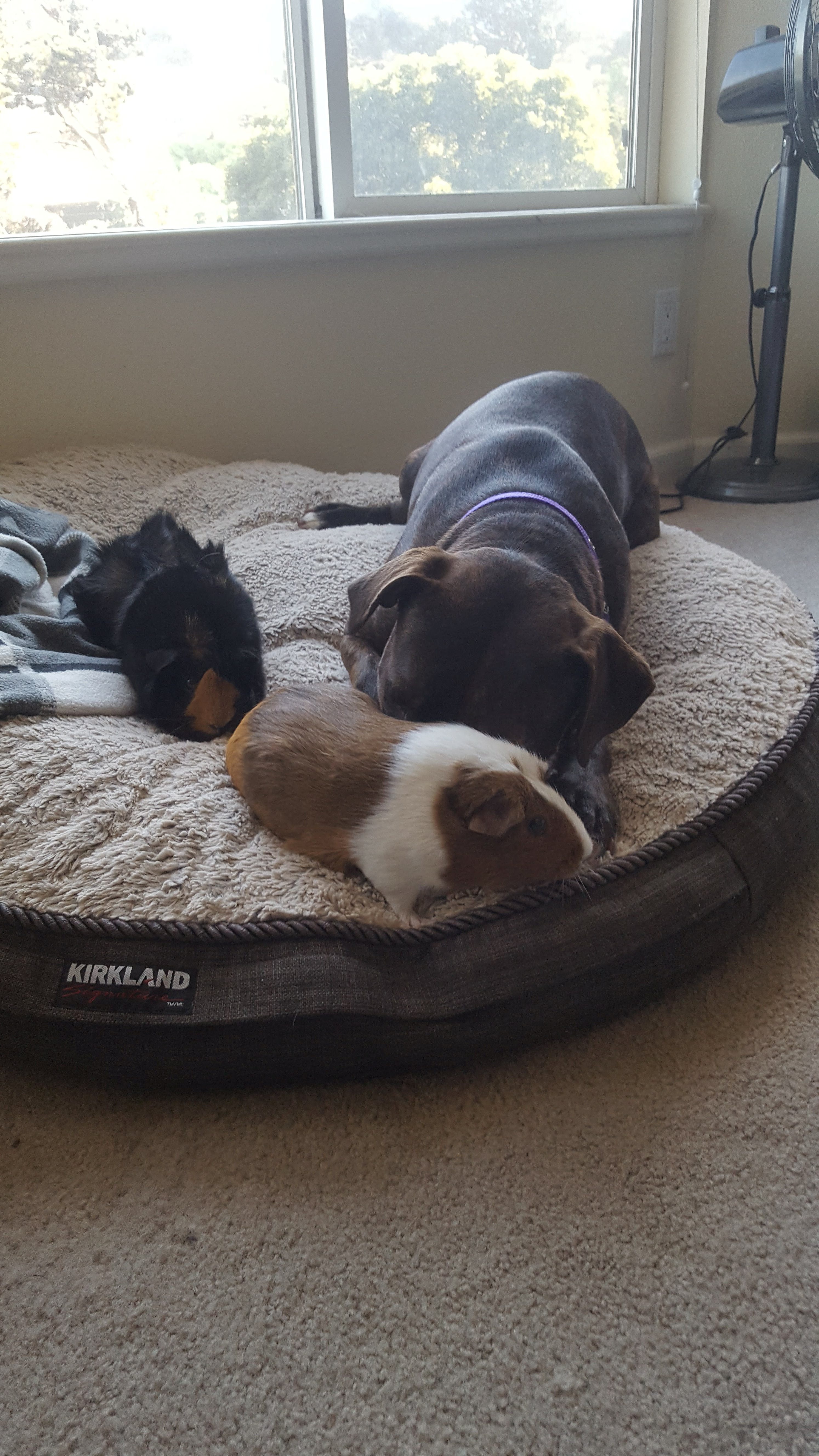 “I did that slowly for a couple of months, just bringing the guinea pigs out and letting Moki sniff them on my lap. Now they’re the best of friends.

“When Frida and Pandora have their floor time for about half an hour every day they all love to hang out.

“Moki loves to clean them, and they sit there loving it. They are such a good team and they’re so cute together.”

Kristy began sharing videos of her pets on her Instagram page and said while most of her followers love her updates, some were less positive.

“When I started sharing the videos of them on Instagram, I got so much so much abuse.

“People were calling me a terrible pet mom and sending me really vicious private messages. It made me think about closing the account.

“But there are so many people who love the videos and I know and Frida and Pandora are safe.”

Kristy said she seeks comfort and support from her pets, who cheer her up even on bad days.

“If I have a difficult day at work, I like to come home and lay with Moki and pet her, or just hold Frida and Pandora on my lap and pet them.

“I like to give them kisses and talk to them. They really relax me and always make me laugh and smile.”