Two kayakers capture the moment they run into thousands of jellyfish

This incredible video shows the moment two kayakers ran into a swarm of thousands of jellyfish.

This incredible video shows the moment two kayakers ran into a swarm of thousands of jellyfish.

Jazz Seary, 28, and her husband Julian, 29, were enjoying a trip out on the water after work when they made the stunning discovery.

They described the experience was mesmerising and that there were countless jellyfish in each and every direction.

The pair, from Illogan, Cornwall, luckily had a GoPro with them and managed to capture the sighting just of

Jazz, 28, a teaching assistant, said: “We were out for about an hour-and-a-half in the end because it was so amazing out there. 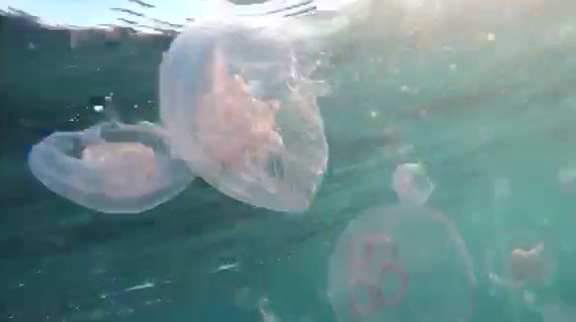 “We had been meaning to go around Gull Rock for a while so that’s what we did.

“We went further than we planned and then saw all their jellyfish a bit further out, they weren’t near the swimming area.

“They were so beautiful. Luckily we have a new GoPro with an extendable handle so I was able to stick in because I wanted to get a better look.”