A ”troubled” teenage girl who was discovered dead along with her father at their family home had spent time in a drug rehabilitation hostel after being thrown out, it was revealed today.

Margaret Pierides, 16, was airlifted to hospital after being discovered with serious injuries at her family home but did not survive.

Her father, successful businessman Costas Pierides, 48, had been pronounced dead at the family’s £750,000 house in the picturesque village of Sible Hedingham, Essex.

Friends yesterday revealed how Margaret had briefly moved into the Foyer hostel in Braintree, Essex, after being thrown out by her parents for using drugs.

She moved back in ”a few months ago” but had held a party at the family home on Friday night which led to a confrontation in the morning.

A friend also revealed that Margaret had changed her Facebook status to ‘My dad thinks I’m a very special girl’ some time before they were discovered, leading to local speculation that she had killed her father.

A friend, who did wish to be named, said: ”Margaret was a misunderstood girl, I can’t imagine what she must have been going though. She was so pretty but there was a lot going on underneath the surface.

”She got into drugs and alcohol and social services got involved. She ended up in The Foyer at 16 with no one to help her. The place is known around here as a drugs den.

”Her parents took her back a couple of months ago and she moved back home with them.

”On Friday she had a party with some of her friends and the next morning things must have blown up with her and her dad.

”What people are saying is that she killed him and then changed her Facebook status to ‘My dad thinks I’m a very special girl’ before killing herself.

”She was a very troubled girl and no-one really knows what was going on with her father. There were rumours of physical abuse.

”In the end, no-one knows what happened there except her and her dad – and they?re both dead.”

The Braintree Foyer has 32 beds in 9 flats with shared facilities to accommodate young people in need of housing between 16 and 25.

Residents live on the condition of a seven to 28 day contract and must sign up to a development plan during their stay.

Another friend, whose daughter had also stayed at the Foyer, confirmed that Margaret had spent time there – but said that the reason was because Costas Pierides had been hitting Margaret.

She said: ”My daughter knows her and saw her there at the Foyer. She was staying there to escape her father because he used to beat her.

”It’s a terrible business. She was a beautiful young girl. You can’t believe it could come to this.”

Staff at the Foyer today refused to confirm whether Margaret had been a resident.

At the local St Peter’s church yesterday Reverend Laurie Bond, Priest in charge of Sible and Castle Hedingham, led prayers in memory of Margaret and Costas at a 10am service. 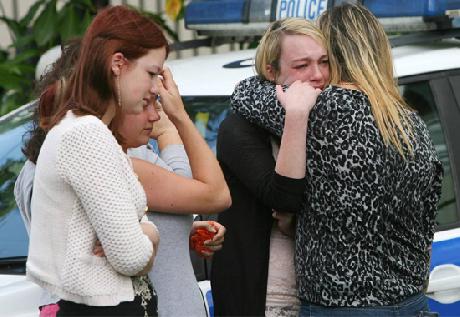 Speaking after the service, he said: ”Just last week I was having lunch with Bernadette and Costas after they acted as godparents at a christening.

”Margaret was there too, and although she had to leave early, there seemed to be no animosity and nothing amiss.

”Our prayers are with the whole family at this difficult time.”

Floral tributes were laid outside the gates of the house near a police car which remained in the driveway throughout the day.

Another said: ”You will be missed. Made everyone laugh. Rest in Peace. You will never be forgotten.”

A post mortem was yesterday carried out to establish the Costas and Margaret’s causes of the death which police said did not involve guns.

Evil horseman from Lord of the Rings captured on camera