This is the heartwarming moment a toddler who has spent her whole life in hospital was allowed to go home for the first time after a lifesaving double lung transplant.

Mae Vogel-Koslow, two, was diagnosed with pediatric interstitial lung disease four weeks after she was born in February 2016.

The tot was born without the gene ABCH3, which is responsible for making the protein that lines the lungs.

As a result she struggled to breathe by herself and spent the first 20 months of her life on life support in hospital after undergoing surgery to have a trach fitted at six weeks.

Her parents Courtney Koslow, 41, and Maura Vogel, 45, originally placed her on the list for a double lung transplant when she was three months old but decided to wait to see if her condition improved.

But by August 2017 Mae’s health had deteriorated drastically and the mums decided a transplant was the only way to improve their daughter’s life.

Just 30 days after reactivating Mae’s spot on the transplant list, the toddler underwent a double lung transplant at Boston Children’s Hospital on September 16.

Three weeks after surgery, a vent-free Mae walked out the front doors of the hospital for the first time with her parents and big sister Rosie, four, in a moment that was captured on camera.

Courtney, an affordable housing developer, said: “It was magical to see this thriving little person be so free for the first time in her life.

“When they told us she could come home it felt unreal.

“When we were leaving and Mae walked through that door she hesitated.

“You could tell she was thinking ‘This is weird’.

“She had never come through that door on her own before, she had always been on a stretcher with EMTs or doctors.

“That moment was so exhilarating for us.” 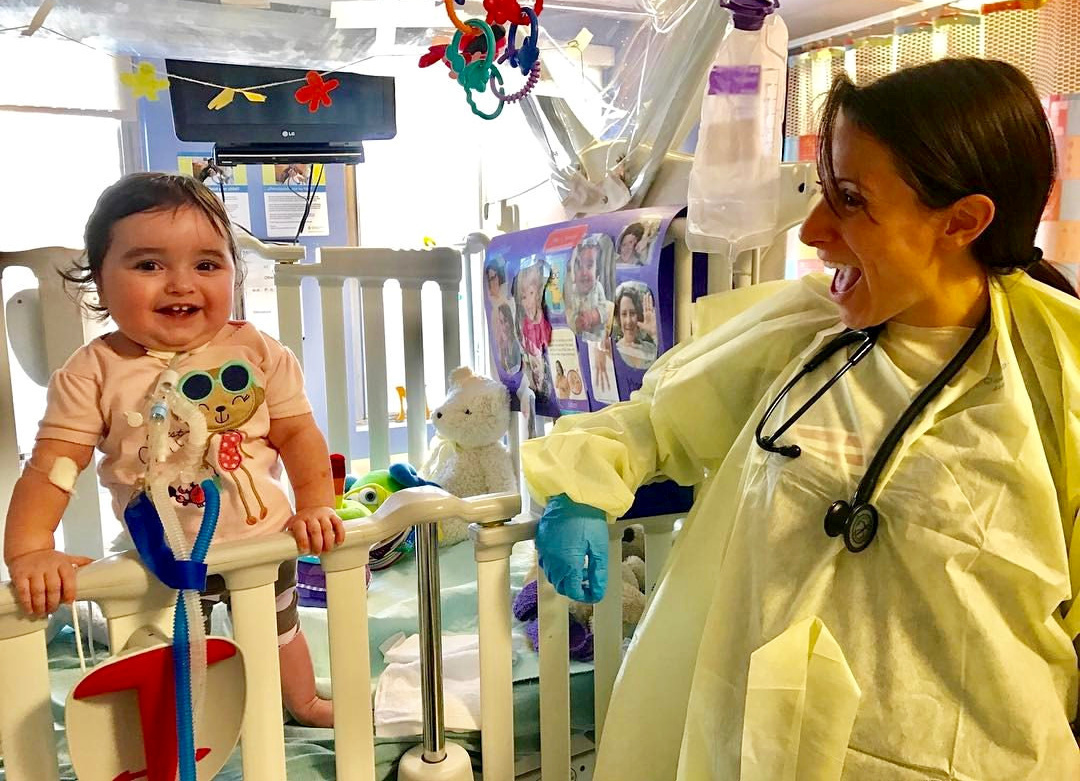 Before her transplant, Mae was unable to walk independently and could not talk because of her trach but her parents say there’s no stopping her now.

Mom Maura, an associate director, said it was a special moment to see her daughter swim in the ocean for the first time last week while on a family holiday to North Carolina.

“Mae loves being outside. Any chance she gets she’s out there running around.

“We think that her first 20 months spent in hospital has something to do with it.

“We went to North Carolina to visit my parents last week and Mae wouldn’t come out of the ocean.

“There was just no getting her out of the water.

“Last year that she was a baby in a hospital crib hooked up to a vent and now she’s swimming in the ocean.”

Courtney added: “She’s so spunky and she has a lot of opinions.

“She loves dogs even though we don’t have one. She loves looking at pictures of them. She’s really, really social and great at making friends.

“Every moment with her is so special to us.

“We absolutely made the right choice deciding to go the transplant route.

“The quality of life that she now proves that.”

Courtney and Maura say the family of Mae’s generous organ donor is never far from their minds.

Maura said: “We plan on writing the donor family a letter, which they have access to should they ever want to.

“The gift they’ve given Mae and our family is so special but on the other side of transplant there is a sadness there because someone has lost a child.

“We’re aware of that every day.”