An orphaned bear cub is in recovery after being rescued from a cliff where it had sadly been trying to suckle and cuddle its dead mother for more than 48 hours.

The black bear was first spotted by the operators of a local boat tour, who noticed that the cub was laying on top of its mom who appeared not to be moving.

John Forde, 54, who runs Tofino Whale Rescue Center, was alerted to the tragic situation and immediately boarded a boat to Ross Pass, British Columbia, with his wife Jennifer Stevens to access the situation.

Upon arriving at the cliff, John came across the body of the female bear who had died from natural causes and quickly found her cub hiding beneath bushes.

But when he tried to capture the cub, it became scared and began to climb a high tree, where John could not reach it.

The animal rescuers made the difficult decision to leave the cub alone for the evening as it was getting dark, but worried that circling eagles might nab it at nightfall.

The couple returned to the cliff at 5.30am the next morning and were relieved to discover the cub alive, once again cuddling up to his mom.

This time, animal expert John slowly approached the orphaned cub who let him pick it up but became it distressed upon realizing it was leaving its mother.

In Tofino, the severely malnourished cub, who weighed just four pounds, was admitted to North Island Recovery Center, where it is hoped it will make a full recovery.

John said: “We got a call on May 25 from a boat tour guide who noticed that a bear cub was hanging around a female who appeared to be dead.

“We immediately hopped into a boat to Ross Pass, where we spotted the female pretty quickly, but there was no sign of the cub.

“I got off the boat and began to look around when I spotted it hiding in the bushes.

“I tried to catch it but I spooked the cub and it ran about 60ft up into a tree.

“I got back into the boat and waited to see if it would come down but it didn’t.

“We made a tough decision to leave the cub overnight which made me very wary because I could see eagles circling around. 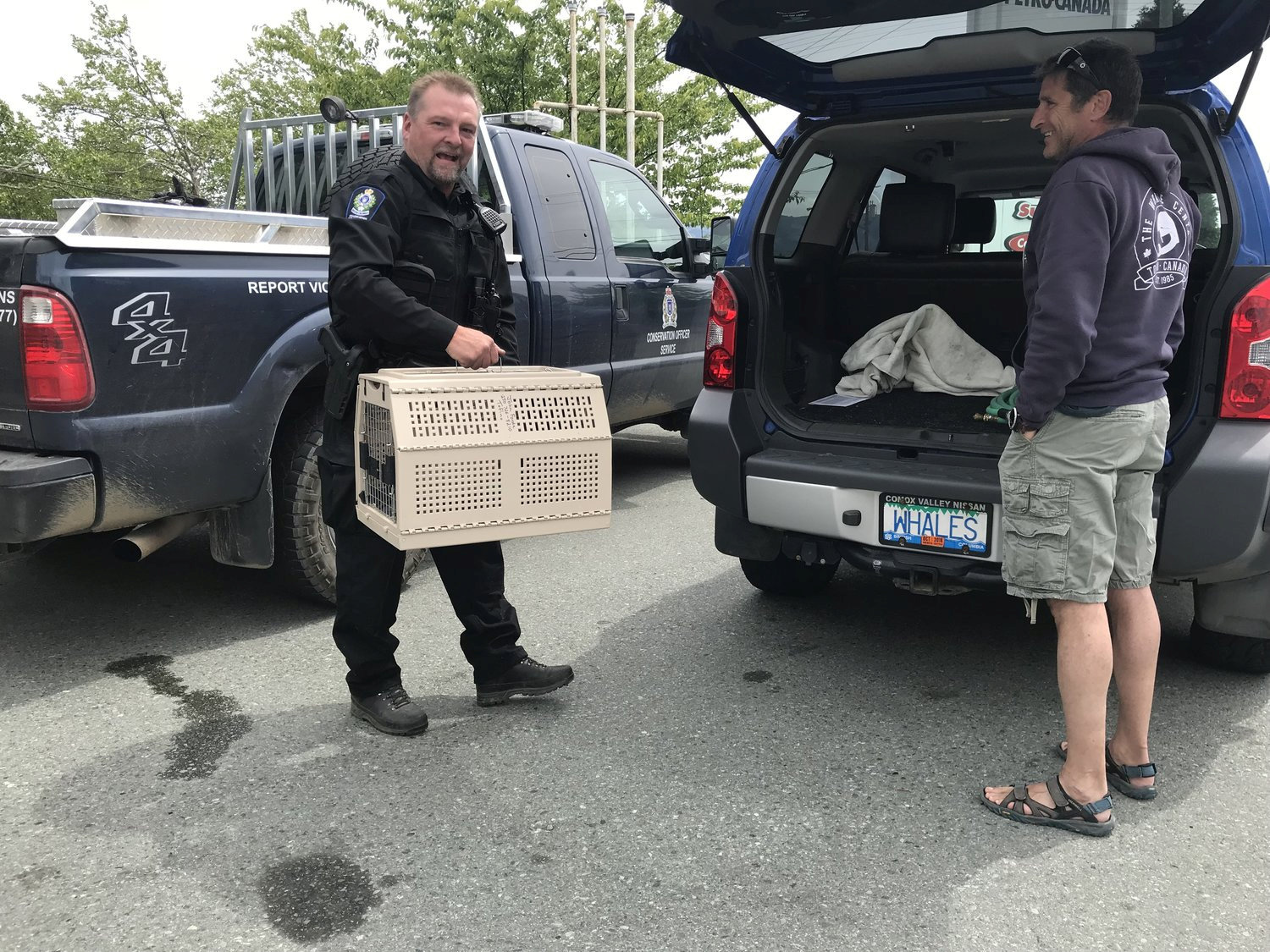 “The next morning we returned and I could see that the cub was once again laying on its mother.

“This time, I approached more cautiously and I managed to capture it.

“It was so tiny and underweight. It was distressed to leave its mother and was screaming but we knew it was the only way it would survive.”

Vets believe the male cub was trying to suckle from his mom for two days after she had died and rapidly became malnourished and dehydrated.

However, he currently remains in intensive care in the center but it is hoped he will be released back into the wild when he is strong enough.

Although the cub has yet to be officially named, John believes Ross would make for an ideal moniker, as the cub bravely survived Ross Pass.

John said: “We’re so happy the cub is doing well.

“He was only about 4lbs when we found him and he should have been 10lbs. The North Island Recovery Center do such great work.

“He doesn’t have a name, but my kids definitely think he should be a Ross, considering that’s where we found him.

“The hope is that he will be released back into the wild when he is big and strong enough. It always feels wonderful when a situation like this has a happy ending.”