THE GATE ESCAPE: This is the moment a mischievous three-year-old got his head stuck in the garden gate

Collect photo of Jayus Collier who was stuck in a gate.

This is the moment a mischievous three-year-old boy was involved in his own “rescue mission” – after he got his head stuck in a garden GATE.

Jayus Collier was firmly trapped for around 20 minutes before he was eventually freed by firefighters who used a special tool to prise open the bars.

The youngster, described as a “whirlwind” by his mum, luckily didn’t receive any injuries during the real-life emergency on Bank Holiday Monday.

The drama began when he popped his head through the metal bars to peek at his mum Rebecca Clarke, 34, when she was putting the bins outside their home.

She had only turned her back for a few seconds and couldn’t believe how he had managed to fit his head through the 10cm gap.

Care worker Rebecca desperately tried to prise the bars open and used baby oil to grease his head before calling the fire brigade who rushed to the home in Huddersfield, West Yorks.

The mum-of-two said: “I had left Jayus at the gate while I put the bins out. He was with the dog so I shut the gate to keep them in.

“When I turned around he had his head stuck in between the bars.

“Jayus was laughing at first, but when he saw my face he knew something was wrong.

“I immediately ran upstairs and got some baby oil.

“I rubbed it around his head and neck and ears but he wasn’t budging.

“I tried to pull him back through while squashing his ears down but it didn’t work. He screeched at me to stop.

“He wasn’t crying at first but then his poor legs started aching from standing hunched over in the same position and that’s when I took the photo. 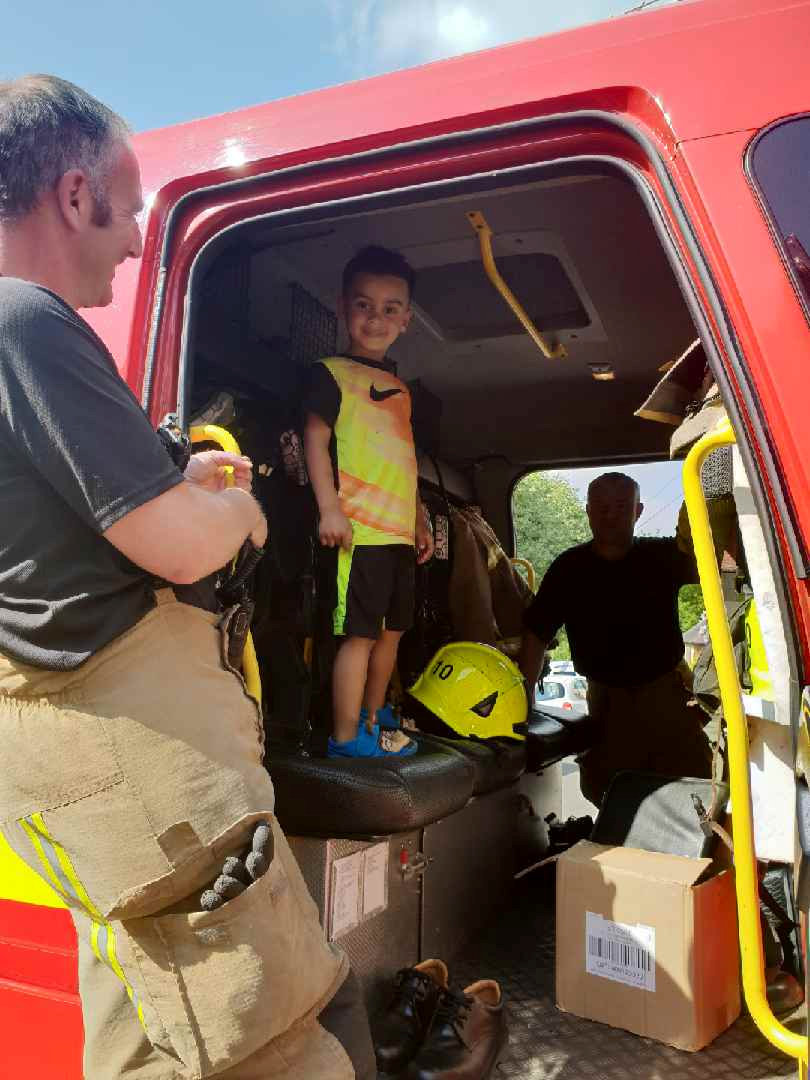 “Mobile-obsessed Shona told me I had to get a picture so I could capture this moment to show him in future.

“Luckily Jayus cheered up when I got him a pillow so he could lie down.”

Rebecca, who also has daughter called Shona Clarke, 17, then rang her mum for advice on what to do.

She said: “I was panicking and getting all hot and bothered but I was scared to ring 999, but my mum said to go for it.

“She said ‘If this isn’t an emergency then I don’t know what is.’

“The fire brigade then arrived within minutes. They were very good.”

In all, poor Jayus was trapped for around 20 minutes.

At first, firefighters tried to twist and turn his head but when that didn’t free him they had to resort to a special tool to prise the bars apart.

While it was happening, Jayus, who is a big fan of TV cartoon rescue dogs PAW Patrol, said: “This is my own rescue mission isn’t it, mummy?”

Jayus loves the TV show with his favourite character being Marshall, the firedog – until his adventure, it used to be Chase the police dog.

Jayus was then rewarded with a look at the fire engine and a chat with the firefighters.

Rebecca said: “In the end, he was a very brave boy, he is a whirlwind though, I have to keep an eye on him at all times.

“He is into everything and doesn’t stop from the moment he gets up ‘til he goes to bed.”

The last time he was up to mischief was when he went missing in DIY store B&Q while his mum and dad were buying a new kitchen.

Staff and customers were helping to find him and call out his name, giving them all a fright.

He was eventually found in a kitchen cupboard.

Rebecca said: “I asked him why he didn’t answer when we were shouting him and he told me he was playing hide and seek and I’d know where he was if he called back.”

A fire service spokesman said Jayus had been “really brave” as officers worked to free him.

They added: “After we freed him he had a cuddle with his mum and then we showed him around the fire engine. He was a really brave boy.”

They pushed the bars on Rebecca’s gate back into position before they left.