Lynette with her new car. A son surprised his doting mum with a gift - the car she sold 12 years ago to pay for his music career.

This is the heartwarming moment a son surprised his doting mum with a gift – the car she sold 12 years ago to pay for his music career.

Ross Rothero-Bourge, 30, used to travel to gigs all over the country carrying his drum kit in a trailer towed behind his battered, old Renault Megane.

Mum Lynette Rothero, 63, realised Ross’ situation was far from ideal and traded in her beloved new Ford StreetKa to buy him a van.

The generous gesture in 2004 left Lynette virtually broke and Ross promised himself one day he would replace the blue soft-top.

So Ross, from Falmouth, Cornwall, picked up the exact same model from the same year and gifted it to his mum – just as her car failed its MOT.

He recorded his journey and the handover in an adorable video which has been watched thousands of times on Facebook.

Ross, now a sound engineer, said: “Lots of people have been saying what I’ve done is amazing, but it’s nothing compared to what my mum’s done for me over the years.”

Ross started his career as a drummer, and would tow his kit to gigs all over the country.

“I couldn’t reverse it, it was knackering the car and was probably illegal. I was driving it all over the country for gigs and getting myself in all sorts of trouble.

“I was in desperate need of a van. Mum was worried sick I’d end up having an accident.

“She part exchanged her car, which she’d only just bought and was the only one she’d ever owned from new, to get me a van so I’d be safer.

“Mum bought it in 2004. I’m not sure how long she had it but it was only for a year or two. She was still paying payments on it.

“She cried when she part-exed it and it absolutely ruined me.

“She had to share a car with my grandad after that. I always swore that when I could afford it, I’d make it up to my mum.” 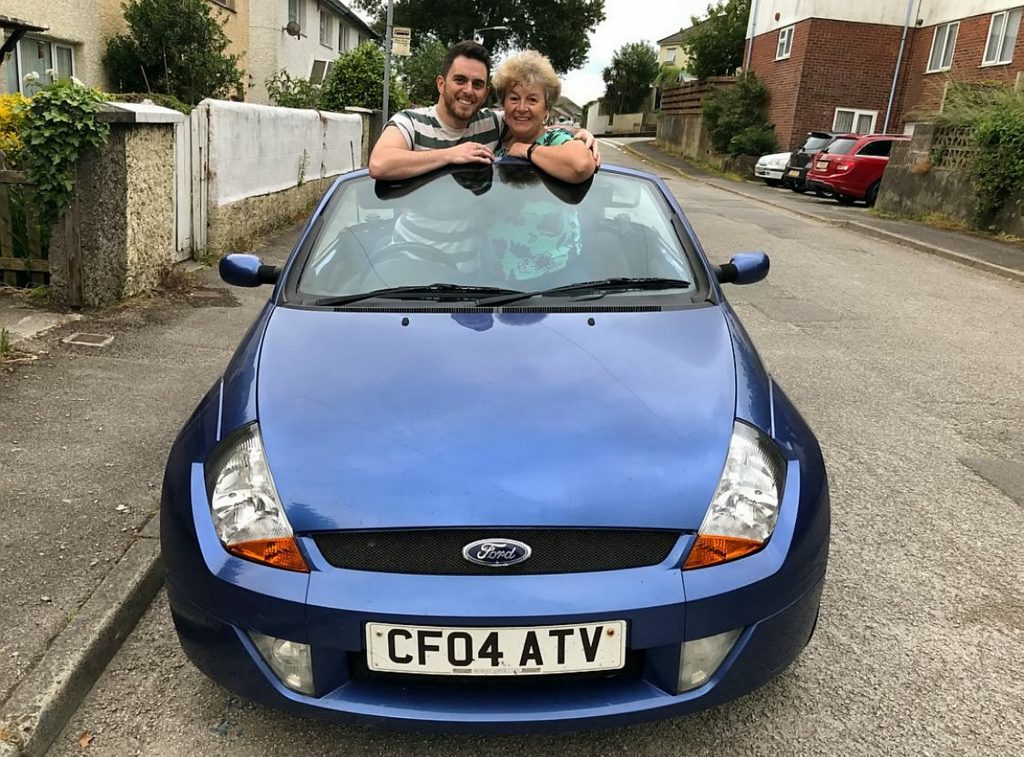 After scouring eBay, Ross surprised his mum with the StreetKa – not exactly the same one, but nearly identical.

Ross filmed himself driving the car to his mum’s house and telling her “Look, did your car look like that before you left your Zumba class?”

Worried, she rushed outside to inspect her old Ford, completely ignoring the swanky car across the road.

Ross throws her the new keys and puzzled she looks around and starts laughing before bursting into tears of joy and hugging her son.

The video, which has been watched by 5,000 people, ends with Ross and Lynette, cruising along, top down.

Lynette said: “I’m absolutely delighted. I never thought I’d see my StreetKa again in a million years. I have the best son in the whole wide world.”