Video grab of the STARTLING moments a London tube journey turns violent when a young woman smashes a bottle after an argument with some fellow passengers on the Central Line near Liverpool Street Station, London. December 27 2018.

This is the shocking moment a female thug smashed a bottle during a row on a London Underground train.

The woman, aged in her early 20s, was involved in an angry confrontation with a group of men on the Central line service in the early hours of today (Dec 27).

As the service approached Liverpool Street she produced a bottle and smashed it against the hand rail before threatening the males with it.

She had to be restrained by her friends as the carriage was showered in glass.

The footage was filmed by a 49-year-old passenger who had enjoyed Boxing Day at a friend’s house near Mile End, London.

The commuter, who wishes to remain anonymous, recalls how glass “covered” the train carriage.

He said: “It escalated very quickly. There was a lot of pushing, shoving and shouting.

“I think a drink had been thrown over one of the guys and the girl grabbed the bottle.

“She smashes it against the handrail and glass shattered everywhere. The whole bottle was sent flying.

“It was an absolutely insane thing to do. It could have been incredibly dangerous.”

At the time of the incident the train was occupied by several passengers, who decided to move away from the two groups as the situation escalated.

The man who filmed the clip began to start filming when the two groups of four to five woman and men, aged in the late teens or early 20s, began to start arguing.

He says he is unsure what sparked the heated bust-up, which he describes as “out of order”.

“Luckily there were not young or vulnerable people on the train”, said the commuter, who was travelling between the Holborn and Mile End tube stations. 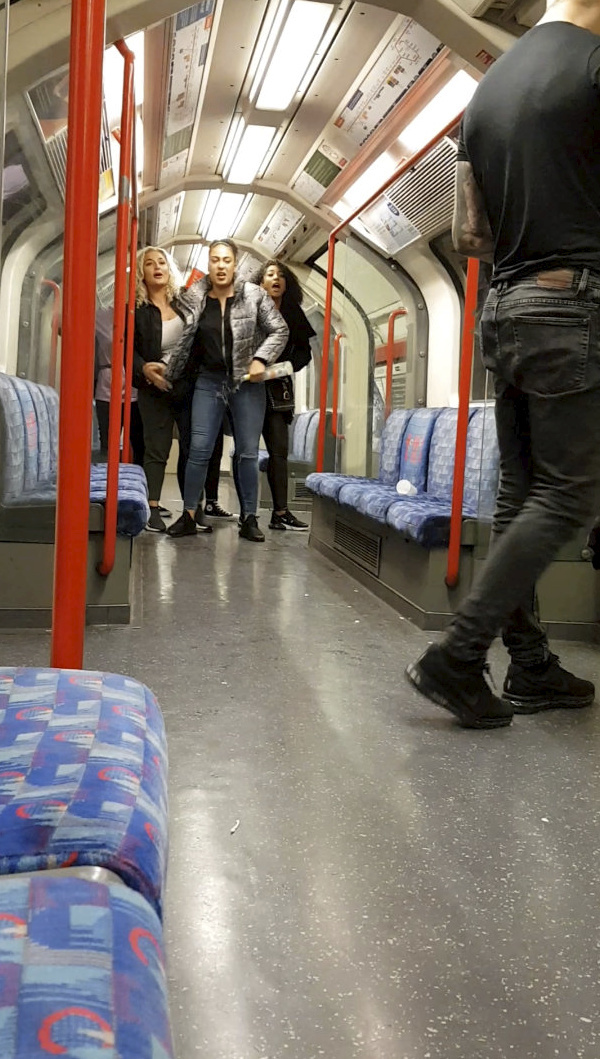 He added: “The people who were sat close by had to move because it did get very loud and aggressive.

“It got quite threatening and I could see that it was kicking off. Both groups were as bad as each other.

“It was a violent situation. Someone could have been seriously hurt. Glass could have gone in someone’s eye.

“It’s disgusting how something like that can happen on public transport.”

The commuter adds how he stopped filming and “ran off” the tube when the groups spotted him filming the bust-up.