This is the terrifying moment a topless man launched himself at a car - which was being driven by a learner driver - and headbutted the windscreen while 'ranting' at the occupants.

This is the terrifying moment a crazed pedestrian ran up to a car being driven by a learner driver and started repeatedly HEADBUTTING the windscreen.

Mitchell Bryan, 18, was driving down a residential street during a mock test when a topless attacker ran into the road and launched himself onto the bonnet.

After sliding part way down the roof, he smashed his head into the windscreen while shouting abuse at the young motorist and instructor Sharon Hopkinson, 57.

Sharon then told Mitchell to drive on but to the pair’s horror, the ranting thug chased after them while they were stuck at a red light.

Luckily, the traffic lights turned green before he arrived and they were able to drive away to a police station to report the frightening incident.

Sharon, who runs the 5 Star Driving Academy, and Mitchell had been driving in Long Eaton, Derbys., when the bizarre attack took place on Sunday (24/6).

Mum-of-two Sharon, of Sandiacre, Notts., said: “I was taking out my student Mitchell who is test-ready but hasn’t passed his theory yet.

“I was performing a mock test on him, and his driving had been excellent.

“I had just asked him to pull up on the left but as we moved on I saw a pedestrian on the pavement.

“I said ‘just be aware – there’s a person behind this van’ and then he was in the middle of the road.

“He started running towards us making noises like a wild animal. 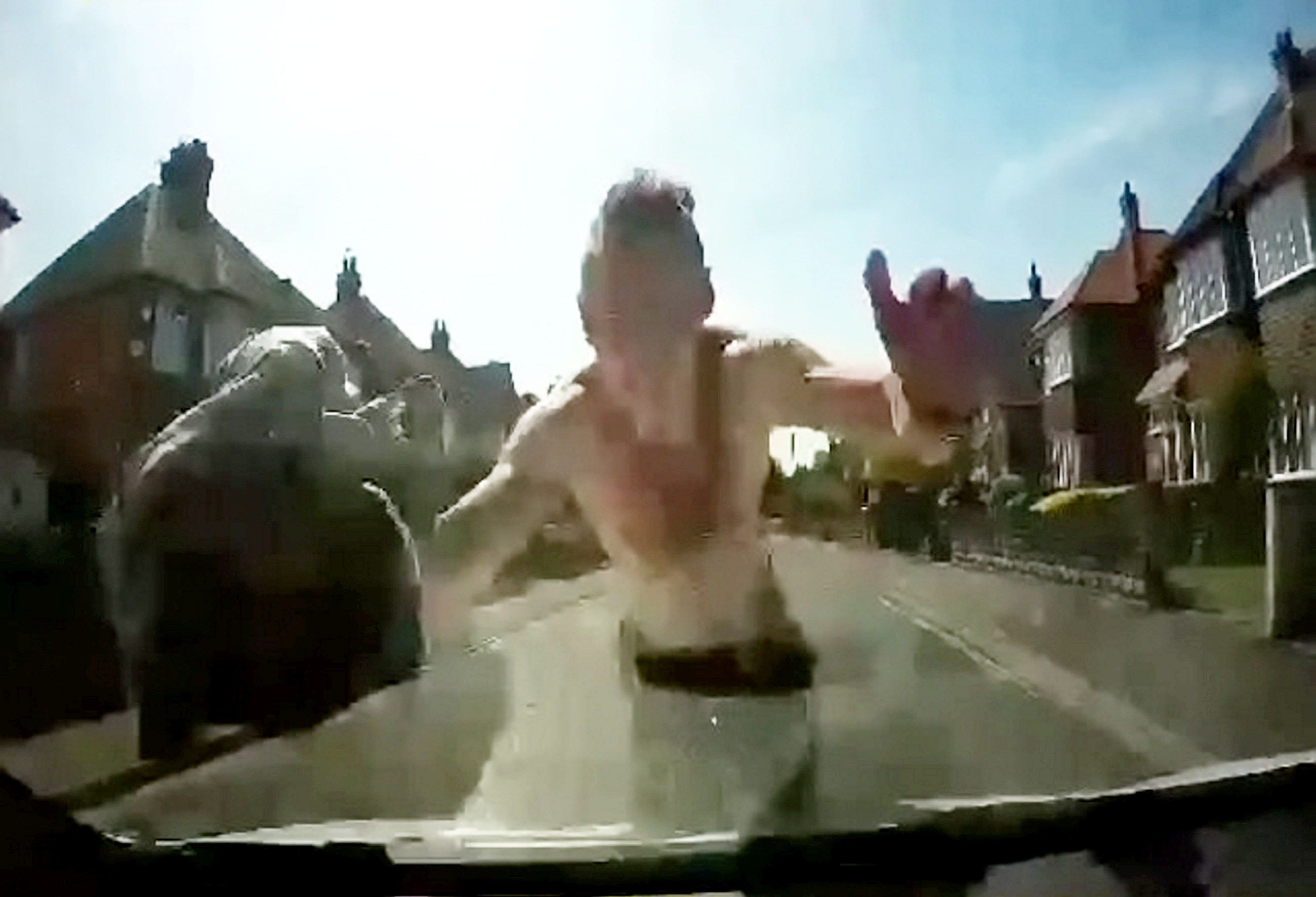 “I said ‘stop the car’ and then he ran up onto the car, onto my roof. I was shouting out the window ‘it’s on camera you know’, thinking he would go away.

“He slid down the windscreen and he started head butting it four times. He swearing, shouting and being abusive.

“It really terrified me. It was incomprehensible what he was saying but it was lots of swear words. He did the last head butt to my side of the car.

“I said ‘drive, drive’ and Mitchell was so good. I’m so proud of my student. He was very calm.

“If it was another student who couldn’t get the car started again, I dread to think what would have happened if we had to swap seats.

“He got the car going again and we carried on down the road and then we got to traffic lights where there were road works.

“I looked in my rear view mirror and the man was chasing us. Luckily, they changed to green before he caught up with us.

“I can’t stop thinking about it. It scared the hell out of me. Was he taking advantage of a learner driver?

“I have never seen anything like this before. Being a driving instructor you see lots of incidents – it’s part and parcel of the job. But this terrified me.

“I would say he was in his late 20s. It was like he was possessed. I was thinking ‘is this one of those Spice people?’.

“He was definitely on something, or was just deranged.” 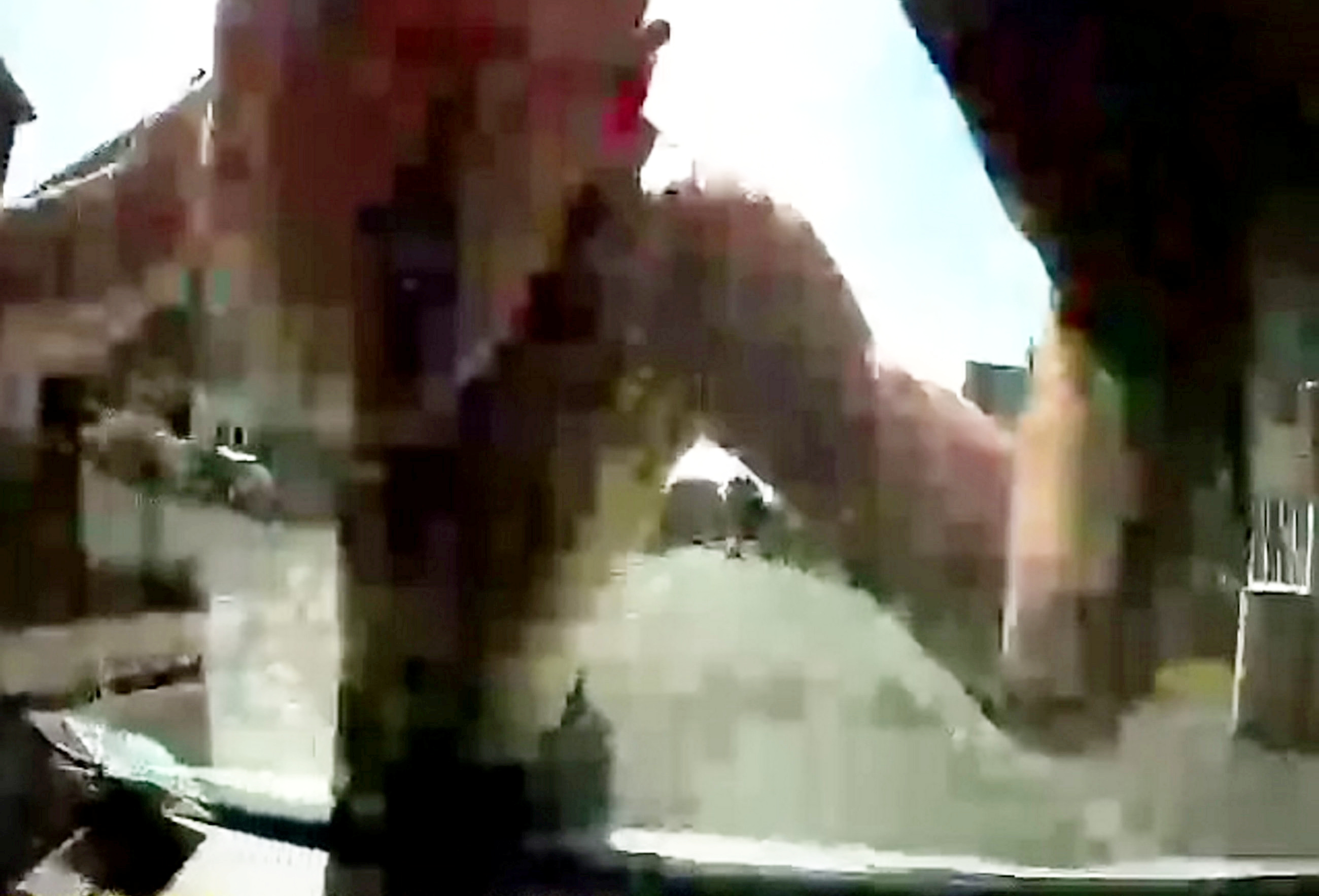 Sharon posted the video on a driving instructors’ forum as well as social media and it has now been viewed over 15,500 times.

“This has seriously made me doubt I am in the right job.”

Derbyshire Police are now appealing for information about the incident and urging anyone who knows the man to get in touch.

A force spokeswoman said: “He was a white man in his late 20s, of a slim build.

“He’d got no top on and was wearing jeans.”

Anyone with any information about the incident is urged to call Derbyshire Constabulary on 101 and quote reference number 18000292248.

The Story of Duracell Batteries