This is the dramatic moment firefighters rescued a seven-year-old boy who got trapped for three hours – inside a National Trust monument.

Adventurous Max Morgan was with his mum and two sisters when he clambered on top of the stone statue and fell through a gap between two supporting pillars.

His horrified mum Jana, 36, desperately tried to haul her son out but Max’s right leg was firmly wedged inside the circular-shaped base.

She alerted National Trust staff who also tried to help but they were forced to dial 999 after they too failed to rescue Max.

Firefighters dashed to the historic property and used specialist cutting equipment, normally used to free car crash victims, to saw off the top of the statue.

The freak accident happened as the family enjoyed an Easter holiday walk around Wightwick Manor, near Wolverhampton, West Mids., on Tuesday (3/4).

Max’s family, from Lower Penn, Staffs., have been going to Wightwick Manor for walks for years and George was even pictured sitting on the statue when he was aged two.

But the latest pictures of him on the monument were taken by West Midlands Fire and Rescue Service and the Technical Rescue Unit who saved him.

Mr Morgan, 38, a dental technician, said: “They were in the woodlands area were kids play, we’ve being going there since the kids were young.

“It’s a place where you can let your play and have fun or even walk the dog.

“The monument is one which is climbed on a lot by kids.

“Max has actually being playing on it since he was around two years old, but unfortunately this time he fell into the hole on top of it.

“The monument is like two pillar tops placed on top of one another, the hole on the top one is smaller than the bottom.

“The hole is about 3ft deep, Max was climbing on top of it and managed to fall in, and he was crouched down inside and got his knees stuck.

“Staff from the Trust tried to help pull him out but it was no good.

“I was at work as my wife Jana called me to say Max had got stuck in the monument.

“She sent me a picture, so I quickly made my way over and called the emergency services.

“A fire crew tried to get him out but again, no luck, so they called a specialist team, who arrived with different tools.

“They managed to cut through the bottom of the monument to free Max.

“He was finally free at around 6.30pm, Max was worrying but my wife managed to calm him by singing to him.

“The fire crew were great too, they put a fire helmet on him and a towel around him to make him feel safe.

“We’ve being going to the trust for years, I even got pictures of Max on that same monument when he was two years old.

“We were there a few months ago as well and it was all fine, there area is usually fine for kids to play in.

“Lots of families take pictures on the monument, it’s just normal for kids to play there.

“Max is our little hero, you can’t blame him, it was just one of those things.

“We are National Trust members and I’ve got pictures of Max from when he was two or three in the same hole but I think he has grown a bit more in the last few months.

“We just want to say a big thank you to the firefighters, NHS workers and paramedics who helped him.”

Mum Jana added: “We called the emergency services, when we couldn’t pull him out.

“The fire crew tried for about an hour or two to get Max out but weren’t able too, so they called a specialist service.

“They came with tools to cut open the monument, it was very worrying.

“Max was losing the feeling in his toes and is also claustrophobic so he was panicking.

“But we calmed him down and the specialist team were able to set him free.

“He’s fine now, the emergency service were really good to him, I can’t thank them enough.” 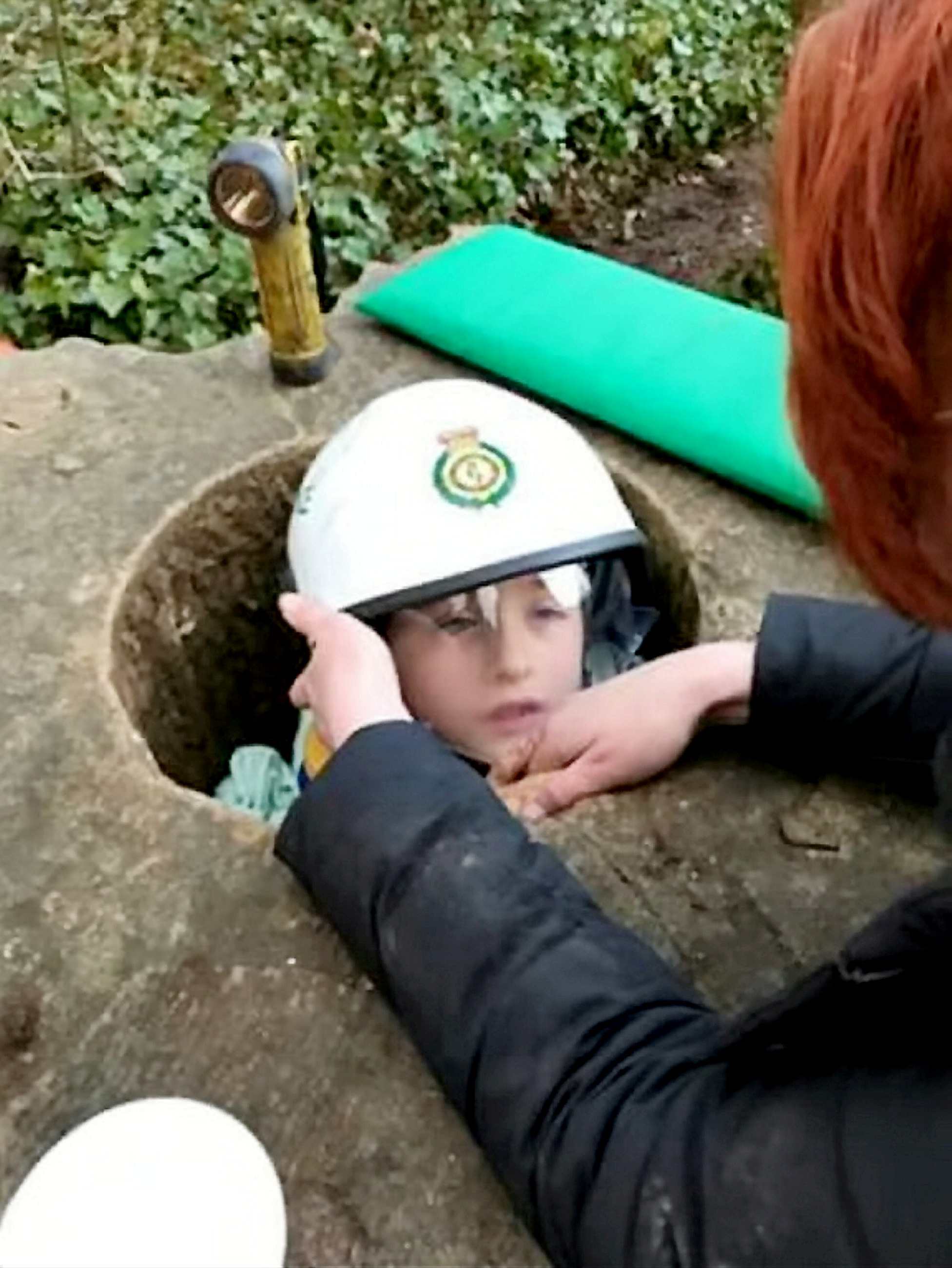 He added that rescuers used an abrasive wheel to cut the stone in half before Max was checked over by paramedic.

He was taken to A&E but was found to only have some bruising to his leg and was discharged.

The 19th century Wightwick Manor was built by the Mander family – a prominent local family of industrialists and philanthropists – and gifted to the National Trust by Geoffrey Mander, the then Liberal MP for Wolverhampton East, in 1937.

The stone monument which Max Morgan became trapped inside came from the original Palace of Westminster, which was destroyed by fire in 1834.

A National Trust spokesperson said: “We can confirm that a young visitor to Wightwick Manor and Gardens became entrapped in part of a stone pinnacle within the gardens.

“Initial attempts to free the child were unsuccessful so a specialist fire service rescue unit was called in to extract him.

“The stone pinnacle is one of a number of pieces of decorative masonry that Sir Geoffrey Mander salvaged when works were being undertaken at the Palace of Westminster (the Houses of Parliament); in the early 1930s.

“The stone structures came from the original Palace of Westminster, which was destroyed by fire in 1834.

“Sir Geoffrey had the pieces transported to his home at Wightwick Manor, and they’ve been in the garden for 85 years.

“Hopefully the monument is salvageable, the way the fire service cut into the structure means that most of it remained intact.”

Detectives probing the murder of a community hero in London have offered a £20,000 reward for information

family pet saved from house blaze thanks to dog monitor

family pet saved from house blaze thanks to dog monitor