by Ed Chatterton
in News
1

Andy Gates, 28 and Elivia Frixou, 27. Andy's heart-warming film documenting his proposal to his girlfriend has gone viral after he secretly filmed the build-up to the big day.

A love-struck romantic’s heart-warming film documenting his proposal to his girlfriend has gone viral – after he secretly filmed the build-up to the big day.

Andy Gates, 28, had been planning to pop the question to Elivia Frixou, 27, for six months and captured the moment on camera before turning it into a short amateur film.

The video starts by showing Andy a day before their flight to Portofino, Italy, and continues until the very moment he proposes to a stunned Elivia in a restaurant.

He can be seen shaving, using a tanning bed and going to the hairdressers as he spruces himself up in preparation for getting down on one knee.

It then cuts to him in a car saying to camera: “Just nipped to my mums to pick the ring up. Here it is – sneaky, sneaky.”

The clips then show the pair in the car on their way to the airport, before Andy makes a joke about ring shopping in the duty-free store.

Elivia, who works as a marketing assistant, can then be seen sleeping on Andy’s shoulder on the plane before they reach the Italian Riviera.

On the second day, Andy, who is lying in bed, says: “She’s just going into the shower, we’re only an hour away. Here we go.”

It then shows Elivia dancing and getting ready before the video continues in the Da I Gemelli restaurant.

Andy can then be seen getting up as Elivia puts her hands to her mouth before he gets down on one knee and proposes.

She then kisses him as the restaurant breaks out into applause and the camera zooms in on the ring.

Since uploading the romantic film to Facebook, it has gone viral being viewed more than 13,000 times.

The couple, who live in Melbourne, Derby, originally met on Tinder four-and-a-half years ago before Andy popped the question on March 24.

Andy, a manufacturers’ agent, said: “I’d never seen anybody put something like this on social media so I thought I might as well capture the moment.

“We can both look back at it and reminisce and show other people how I did it and how we went to such a beautiful place.

“I’m quite proactive on Snapchat,so it wasn’t really a shock the fact I had my camera out and was filming all the time with Elivia, she thought I was taking Snapchats.

“All I did was I took the videos, put them in a hidden file and when I had a bit of spare time uploaded it to movie-making software and edited it as I went along.

“When it came to the night, all I had to do was get the restaurant manager to film the big moment and it was all complete.

“It all went smoothly and perfectly to plan.

“I had planned it to be between the starter and main course, to drop the lights and play Ed Sheeran, Perfect, which is our favourite song.

“The response had been phenomenal – people have been saying how it’s made them cry and laugh.

“It gone bonkers, we’ve been stopped in the streets. Elivia was in Sainsbury’s last week and someone said, ‘are you the girl that has been proposed to?’”

Andy said the hardest part of the proposal build up was asking Elivia’s dad for his daughter’s hand in marriage.

He added: “Really, there were three things that I had to go past before I could relax.

“The first was asking her father, which was probably harder than actually asking her the question. I did that the Wednesday, a week-and-a-half before, over breakfast.

“Secondly, getting the ring through security – I made sure I wormed my way through to get five people in front of Elivia.

“When I put my bag on the tray I said to security, ‘there’s a ring in there, look after me’ and he wished me good luck on the way through and I got through without bleeping. 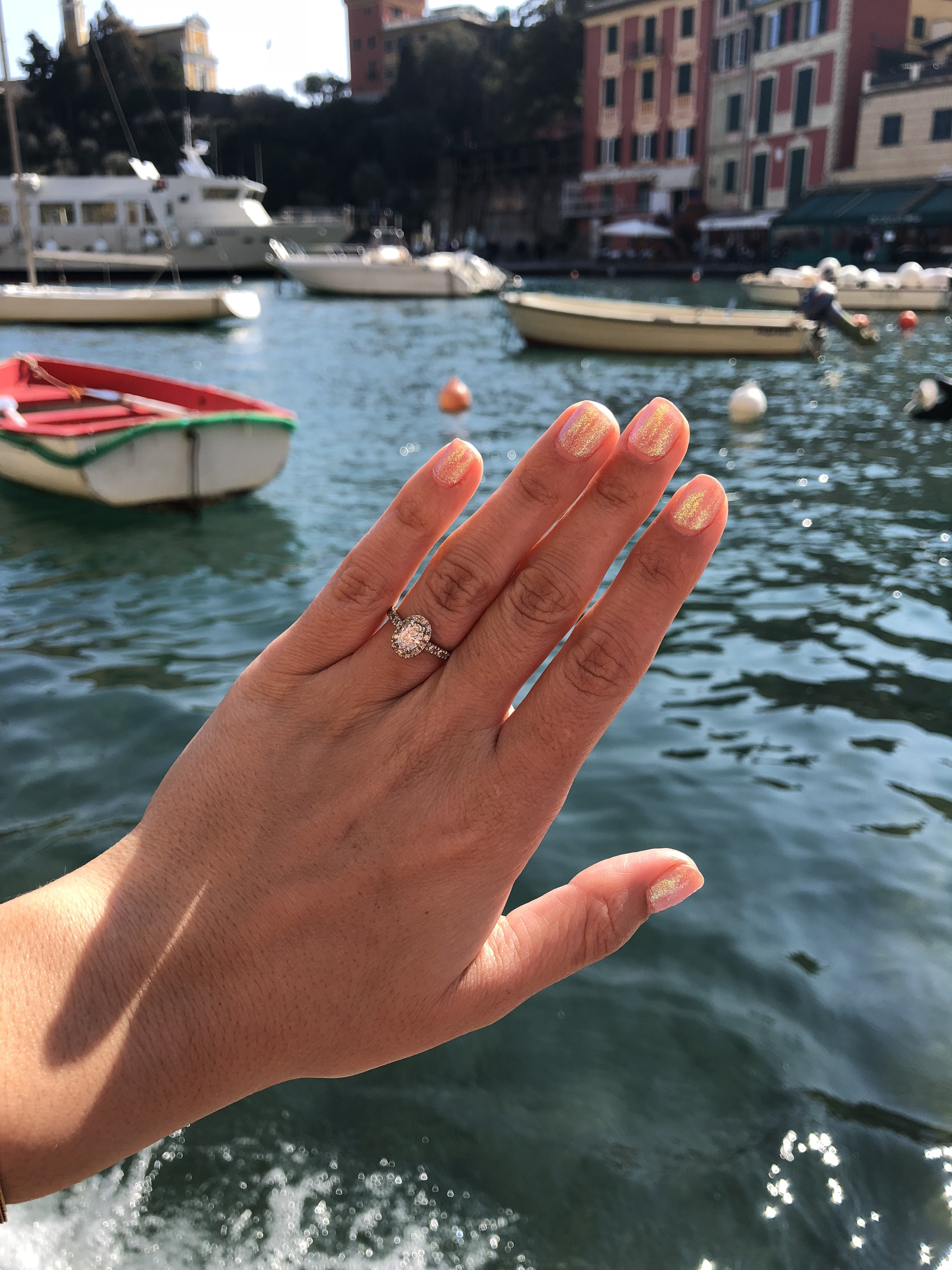 “The restaurant I had to book without her having a clue about it – once that was all in place I was relaxed and ready to rock and roll.

“When we first got there we got in the taxi from the airport to the hotel and we sat down and coincidentally the first song that came on was Ed Sheeran, Perfect.

“Elivia turned to me and said, ‘have you set something up here?’

“I said, ‘no, don’t be stupid, why would I set this up?’ – really I’m thinking, ‘if she only knew what song is going to be on in the restaurant in two nights.’

“On the night we get ready, walk down to the restaurant, have a drink close by. We then went in and they looked after us and we had beautiful starters.”

“Then they dropped the lights and the music came on and she looked at me and said exactly the same as in the taxi, ‘have you set something up?’.

The happy couple are looking to get married at Melbourne Church in August 2020.