A rescue dog which was saved after being starved to the brink of death has struck up an unlikely friendship – with a LIZARD.

Staffordshire Bull Terrier Skye was found weighing just 4.5kg – a third of its normal body weight – when it was dumped outside an animal shelter.

Shocked RSPCA staff said the six-year-old pooch was the skinniest they had ever rescued and even nicknamed it “X-ray dog”.

Skye spent months recovering at the Woodside Animal Centre in Leicester after being rescued in January 2015 until she was rehomed in the April of that year.

New owner Hayley Wessier, 30, took Skye in and the adorable dog has struck up a close friendship with her pet lizard, nine-year-old George. 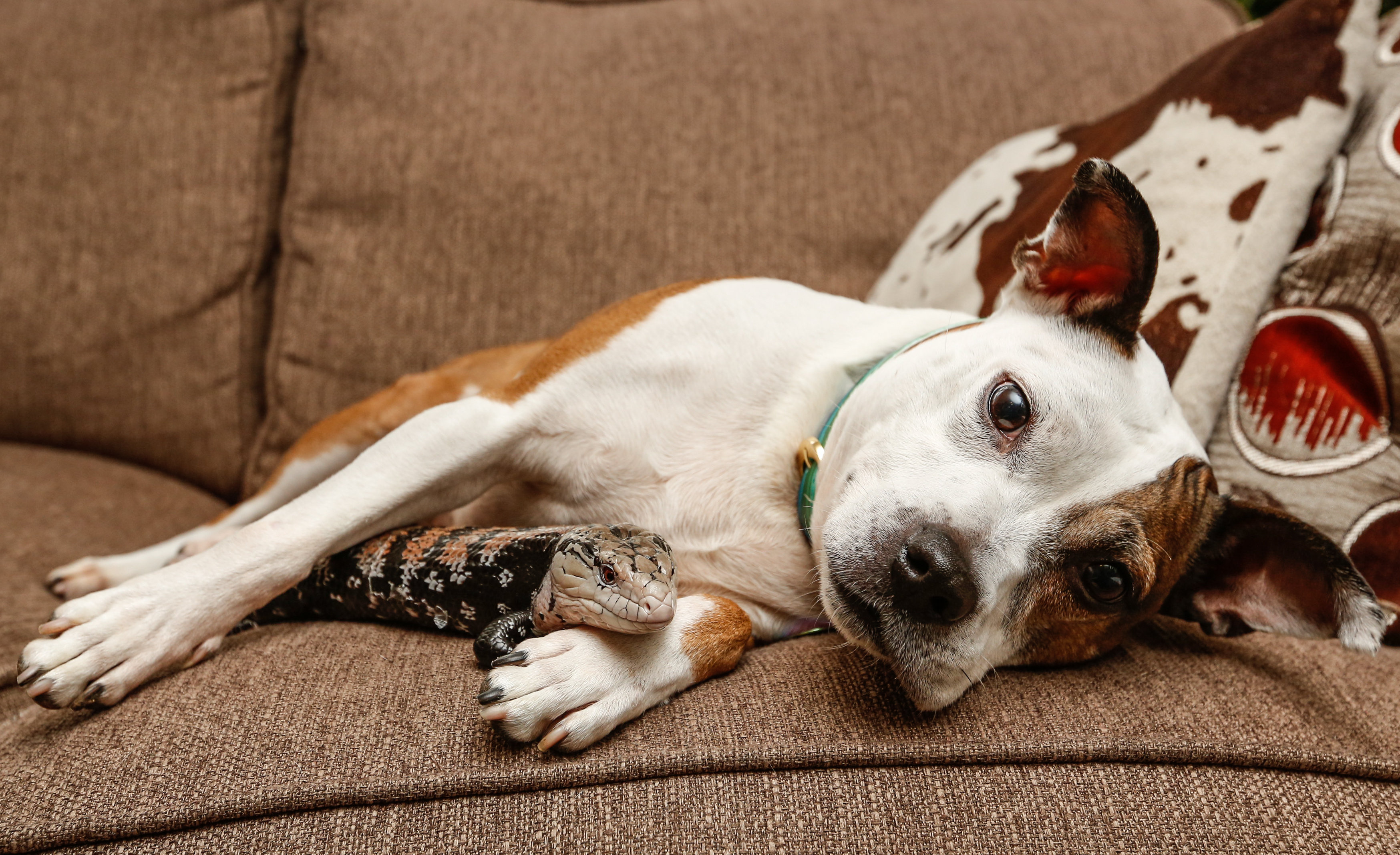 Skye and George, a blue-tongued skink, are now inseparable and even feed from the same bowl and curl up with each other on a dog blanket.

Fundraising manager Hayley, who lives with husband James, 43, in Leicester, said: “We originally went to look for a guinea pig or rabbit but thought we would just have a quick look at the dogs.

“I’ve always wanted another dog because I had a staff when I was younger.

“That’s when we saw Skye.

“She just came to the bars and was all sweet and little – you don’t expect a staff to be her size, she was about the third of the size of a normal staff.

“She rolled over so her belly was against the bars for us to stroke her and we kind of
just fell in love.

“She was licking us and loved my husband’s kids – it was love at first lick.

“So we took her for a walk and the rest is history.

“When the RSPCA found her in January 2015, she weighed 4.5kg which is the same size as a cat and that’s really small for a staffie.

“The inspector had said they had never seen a dog that skinny – when we got her a couple of months later she had put on a bit of weight and was about nine to ten kilos.

“We saw photos of her they nicknamed her ‘x-ray dog’ because when she moved she looked like a dog’s x-ray.

“Her hips would stick out in the back and she also had a problem with her eye from a vitamin deficiency.

“She needed love and when we walked home she struggled and was tired.

“We realised she hadn’t long walks so her muscles weren’t used to it, so we had to help her build her muscles up.

“We’ve had her now for nearly four years now – she now weights 13.5kg and is nice and healthy.

“She is a fantastic dog and loves everyone and everything.

“When we first got her she wouldn’t wag her tail and was shy and I had to teach her how to bark again. 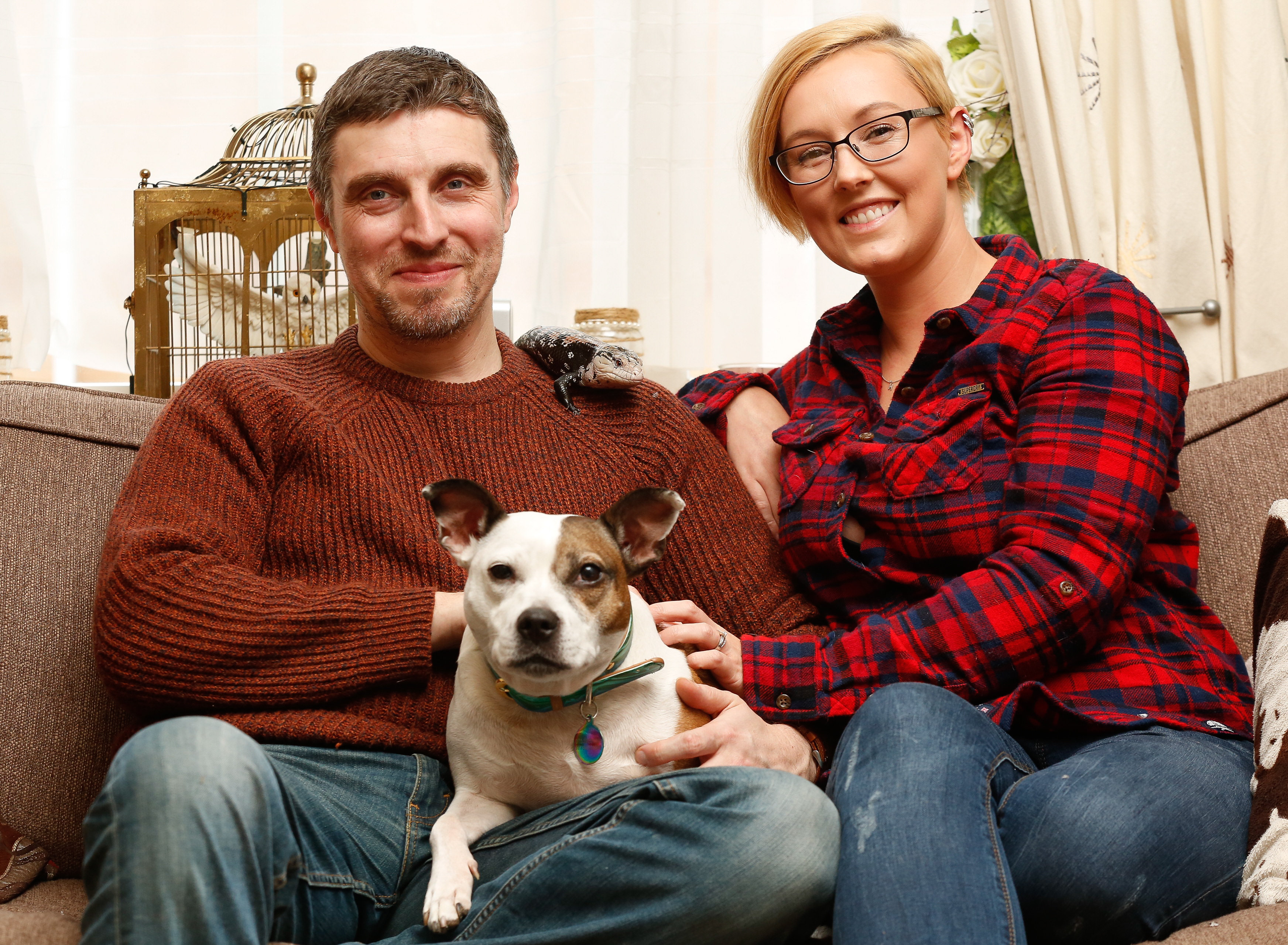 “Skye took to George straight away, she loves anything and everything. She will sit in the garden and watch the birds and is interested in other animals.

“As soon as she came in we showed her George after a couple of weeks and she was just fascinated with him.

“They can be found sunbathing together in the garden in the summer and even eat from the same bowl.

“I can’t imagine our lives without them.”

The RSPCA says Skye is one of the thousands of dogs it rescues, rehabilitates and rehomes every year.