An intrepid photographer is literally at the height of his career – taking stunning shots of some of the world’s most luxurious high-rise apartments.

Brave Zohaib Anjum, 29, has reached the top of his game by scaling dizzy sky-scrapers to capture the perfect shot of lofty properties worth up to £5m.

His work in Dubai takes him to the top of buildings as high as 264m tall where he will walk on the edge of the roof to get the best shots. 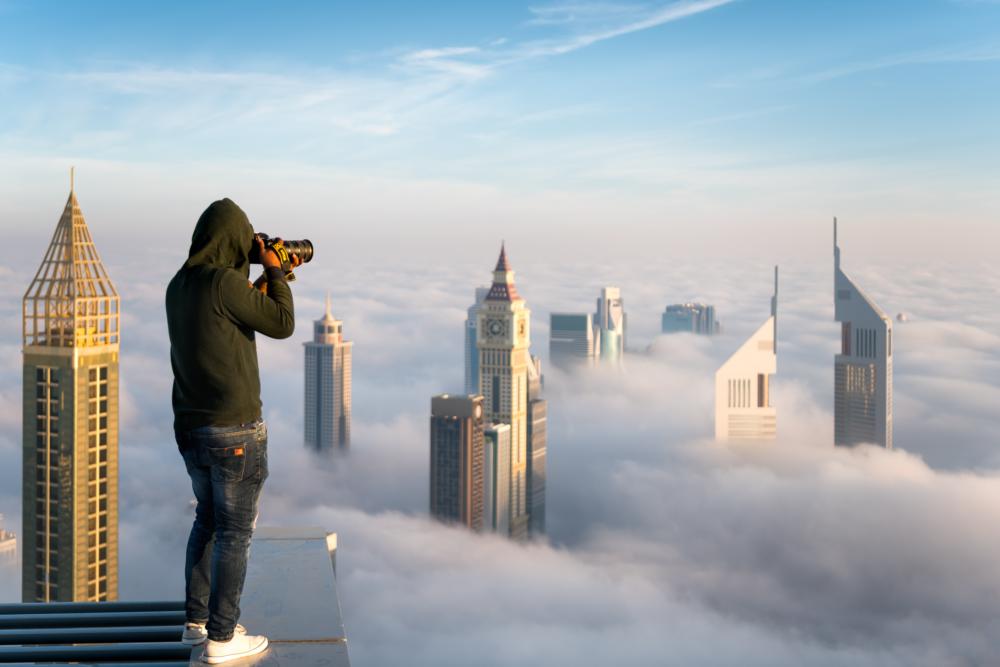 Zohaib said: “When I first started I said ‘wow it is a different world’, and now it is a habit.

“I am known as roof topper in Dubai. You have to capture the best in Dubai which means we have to take risks.

“I cannot see anything at all. Sometimes I don’t know where I am walking.

“I walk on the edge of the building but I have never slipped.

“Sometimes it is too windy and I can’t stand because the wind is literately pushing me so I sometimes have to tie my self to the building top.

“I really enjoy to capture all of this and it will never stop, it is in my blood, like how people smoke I have to do this everyday, it is my addiction.”

It takes him up to eight hours for Zohaib to do one shoot as he climbs as high as the 80th floor of Dubai’s buildings.

He has been working in real estate photography for the last six years and will stop at nothing to get the perfect shot.

Zohaib said: “I work for a top end real estate company in Dubai so I have got all the high point buildings to easily access.

“Everyday I shoot on the roof and everyday it will be a different roof of Dubai.

“If we don’t do it like that they won’t be published. They just want people to buy the apartment”.

“If I am doing a fog shot we have to go at the night around 12am and wait till sunrise.

“I set up my cameras and stay the whole night to capture sunrise so it takes like seven to eight hours.

“It is extremely cold up there and I have to a lots of jackets to cover up.”

Zohaib is most proud of his work photographing Dubai during the ‘fog season’ and capturing lightening bolts from the top of the Burj Khalifa.

Zohaib said: “I go out in all the weather especially when lighting strikes, it is very risky when you are at the top and you are shooting lightening strikes.

“I was shooting last year on the 67th floor on the roof and I was shooting from the Burj Khalifa because that gets hit many times with lightening strikes.

“After five minutes of me setting my camera up, it just hit the Burj Khalifa and it was so close to me i felt the power of the lightening bolt.

“I felt the electric shot and for five minutes I had to just sit there and think wow what just happened”.