Meet the world’s first ice-skating DOG – a lovable Labrador which spends its days at the rink after being saved from a rescue centre.

Five-year-old Benny has been learning to skate for a year after his owner, former skate coach Cheryl Del Sangro, 56, took him along to the rink on a whim.

She noticed that he was a natural on the ice and decided to take him under her wing and teach him how to skate.

Cheryl has since taken him training once every two weeks at the Las Vegas Ice Center, teaching him an array of tricks including turns, crossovers and bunny hops.

She even made Benny a special pair of ice boots by attaching blades to doggy shoes, which he wears on his front paws while using his back paws for grip.

Videos capture the talented pup whizzing masterfully around the ice – and one clip has even racked up 30,000 views on Facebook.

Cheryl, of Las Vegas, Nevada, rescued Benny as a pup from a rescue centre, where he would have been put down if an owner was not found.

She said: “From day one, I couldn’t believe how anyone could not want this dog.

“He was absolutely perfect. We had this bond from the first day.

“He’s the happiest dog, and he loves learning new tricks.

“Now, you can’t keep him off the ice. He just keeps getting better and better.

“You can’t help but smile when you see it.”

She added: “We’ve looked into it and we can’t find any other dogs that can skate.”

Cheryl has been skating since she’s four and was a semi-professional in her twenties, but opted for a career in coaching which she pursued for 20 years.

She later gave up the career to run a restaurant with her husband Flory, 68, and daughter Brittany, 35.

Cheryl decided to pop into the rink for a spin and instantly fell back in love.

Shortly afterwards, she decided to take Benny onto the ice with her at the suggestion of a pal – and quickly realised he was a natural.

She said: “Last winter I started skating a little bit just for myself to stay in shape.

“A friend of mine said we should make a video of Benny, getting some shots of him on the ice and I said, ‘OK, let’s do it.’

“He followed me around and was running after me on the ice. Maybe because it’s so hot here in Nevada, he enjoyed being out there in the cold.

“He was rolling around on his back and everything. He enjoyed it so much.

“Our daughter, Brittany, I taught her to skate when she was 17 months old. I thought, well, if I could get little 17 month old to skate, why couldn’t I get him to skate?

“We took some dog boots and old blades and we glued them together.

“I had him on a leash first in the rink and I helped him along with his feet.

“He knows how to turn now, and do crossovers, and he can do little bunny hops with his front feet.

“He’s getting more powerful and soon we’re going to have to get the skates professionally put together.” 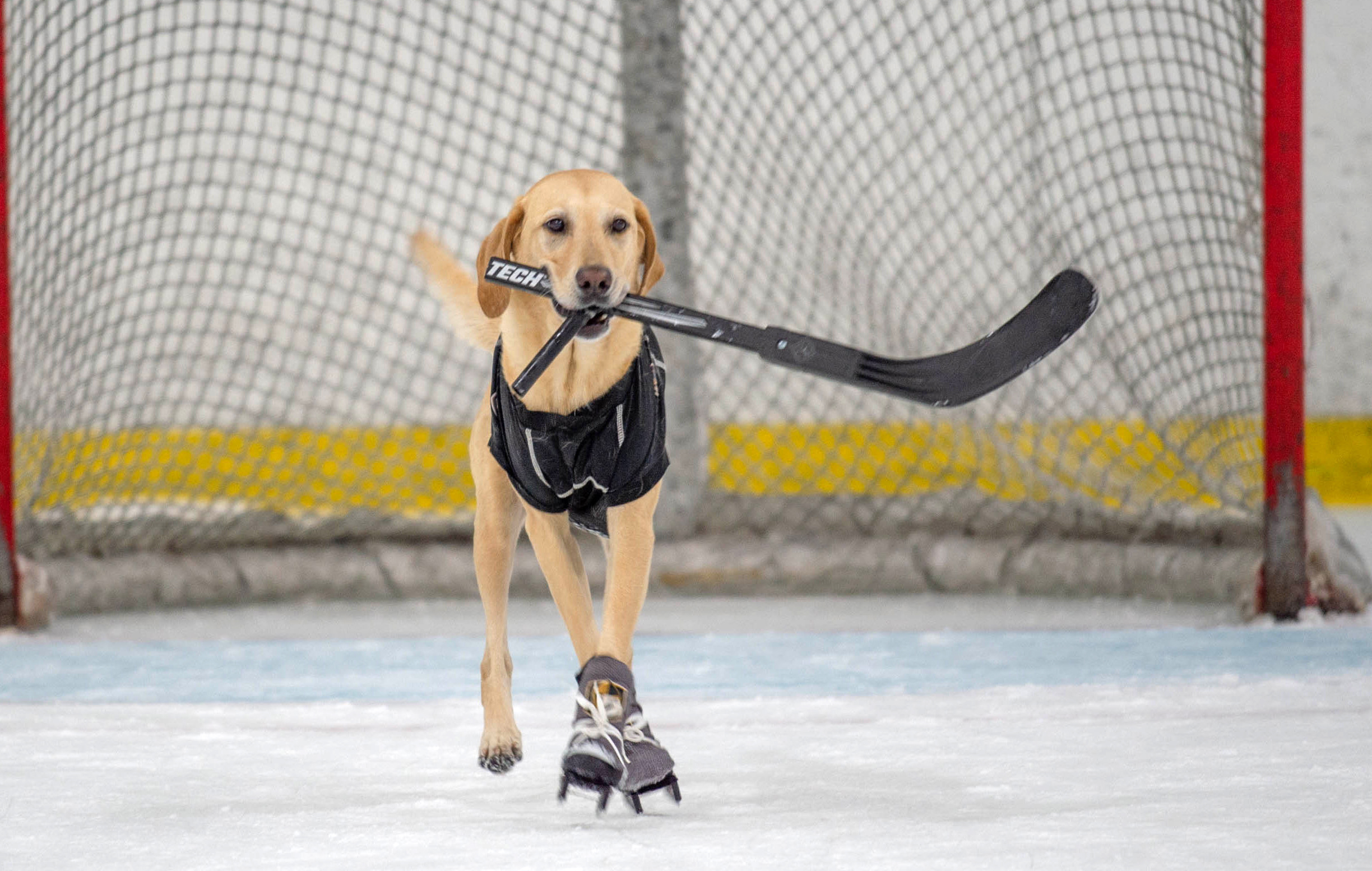 Though the accomplished pup has only been on ice for a few short months, coach Cheryl has big plans in store.

She plans to teach him a routine, get him spinning to music and hopes to secure him a part performing for the Vegas Golden Knights’ NHL team’s as on-ice entertainment.

She said: “Our mission is to get a little bit more ice time. Next, I want to teach him a routine, maybe to do a spin with some music.

“Every time anybody sees him skate, they just laugh. It’s so unbelievable.

“I had somebody offer me money to buy him a couple times since, but I would never, ever sell him.

“I don’t care how much they offered me, there’s no way would I ever give him up!

“I love all of my dogs, but I have a special connection with Benny.

“I can’t even imagine how close he came to being put to sleep.

“I know everybody says that about their dogs, but he’s such a special, different kind of dog.

“I wish I could’ve had him since the day he was born.”