Timmy the penguin.An aquarium on the other side of the world has just passed the first anniversary of a hilarious tradition - crowing naughty and good penguins of the month.

Naughty penguins are being named and shamed by a top aquarium for hilarious offending – including stealing fish.

The National Aquarium of New Zealand are shaming their meanest penguins each month for a their bad behaviour – which also includes pushing others into the pool.

They will put penguins on the naughty list for such behaviour as stealing fish, pushing other penguins off the pier and biting keepers.

Other anti-social behaviour includes being “a bit of a princess”, being an “egg-hogger”, and one poor penguin was shamed for being “outright obnoxious.”

Good behaviour includes encouraging lazy boyfriends into the water, helping blind girlfriends get around, being a good role model, and standing up for victims of penguin pier pushers.

The first naughty penguin of the month was crowned in June last year, but is now a firm favourite with the public.

Staff member Brenda Gunn said: “It all started in June last year, the keepers decided it would be a fun idea.

“Mo is definitely the naughtiest penguin and the worst influence.”

But Brenda said the team isn’t too hard on their birds – who are all ‘fairy penguins’, the smallest breed.

She said: “We don’t go as far as giving the penguins timeouts.

“The response from the public has been really good, there’s been a lot of interest. It’s clear everyone enjoys it.

“Working with the penguins is so enjoyable and very rewarding.”

Timmy, originally infamous for pushing over other penguins and stealing their fish, has stayed out of trouble for months and has even been good penguin of the month. 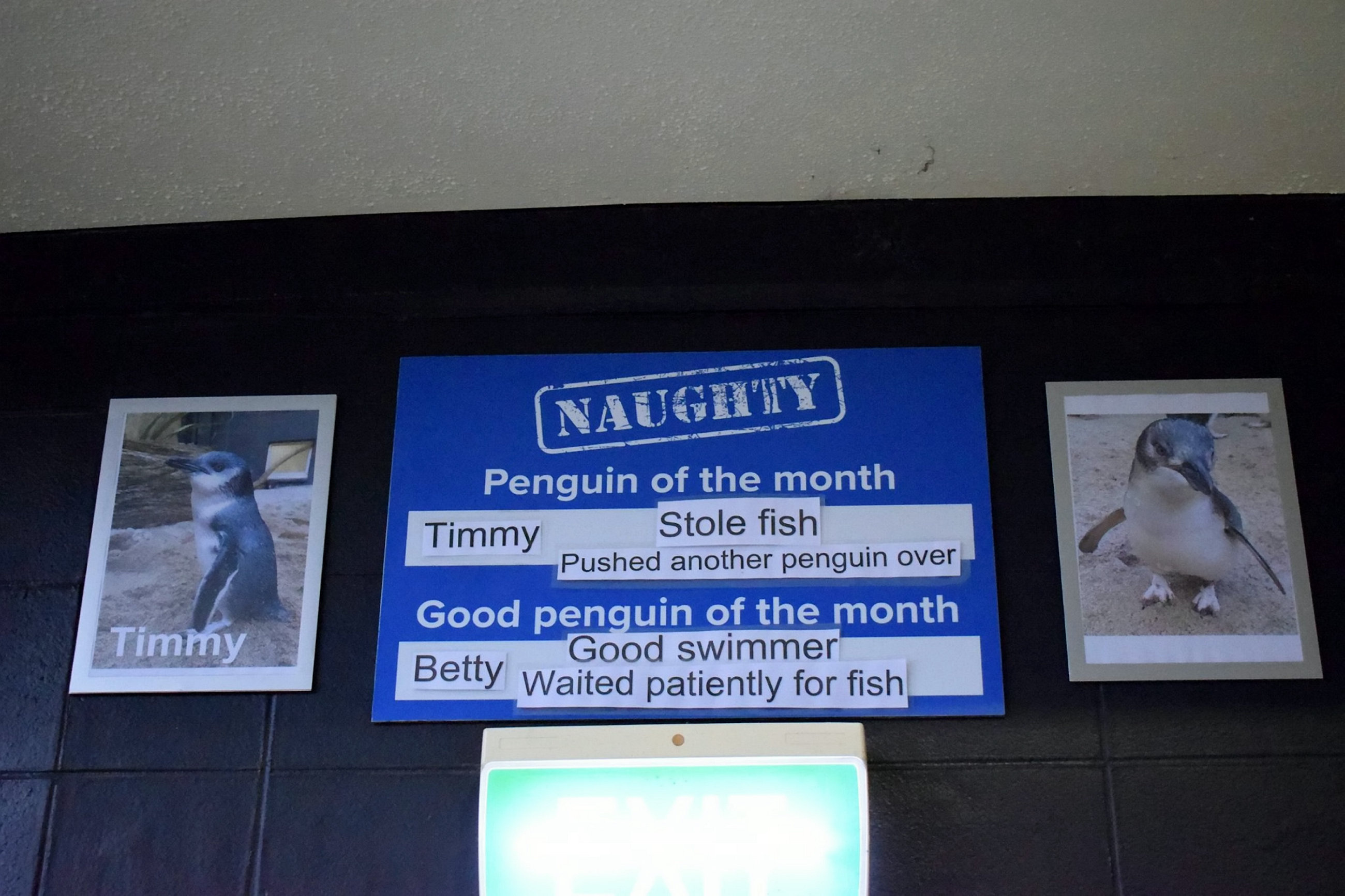 Introducing him last year, the team wrote: “Lets talk about Timmy, our naughty penguin of the month.

“We love Timmy, however he’s a regular offender of stealing fish and pushing other penguins out the way while flicking up sand in the process!”

Timmy was brought the sanctuary after he was found injured on a beach in Hawke’s Bay unable to walk.

Although he’s had one slip-up since – swimming during his moult – he’s managed to stay out of trouble since.

The public even rushed to express outrage when Timmy spent an hour walking to the pier only to be pushed in by Tux, who got the naughty title that month as a result. 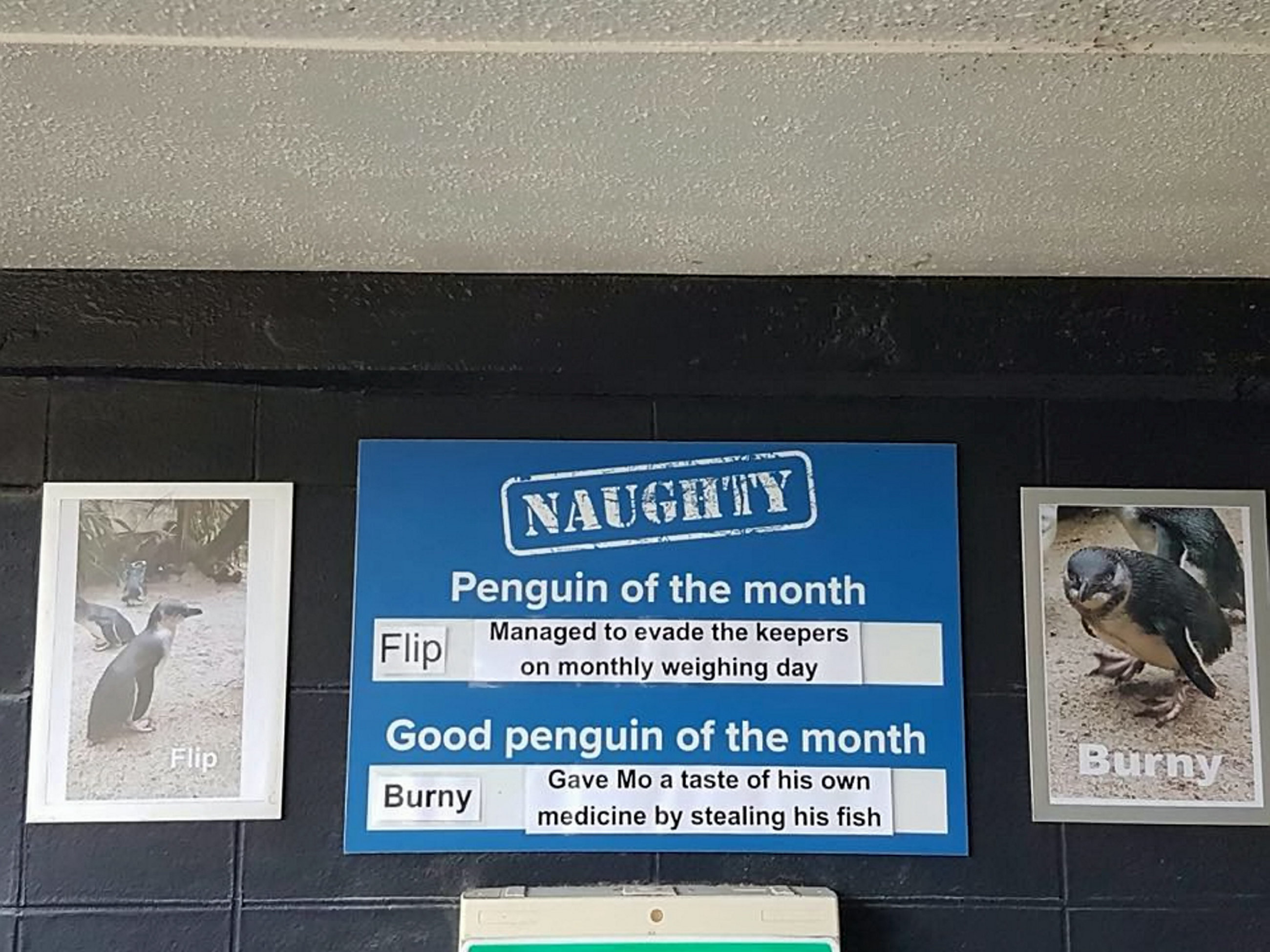 Flip might have been indulging in too much fish and is the current bad penguin of the month for “evading keepers on weighing day”.

However, Mo has been labelled “the worst influence” in the group, even teaching other penguins bad behaviour.

“He has been stealing fish but not even eating them, just dropping them on the sand.”

Burny was even named good penguin of the month for teaching Mo a lesson.

The keepers said: “Good penguin Burny gave Mo a taste of his own medicine by stealing his fish.”

Burny, current penguin of the month, has redeemed himself from an earlier mishap, when he was named worst of the punch.

They said: “The naughty penguin of the month is here.

“Burny was so good last month but has picked up bad habits from Mo.

“What a fall from grace.”

The aquarium in Napiers provides a sanctuary for injured penguins and a permanent home for those who wouldn’t survive in the wild.