A new mum was left screaming in pain after a botched cesarean section caused her bowel to ‘fall out of her body’.

Kelly Maynard, 31, was rushed back to hospital just 24 hours after leaving with her baby daughter Rosie-Anne when she realised her bowel had pushed its way out of her body.

Doctors delivered Rosie-Anne via emergency C-section on September, 28 after the new mum suffered complications involving her placenta – just six days after she had been sent home from an ante-natal appointment in pain.

Ms Maynard took Rosie-Anne home but a day later, on October 1, her bowel prolapsed and she had to be rushed to Royal Bolton Hospital for further emergency treatment.

Ms Maynard, who runs a mobile beauty business, says she has been left “traumatised” following her experiences at the hospital and claims her C-section scar was not correctly stitched up after birth.

Once home with her older children, 12-year-old Kayden, Mia, four and Daisy, three and baby Rosie-Anne, Ms Maynard felt an “indescribable pain” and realised she needed to return to the hospital.

Devastatingly, her husband Ray Maynard, 31, was told there were no ambulances and she would need to travel in a car; however, when her bowel prolapsed emergency services sent a vehicle.

She said: “At the time my bowel was prolapsing, all I could feel was crushing inside my body until it got so bad I said, ‘I’m going to have to go back in’.

“My husband was told there was no ambulance and to get me in the car, but when he checked, my bowel had collapsed and it was outside my body.

“If he had taken me in the car I would have ended up with a colostomy bag, because my bowel would have died.

“When I got there I had to wait for four hours to see a surgeon.

“I was there screaming in pain, I can’t describe it. All the nerves are open and no painkiller was taking the pain away.” 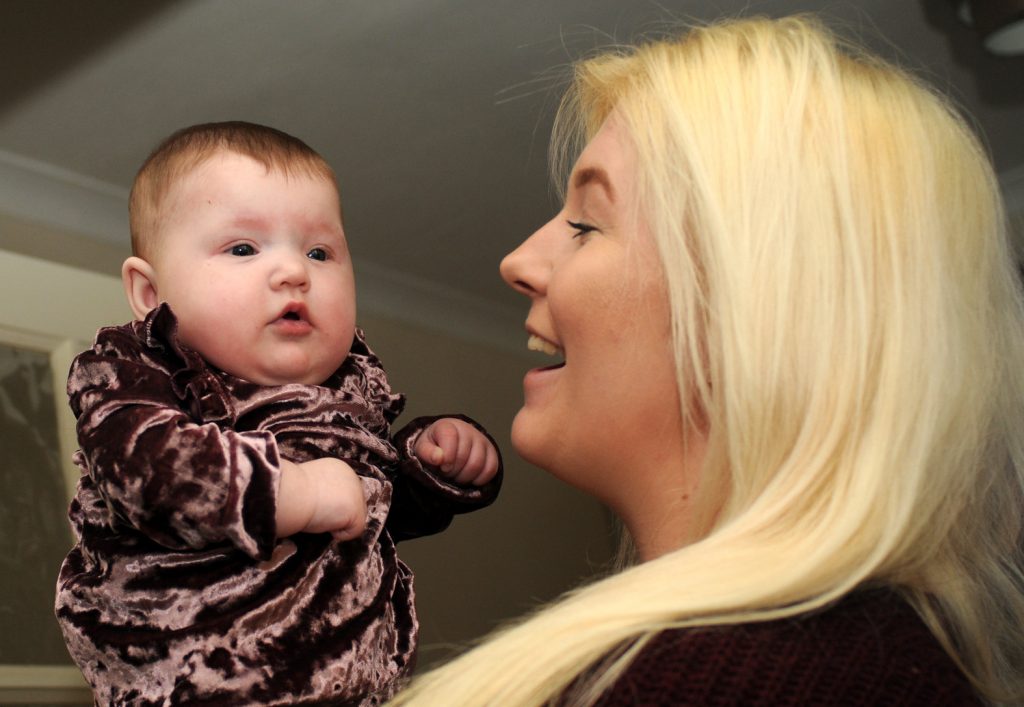 Ms Maynard who is from Bolton, Lancs., then had to endure “indescribable pain” for hours as she waited to see a surgeon.

She said: “I feel miserable, just miserable, the pain they have left me in is indescribable.”

Ms Maynard explained she has been left “disfigured and in constant pain” after her “vile” scar was not correctly stitched up after the birth.

She said: “I have got a scar like you would not believe, it’s disgusting because it’s been opened three times, it’s vile.

“It’s permanent damage – all because my perineum wall wasn’t sewn.

“I know there are complications to a procedure but your bowel coming out of your body is not a complication of a C-section – it’ s unheard of, it never happens.

“Scars can open up, that’s fine, but my bowel was moving around inside me and pushed its way out of the opening.”

Ms Maynard says she will now constantly feel conscious about her body and her “Frankenstein” scar following the operation.

She said: “When you have a C-section the scar is supposed to be a tiny straight line. Mine looks like Frankenstein has got hold of it, it looks like a smiley face.

“It’s a mess. I will probably never go abroad because of my stomach.”

The Royal Bolton Hospital has now launched an investigation, with Ms Maynard attending a meeting with hospital bosses and Patient Advice and Liaison Service (PALS).

However, a recording that she informed was being made of the conversation was not successful.

She also claims has not received a written report which the hospital says it has sent to her.

She added: “I’m just getting fobbed off – for this to happen to me is not right.”

A spokesman for Bolton NHS Foundation Trust said: “We are sorry that Ms Maynard is in this situation when she should be enjoying her new baby.

“We can assure her that the only reason the tape recording of our meeting with her was not available was because it did not record properly due to a technical issue. This has been rectified.

“However, we did write to her with a detailed account of the meeting. We are making contact with Ms Maynard to arrange a further meeting to answer her questions relating to her care.

“We recognise that her treatment was not as she would have hoped, and apologise for the upset and distress this has caused.”