A mum was reunited with the ‘white van man’ who she says saved her baby’s life, after she flagged him down in the street when an ambulance failed to turn up.

Amy Thomas, 27, feared her five-week-old baby Leo was going to die when he suddenly stopped breathing and went floppy.

The frightened mum told a call handler: ‘I need an ambulance now. He’s not breathing, I need one now’ – but had to rely on the kindness of strangers to help her out after being told there were no ambulances available.

When none of her neighbours were in she spotted a driver, Brett Garvey, 42, sitting behind the wheel of his white van and banged on the window to get his attention.

Mum-of-two Amy said: “Leo was fine all morning but he wouldn’t feed.

“I remember I thought he might be a bit sleepy, so I did his nappy and I was going to put him down when he started to lose his colour.

“It happened so quickly. He went floppy, he was taking really small breaths and holding them.

“I phoned the ambulance – I remember saying ‘I need an ambulance now. He’s not breathing, I need one now’.

“The call handler said he didn’t know. I said ‘that’s not good enough’.

Amy claims she was told by a call handler at South Western Ambulance Service that no vehicle was available, but he said he would get one to her as soon as possible.

Instead, van driver Brett urged Amy to get in the passenger seat and drove to Weston General Hospital in Weston-Super-Mare, North Somerset.

Brett said: “I’d just pulled up and I saw Amy running around – she had the baby with her.

“I didn’t think anything of it, I went to sort out the dog and then I heard a knock on the window.

“I said ‘what’s going on’ and she said she needed a lift. She said the baby wasn’t breathing.

“The van had been playing up lately – I was worried it wouldn’t start but it was alright.

“I’ll never forget it. The baby wasn’t breathing for the first part of the journey. I thought he was gone.

“But she gave him a bit of a rub and he started breathing again – and just then, the sun came out.

By the time they had reached the hospital, and 40 minutes after dialling 999, Amy received a voicemail message telling her an ambulance had arrived at her house.

She said: “I’ve got no faith in the ambulance service now.

“It’s horrendous. Now I’m scared something else will happen and they won’t get to me in time.

“I’ve never had to call an ambulance before but after this, I honestly think I’d be better off getting someone to drive me.”

Baby Leo had turned blue and his breathing was erratic, sometimes stopping for up to 40 seconds.

He was diagnosed with severe apnoea, and was rushed to Bristol Children’s Hospital where after being sent home once and re-admitted, he was found to have pneumonia and a partially collapsed right lung.

Leo was in hospital for three weeks and has now made a full recovery.

Amy said: “It was horrendous I thought he was going to die.

“Leo dropped below his birth weight in hospital, but he’s putting on weight and he’s looking so much brighter and he’s smiling and happy.

After dropping Amy and Leo off at the hospital, Brett could not stop wondering about whether the baby had recovered.

But Amy posted a message on a local Facebook group in the hope of tracking him down to say thank you. 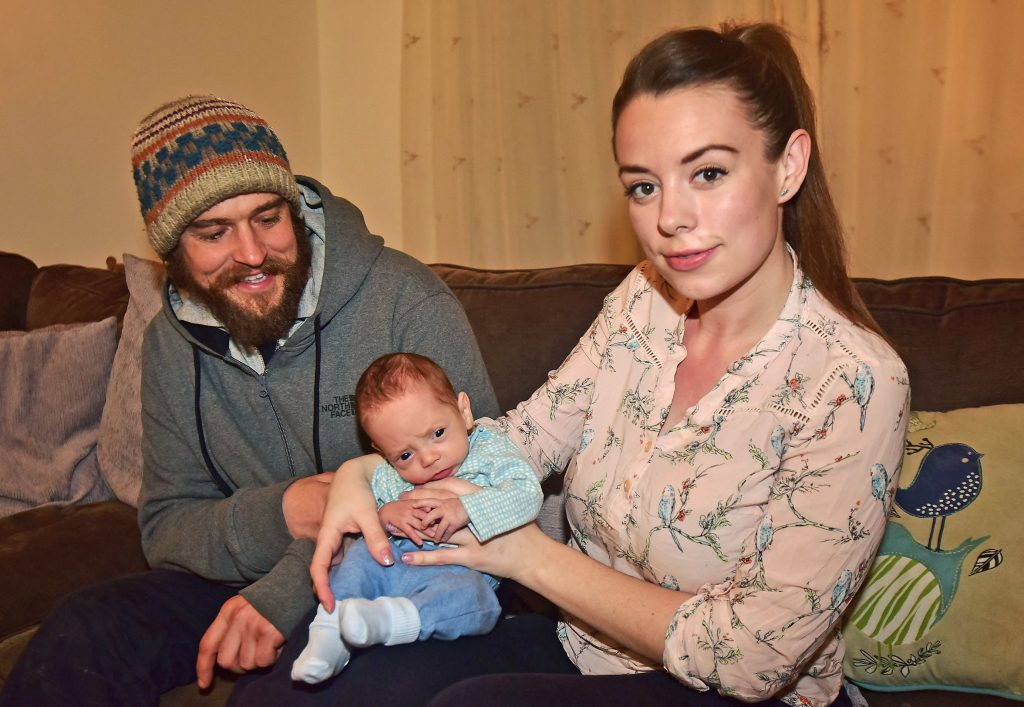 Brett said: “Bless her, she remembered me – she took the time to find me.

“At a time like that, with all that stress, she took the time to think about the white van man.

“It was just ‘right place, right time’, most people would have done the same.

“I’m glad she got in touch though – it would have been at the back on my mind for the rest of my life.”

Amy, who has another son, Noah, aged four, with partner Paul Marquiss, was able to say thank you in person to Brett when they met up after in less stressful circumstances.

A spokesman from the South Western Ambulance Service NHS Foundation Trust said that Amy had been in touch and her complaint was being investigated but no comment would be made until the inquiry was finished.