A mum has become the first woman in the UK to have a double hand transplant – and says she can’t wait to brush her daughters’ hair again.

Tania Jackson, 42, underwent the incredible 15-hour procedure in September after she lost both hands and her left arm to sepsis.

Brave Tania was convinced she would have to use prosthetics for the rest of her life.

But while still recovering in hospital she spotted a programme on television about the first woman to be placed on the hand transplant register.

She put herself forward and was chosen to begin the pioneering process at Leeds General Infirmary.

Mum-of-three Tania now has a new arm and two new hands and says she can’t wait to brush her daughters’ hair again – and hold their hands. 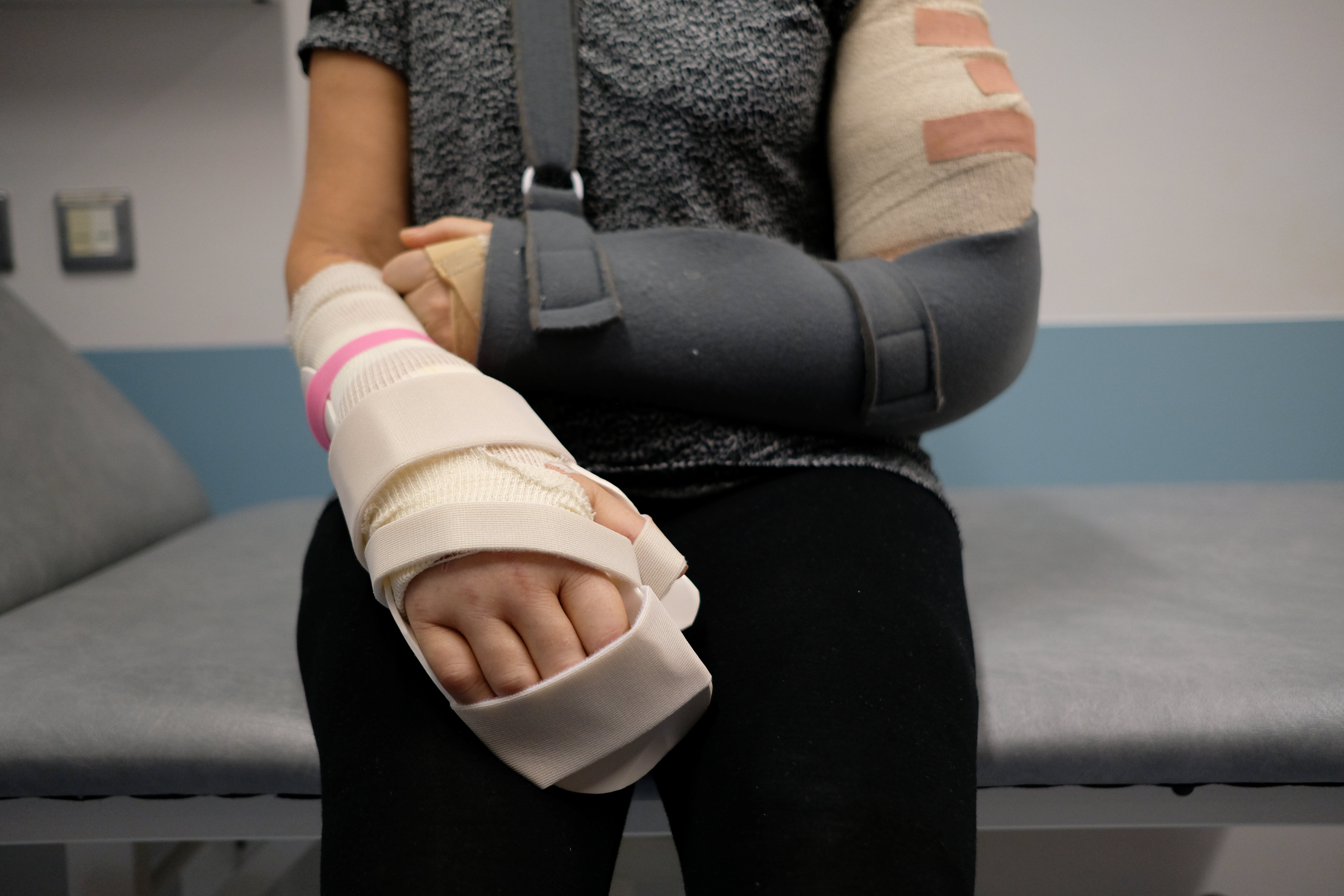 She has now revealed her story along with John-Paul McGrail, 36, who also received a new arm and hand in another pioneering surgery.

John-Paul, a sales adviser from Manchester, lost his right arm in a road-traffic accident in March 2006.

In early 2016, he was at work when a customer who he had never met suggested he contact Leeds General Infirmary’s hand-transplant team.

Now both John and Tania, who worked as a beauty therapist, are excited to return to “normality” and be able to regain their independence.

Tania said: “I have all sort of emotions. It was such a major breakthrough [to have the surgery].

“I can’t wait to get my life back again and be independent.

“It is just the normal things I am looking forward to most, being able to brush my daughters’ hair and hold their hands.

“I am so excited for the future.”

Speaking about his feelings about the future, John-Paul described it as an “unbelievable feeling”.

He said: “Until I was in hospital and ready for the operation it hadn’t really dawned on me what was happening.

“I have got my confidence back and I am excited.”

John-Paul lost his hand as a result of a car accident and Tania suffered the loss of multiple limbs when a long-term condition she has suffered from since her 20s, ulcerative colitis, became worse in the early months of 2015.

Ulcerative colitis is where the colon can become inflamed and, in March 2015, on the back of complications of the condition Tania contracted sepsis after her blood became infected.

Tania, from Hull, East Yorks., said: “I felt really ill and was being sick when I was helping a friend out at her workplace.

“I became more uncomfortable and my stomach bloated to the point I felt six months pregnant.

“A few days later I could barely move and rang 111 where they told me to come in.”

After being rushed to hospital by her husband Andrew, 40, he was given the devastating news that her chances of survival were very low.

Andrew said: “Her limbs had started to turn black.

“They told me she had sepsis and I didn’t know whether she was going to live or die.”

Tania lost three quarters of her left arm, her left hand, her right hand apart from a small section of thumb and her toes as the deadly disease took over her body.

Tania said: “They wanted to hang on and save as much as they could.

“There were parts of my fingers that were alright but the whole of my right hand was black and shrivelled. It was making me ill so they had to operate.”

The mother-of-three courageously fought the condition in intensive care and underwent after-care for three months following the amputation operation which saved her life.

While in hospital, Tania saw a television program about Corinne Hutton – the first woman to be placed on the hand-transplant register. 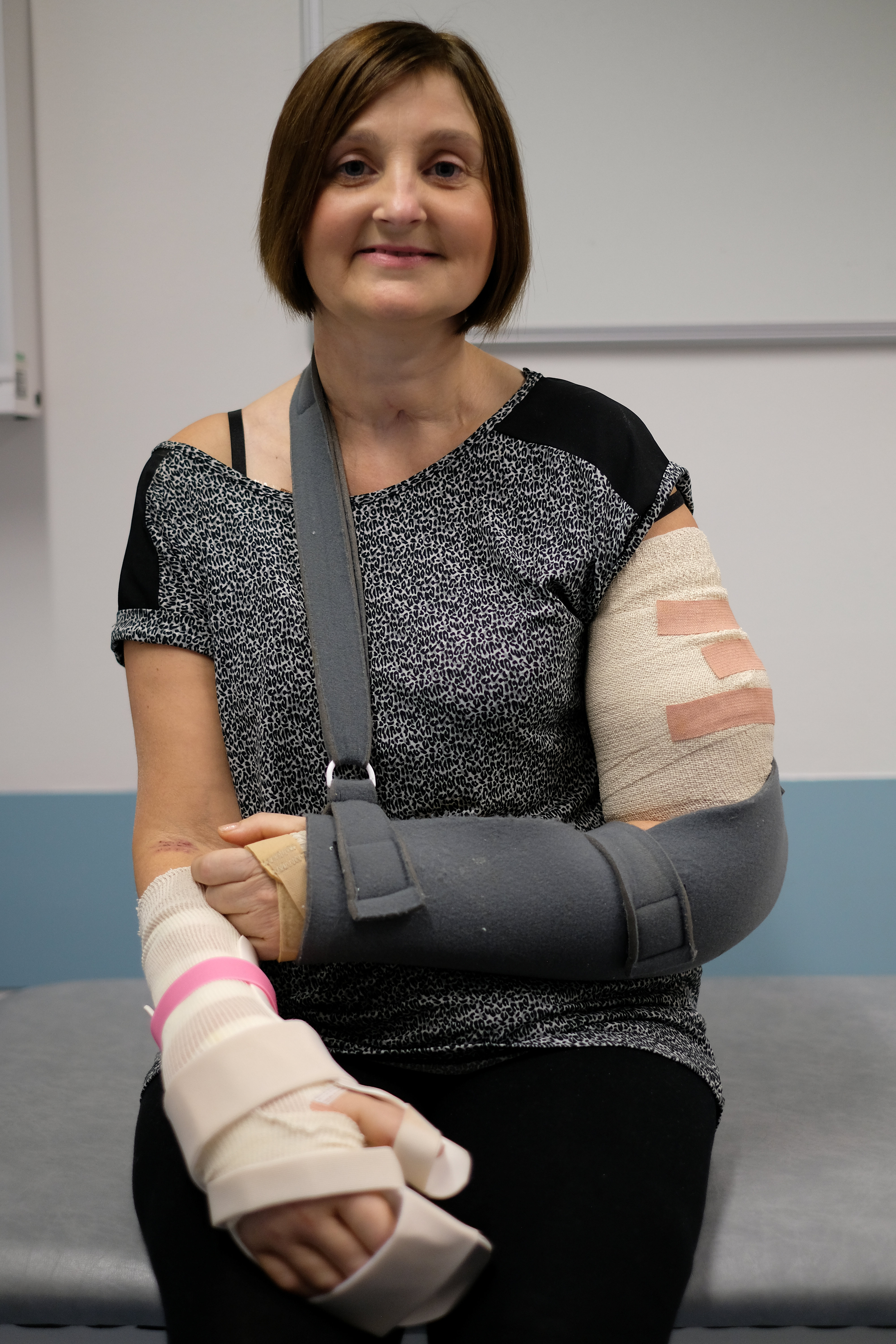 Much to her astonishment, Tania discovered the procedure could be carried out at Leeds General Infirmary by a specialist team – the only unit in the UK.

Tania was referred to the unit and put onto the waiting list in early 2016.

She anxiously waited for a successful donor to become available while she wore prosthesis – until last month when she was given the incredible call that the limbs were available.

Just a day later, Tania endured a 15-hour operation to give her a new left arm and hand and right hand.

During the same time, John-Paul was referred by his doctor to the LGI team and became an outpatient in May 2016 before being placed on the donation waiting list.

After an agonising two-year wait and two chances for surgery which fell through, John-Paul got the call that a limb was available and was rushed to the unit for the operation.

The courageous pair are hoping to regain full function of their limbs within the next two years.

Tania said: “It is just the little things that you take for granted [which I can do again].

“Getting your money out of your purse. The little things.”

John added: “I haven’t told very many people about the surgery. After I lost my arm people would sometimes stare.

“I have got my confidence back and I am excited.”

Speaking of his chance encounter with the man who told him about the surgery, John-Paul added: “I was working in the phone shop one day when a guy came up to me and said ‘I hope you don’t mind me asking what happened to your arm’.

“I told him and he told me about the transplant team at the LGI. I had no idea it was possible, I couldn’t believe it.”

Consultant plastic surgeon, Professor Simon Kay, who has carried out the astonishing procedure on five patients, said he believes the operations will become more common as more patients recover.

Professor Kay, who has worked at the LGI for 32 years, said: “We had the technology to carry out the procedure thirty years ago but nobody thought the drugs would prevent rejection [of the hand] from the arm.

“We thought it was impossible.

“We now have what I believe is one of the top three units [to carry out the procedures] in the world.

“I am enormously proud of everyone and I have a privilege to lead the team of 30 people.

“No transplants are possible without the courage of the patients who donate.

“If you want to find the real heroes look at them, they are amazing people.”