Charlotte Debieux who was struck down with Guillain Barré Syndrome. She is seen here before she was stricken with the disease.

A mum who was asked if she was drunk at the school gates discovered her stumbling was caused by a hidden rare illness – which left her paralysed in just weeks.

Charlotte Debieux, 25, was mortified to be asked if she had been boozing when she collected her daughter Poppy, three, and found herself feeling unsteady on her feet.

A month after the onset of symptoms including numbness and back pain, she was diagnosed with Guillain Barré Syndrome – which affects one in a million people.

The mother-of-one was alarmed at the loss of sensation, but it rapidly spread throughout her body and she spent a month suffering from a bad back.

Medics were baffled by Charlotte’s condition, and thought she might be suffering from early onset Multiple Sclerosis (MS).

But an MRI scan ruled MS out, and in September 2017 Charlotte was diagnosed with autoimmune condition Guillain Barré Syndrome, which attacks the nerves, using a lumbar puncture.

After a month in hospital, during which time her body was paralysed by the neurological condition, Charlotte was finally able to move her feet – and urged her mum to catch the moment on camera in a sweet home video.

Single mum Charlotte was admitted to University Hospital Southampton, and Poppy moved in permanently with her grandmother, Michelle Debieux, 44.

Charlotte said: “I’d been walking around for weeks, looking drunk. I was finding it hard to walk because my feet felt numb.

“My daughter’s school was asking if I’d been drinking, and I was mortified. That was the point where I realised something was seriously wrong.

“After managing to stumble home I did cry, I was worried that I’d have social services or the police round.

“Another time, I’d been watching The Kardashians, and I went to the toilet and wiped from front to back after having a wee and felt a lack of sensation.

“Doctors thought I might have MS, as my condition usually starts in your feet and works its way up, and effects much older people.”

At the time she became ill, Charlotte had been busy building a new life for herself and her daughter and was hoping to join the Army.

But her life was turned upside down as she rapidly lost her co-ordination – eventually descending into paralysis.

Medics believe the autoimmune condition can be brought on by an infection as common as food poisoning or flu.

Charlotte said: “The illness changes your life and not for the better.

“I was suffering from paralysis so much that I didn’t need to have pain relief or an epidural.”

She first became ill in August 2017 and suffered from numbness in her genital area, which spread to her hands and feet as a feeling similar to pins and needles set in.

Soon it affected she began to experience agonising back pain and difficulty swallowing.

She was admitted to hospital regularly but in September 2017 her condition deteriorated.

“By the time my mum got to hospital I couldn’t walk,” Charlotte said. “In my private area, I couldn’t feel anything.

“My feet and hands felt like pins and needles.

“My back pain was ridiculous.”

After spending a month in hospital in Southampton, Charlotte was given intravenous immunoglobulin (IVIG), using donated blood, directly into a vein during a transfusion which took five days.

Charlotte added: “My arms and legs were completely lifeless for about eight days. I could move my right leg after four days of receiving my IVIG, as well as my left arm, and I could squeeze my hands.”

She was discharged from the neurological ward in October 2017 and was told she would need physical and occupational therapy as part of her recovery.

“I slowly got stronger day by day and had physio,” Charlotte said.

“I started to use a Zimmer frame and finally had the catheter removed, but I was using bedpans until I was strong enough to use the walker alone, then finally holding onto someone’s arm.”

She moved to Gloucester, Glos, to be close to her mum and daughter, but in the weeks after she was discharged, her mother Michelle had to lift her 6 ft 3 daughter out of the bath.

Charlotte said: “Mum was going to have to care for me, and for my daughter.

“She’s been run ragged. She’s bringing up my daughter, and she’s had to give up her job to look after us.”

The illness left Charlotte with droopy facial muscles that she says make her resemble someone who has had a stroke.

She has to use a mobility scooter to go out into town, and uses a wheelchair and bath lift at the home she shares with a close friend. 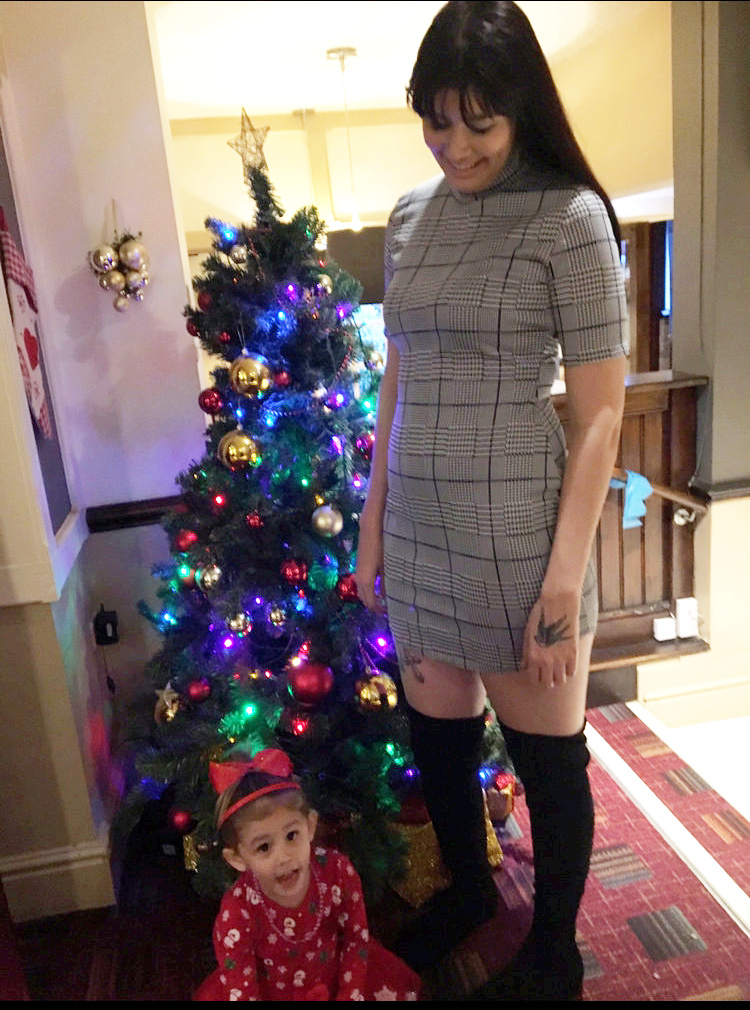 Charlotte said: “I couldn’t feel my feet, but I could feel my leg from my knee downwards.
“I managed to squeeze my hands but I had no strength.

“My brain had started to shut down my ability to swallow.”

She lives in hope that she will make a recovery, even if it takes three years as it does for some patients.

Every day she takes 40 tablets and suffers from fatigue that sometimes leaves her so tired she cannot get out of bed.

“I have a lot of feeling now, but I just can’t walk some days. Sometimes I lose feeling in my toes and fingers,” Charlotte said.

“I’m not strong at all so I’m working on the muscles I need most. I still need help bathing.

She added: “I just want to be able to pick my daughter up and swing her around in the summer.”

“If I did that now I’d have to sleep for two hours afterwards.”

“I want to be able to push her on the swings.”