The snow covered car in Harlow, Essex which was pulled over by police.

A motorist has been reported for careless driving after clearing only a small gap in their snow-covered windscreen.

The driver could see through less than half of the windscreen after only wiping the glass in front of their seat.

Traffic cops pulled over the offending vehicle in Harlow, Essex, shortly before midnight on Sunday. 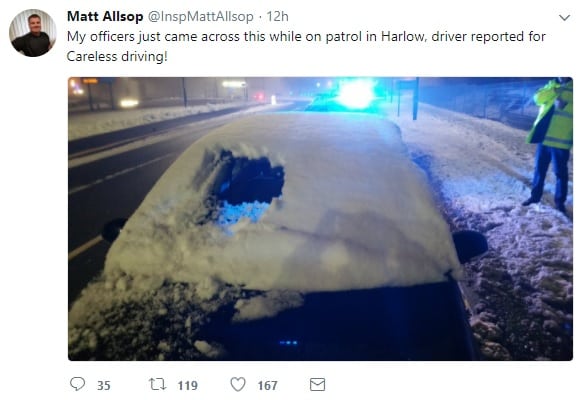 The snow covered car in Harlow, Essex which was pulled over by police.

In a tweet, Insp Matt Allsop wrote: “My officers just came across this while on patrol in Harlow, driver reported for Careless driving!”

He also posted a picture of the snow-covered vehicle.

Parts of Essex saw up to 10cm (4in) of snow on Sunday, leading to road closures and travel problems across the county.

On Monday, more than 50 Essex schools were closed due to the weather.