Jake a clever Highland Cow who can turn on a tap using his horns at Mossburn Farm, Dumfries and Galloway.

This is the funny video of a clever bullock who was feeling the heat but managed to find a way to cool itself down – by turning a TAP on.

Siobhan Webster was taking a walk around the outdoor arena at Mossburn Farm until she heard the tap outside the centre go on last week (Thurs) at 12pm.

The 27-year-old rushed to turn it off but the third time it happened she noticed dehorned highland bullock, Jake, kept using his head to turn it on.

That was the moment Siobhan, from Dumfries and Galloway, took out her camera to video the amusing moment of the four-year-old cow attempting to drink the water.

The yard-keeper, from Mossburn Farm, Lockerbie, Dumfries and Galloway, says “it was quite funny”.

Siobhan said: “I heard the tap go on the first time and I turned it off.

“Then the second time the same thing happened and I noticed Jake had done it. But when he went to do it for the third time that’s when I took out my camera to video it.

“It was quite funny, he didn’t really want to drink it but I guess he wanted to cool himself down.

“When I turned it off for the third time he didn’t put it back on. I guess he must have cooled down.”

Juanita Wilson, centre manager of Mossburn Farm, says she did not know that Jake knew “how to turn the tap on”. 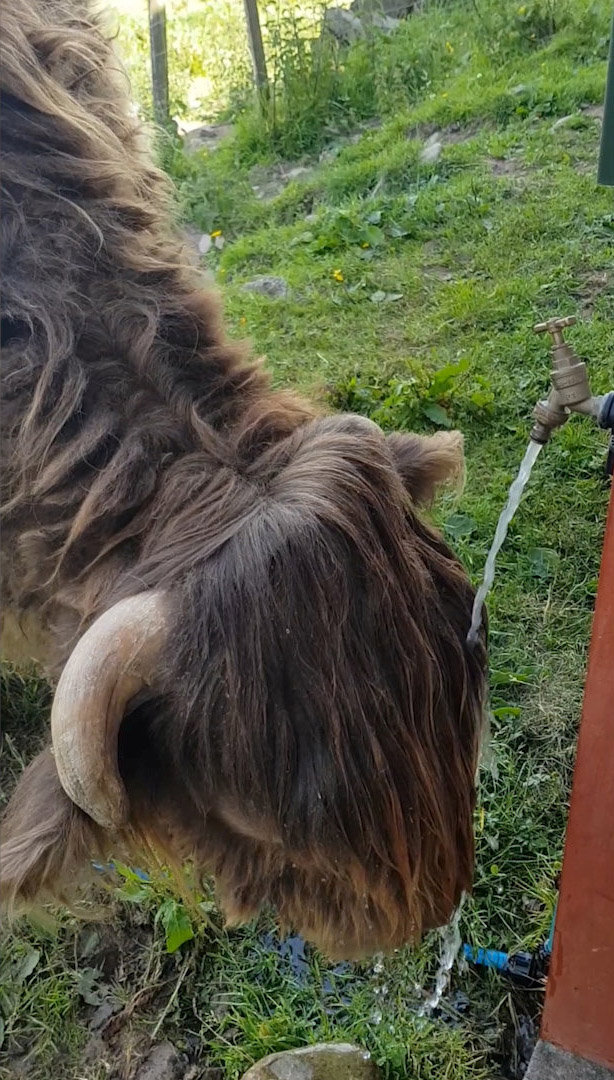 She said: “His a dehorned highland bullock and he was born in 2014 so his 4-years-old.

“He lives with his brother. His brother’s companion was taken away. Jake is a herd animal, so they like to live with their own kind.

“I think his very clever, it wasn’t accidental that he turned the tap on. He walked straight to it and knew what he wanted to do. A pig didn’t manage to turn it on but Jake did.

“Here at our farm we take in misused, abused, neglected and unwanted animals. We are a charity.

“I think if Jake wasn’t here he would have been on a plate as a piece of beef. But his a living piece of beef now.”