Naomi, 3 with her huggable daddy toy.

A military wife is helping her daughter cope when her dad is away – with a special cuddly toy with his face on.

Mum Natasha Balfe says the personalised doll designed to look like her partner helps both of them deal with his absence.

Natasha developed a rare psychological condition after giving birth to baby girl Naomi, and struggled with caring for her when husband and RAF airman Jack was away.

But the 25-year-old said the ‘Huggable Heroes’ helps them cope with missing him when he isn’t home.

Natasha, from Norfolk, said: “I had an emergency caesarean section. Within 24 hours of having her I knew something wasn’t right.

“When we went home I still didn’t feel 100 per cent but it wasn’t until around the six week mark that I went to see the doctor.”

The young mum went to see a psychiatrist and was diagnosed with postpartum psychosis.

According to the NHS, postpartum psychosis is a rare but serious mental health illness that can affect a woman soon after she has a baby.

The symptoms can include hallucinations, delusions and extreme mood swings. 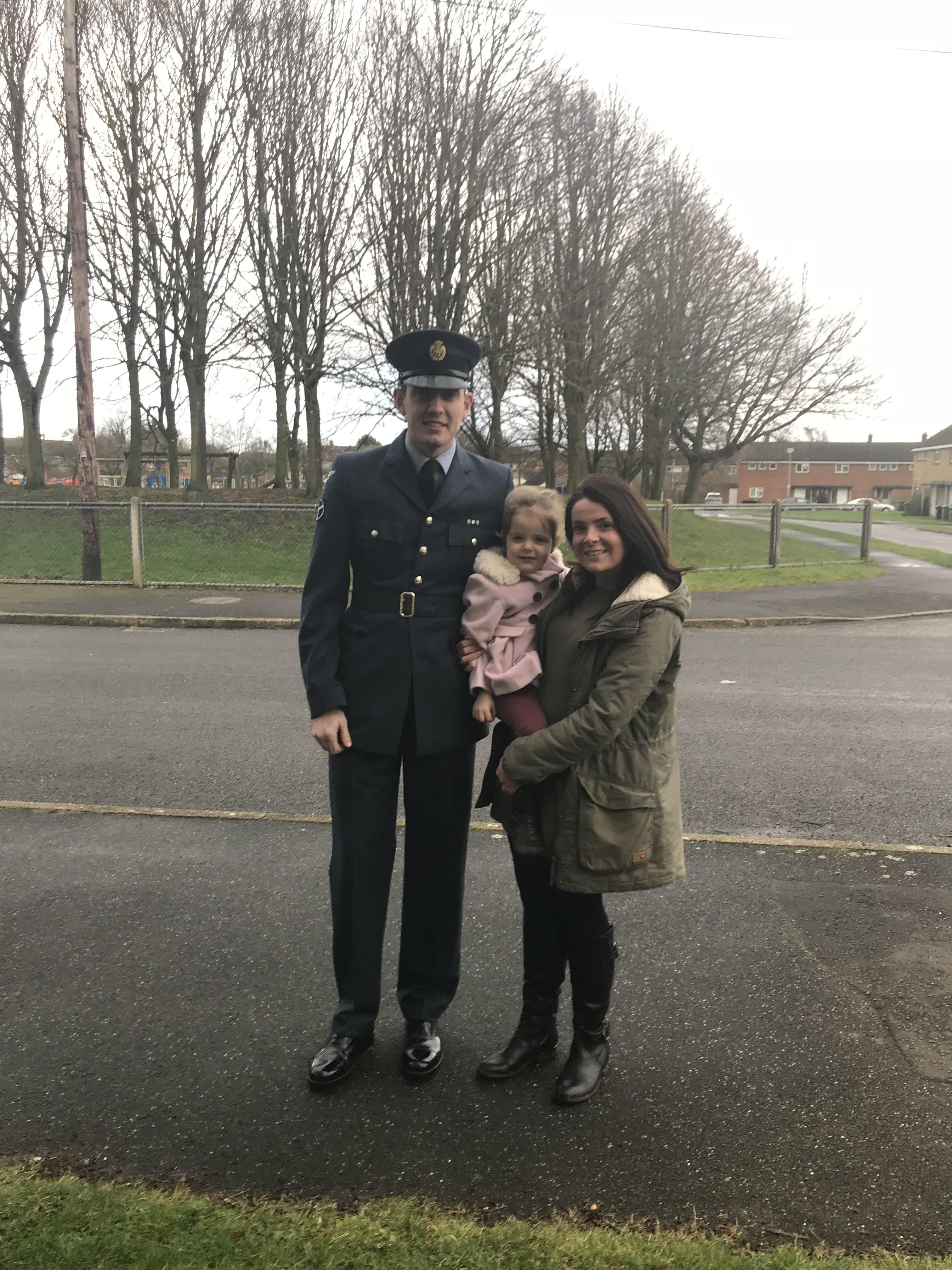 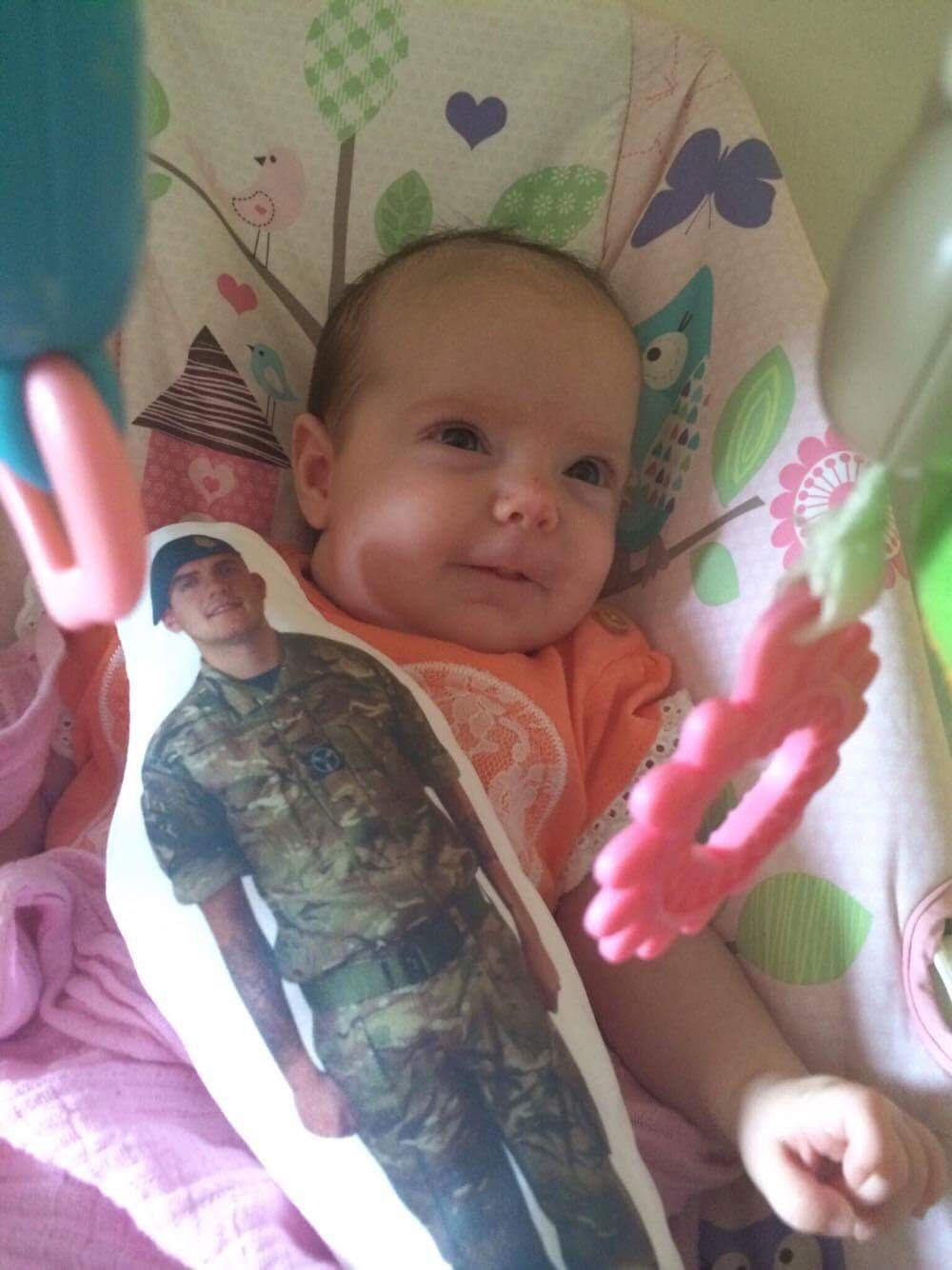 Natasha was prescribed medication, which she said didn’t help deal with the condition.

She said: “Postpartum psychosis is supposed to go between six to 12 months.

“In some aspects I was better then I was showing other mental health issues.”

After going back to the psychiatrist, she was also diagnosed with obsessive compulsive disorder and anxiety.

Natasha, an administrator at an estate agent, said: “I was worried that people would come and hurt Naomi. I was also hearing voices.”

Although she said the military was very supportive, senior aircraft technician Jack eventually had to return to work.

She added: “I really don’t know how I was going to cope on my own with her.
That’s when I found the Huggable Heroes.

”For me he could still be part of everyday life even though he was not there.”

The personalised cuddly toys are made by Jo Lomax, another military wife who started making them for her own children.

The stuffed dolls can have any image printed on them, and after finding the company on Facebook, Natasha decided to get one for Naomi with a picture of Jack on it.

She said: “”I still struggle to leave Naomi at nursery if she’s having a bad day but her being able to take the huggable hero has really helped.”

As well as taking the toy to nursery everyday, it accompanies three-year-old Naomi to bed at night, trips to the shops and even to swimming lessons.

Natasha said: “It just gives her a bit of confidence. She can just bring him along so he can join in.”

After three years off work, Natasha finally returned to her job in September after having cognitive behavioural therapy.

But she says the toy was a helpful factor in her recovery.

She said: “In the future when she starts school, I’m going to have one done of myself.”

Jo Lomax, said: “I am over the moon Tasha and Naomi have taken such comfort from having a Huggable Hero of Jack/Daddy.

“Helping Families struggling with separation for any cause is the whole reason behind Huggable Heroes.

“I am inspired daily by the battles families face. They are our inspiration, focus and drive to reach more families we could help, who are missing someone special from their daily lives.”