Meet the woman who drinks from a sippy cup, sucks a comforter and wears nappies – because she lives as An adult BABY

Meet the woman who drinks from a bottle, sucks a comforter at night and wears diapers - because she lives as an adult BABY

A woman who was sexually abused as a child claims she is ‘reclaiming her childhood’ – by dressing up as an ADULT BABY on Instagram.

Tori Hart, 18, drinks from a bottle, sucks a dummy, wears nappies, and loves to watch cartoons, throw temper tantrums and babble in baby-speak.

However, she claims to have no sexual interest in her role-playing and engagement with her 2,000-plus followers on Instagram @little_tori_baby.

The fast food restaurant worker claims she was sexually abused as a little girl and “never had a childhood”.

She has battled depression, anxiety and an eating disorder and says that regressing to infancy is soothing and allows her to reclaim her younger years.

Tori does not have a boyfriend or ‘daddy’ currently but has a ‘babysitter’ who occasionally plays the role of a parent, changing her diaper and bossing her around.

He doles out punishments like making her write lines or sit in the corner as well as rewarding her with treats such as sweets or trips to the cinema.

Tori says she usually behaves like a three-year-old so is classified within the community as a ‘little’, but she can be anywhere between the ages of one and ten depending on what she needs to do that day.

Speaking openly about her lifestyle for the first time, Tori, who lives in southern Oregon in the US, said: “It allows me to reclaim my childhood.

“The whole idea is submitting yourself to somebody and giving them the power to be in charge of your wellbeing.

“I speak in my ‘baby voice’ and if I’m upset I will cry or have a temper tantrum. I also crawl and roll.

“I don’t have a parent at the moment so normally I do it by myself after work. I will dress in a onesie or outfit and relax and watch TV.

“I use my bottle and eat chicken nuggets shaped like dinosaurs as well as taking pictures for Instagram.

“I also go to bed every night with a pacifier and it helps me to sleep because I have insomnia. One night I went to a friends’ house and I couldn’t sleep without it.

“I wear diapers and I do go to the bathroom in them, but only number one.

“There are some people who do more but that’s not for me. I don’t like that part of it – it just feels like too much. 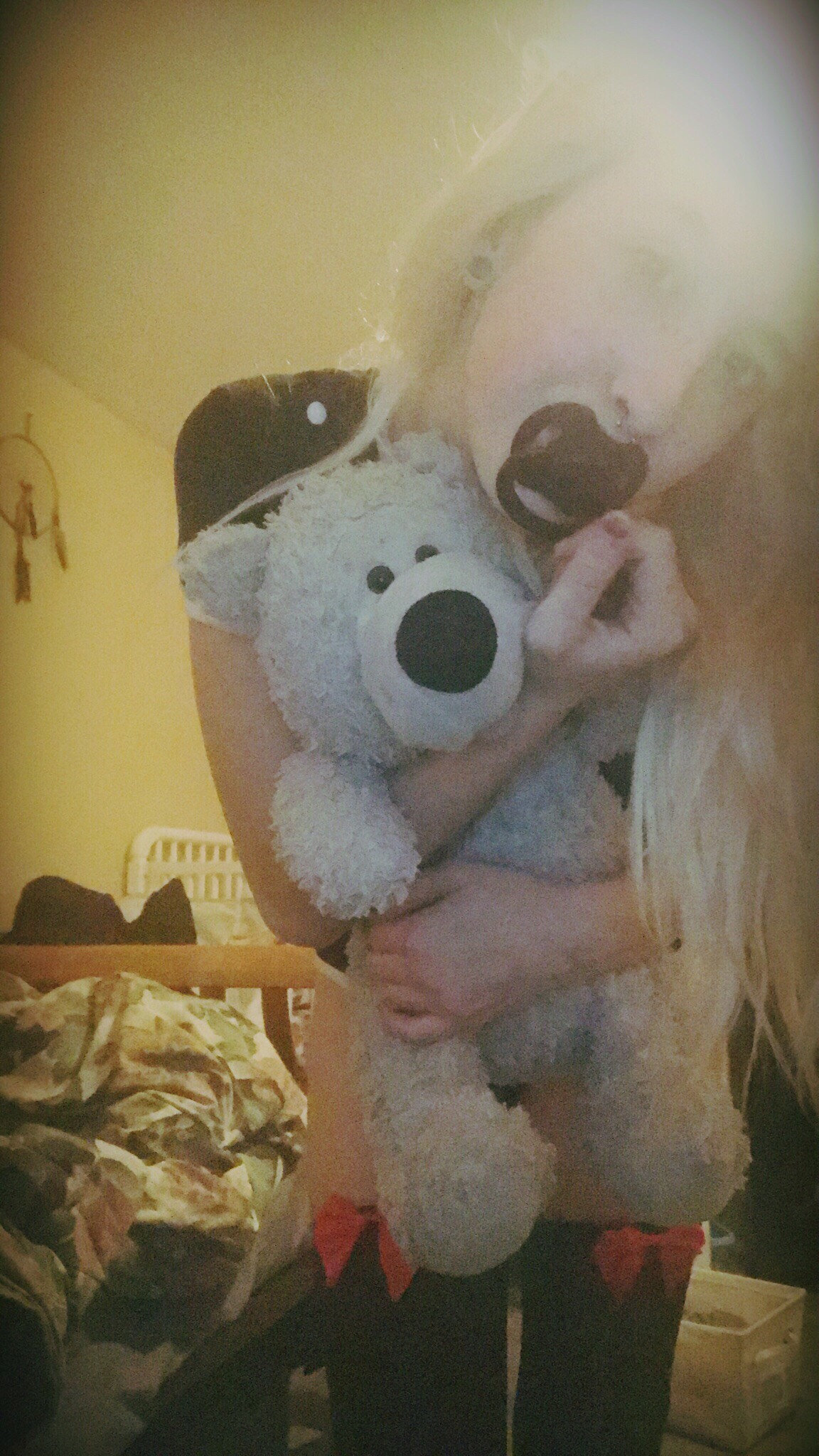 “It is very soothing and comforting. You feel very snug and like you are completely warm, content and happy. I forget about everything else in the world.

“When I am in that headspace I don’t do anything sexual. It definitely can be a sexual thing but I think of it as a way of expressing myself.

“It makes me feel like I get to go through my childhood again and I get to redo everything I didn’t get to do the first time around.”

She added: “I was diagnosed with anxiety and depression around four years ago and I used to take different medications but nothing was helping. I felt like a zombie.

“Then I found the community and the people I love and the thing I love to do. I ended up giving up all the meds.

“It has made me stronger, more confident and happier.”

Tori was introduced to the baby play community by a friend and says her first experience was calling her boyfriend ‘daddy’.

She then discovered a YouTuber who also lives as an adult baby so decided to try the lifestyle for herself – and loved it.

She estimates she has spent a few hundred dollars on outfits, diapers and toys since then, including onesies which she wears with shorts in public.

Tori, who lives at her mum’s house, added that her friends and family have been supportive of her lifestyle choice.

She said: “One time my mom found a diaper so we talked about it. She said, ‘That’s fine, just make sure you clean up after yourself.’

“I was worried at the beginning about what people would think. There are a lot of misconceptions and the biggest is that it is pedophilia.

“People say it is weird and gross and that it is not right. A lot of people judge and assume the worst.

“Despite the stereotypes and the stigma that we are creepy pedophiles, we are not. If you get to know us, we are nice, normal people.

“If you still don’t like or accept it, that is fine. But you don’t find me coming around saying, ‘You don’t do this, that is weird.’

“I’m just here living my life and doing what I love. I don’t deserve hate.”