Kaleb Staves, 3, of Hull, East Yorks., in hosital shortly before his major surgery.

A little boy whose tummy pain was dismissed by a walk-in-centre doctor as being trapped wind was later found to be suffering from a giant TUMOUR – the size of a tennis ball.

Kaleb Staves has kept a “smile on his face” despite four cycles of chemotherapy and surgeons having to remove what they described as the biggest tumour they had ever seen on July 4.

The 2kg cancerous tumour had pushed Kaleb’s organs out of place including his liver which at one point was pressed against his heart after moving four inches.

His parents first noticed something was wrong when the toddler refused to eat even though he’d previously had a healthy appetite.

Then, everytime Kaleb was moved or lifted at home he cried like he was in pain and that’s when his family discovered his abdomen was blown out and distended.

His mum Susan Moses, 39, from Hull, East Yorks., immediately took him to a walk-in centre, where a doctor put it down to trapped wind on May 21 this year.

She wasn’t convinced by the diagnosis but took the word of the health professional because “she didn’t know any better”.

But the next day, the youngster was found covered in blood by his parents who had gone to check on him before bedtime and to give him some Calpol.

Susan, who works in retail, took her son to her GP who immediately referred him to A&E for an ultrasound — 48 hours after Kaleb first became unwell.

However, results showed the little boy had stage one Wilm’s tumour on his right kidney – which affects 80 children a year – and the youngster was rushed to a specialist unit at Leeds General Infirmary.

Susan said: “I couldn’t catch my breath – you hear cancer and think of death, it was absolutely terrifying.

“Knowing that your child has cancer, you don’t cope, just adapt and power through it to be brave for them – you don’t ever fully get over it and feel such turmoil inside.

“I was nipping myself and felt like I was in a dream, I didn’t think it was real. When reality kicks in it’s just devastation.

“You grieve and then it sinks in what your two-year-old will have to actually fight.”

Despite showing no telltale signs, the tumour had pushed Kaleb’s organs out of place and his liver was pressed against his heart.

His dad Karl Staves, 38, who works in manufacturing, said: “It took up all the spare space in his stomach cavity which put pressure on all his organs.

“The 48 hours from being told it was trapped wind to being a tumour, it‘s a sense of disbelief. In your head, you are already buying the headstone.

“You’re talking about a young kid, as an adult, you feel absolutely useless and put your faith in strangers who then become familiar faces.

“It’s only been nine weeks but you feel like you are aging in dog years.”

Kaleb has endured four intensive rounds of chemotherapy and eight stays in hospital as well as 18 days in Leeds due to the chemotherapy badly affecting his liver. 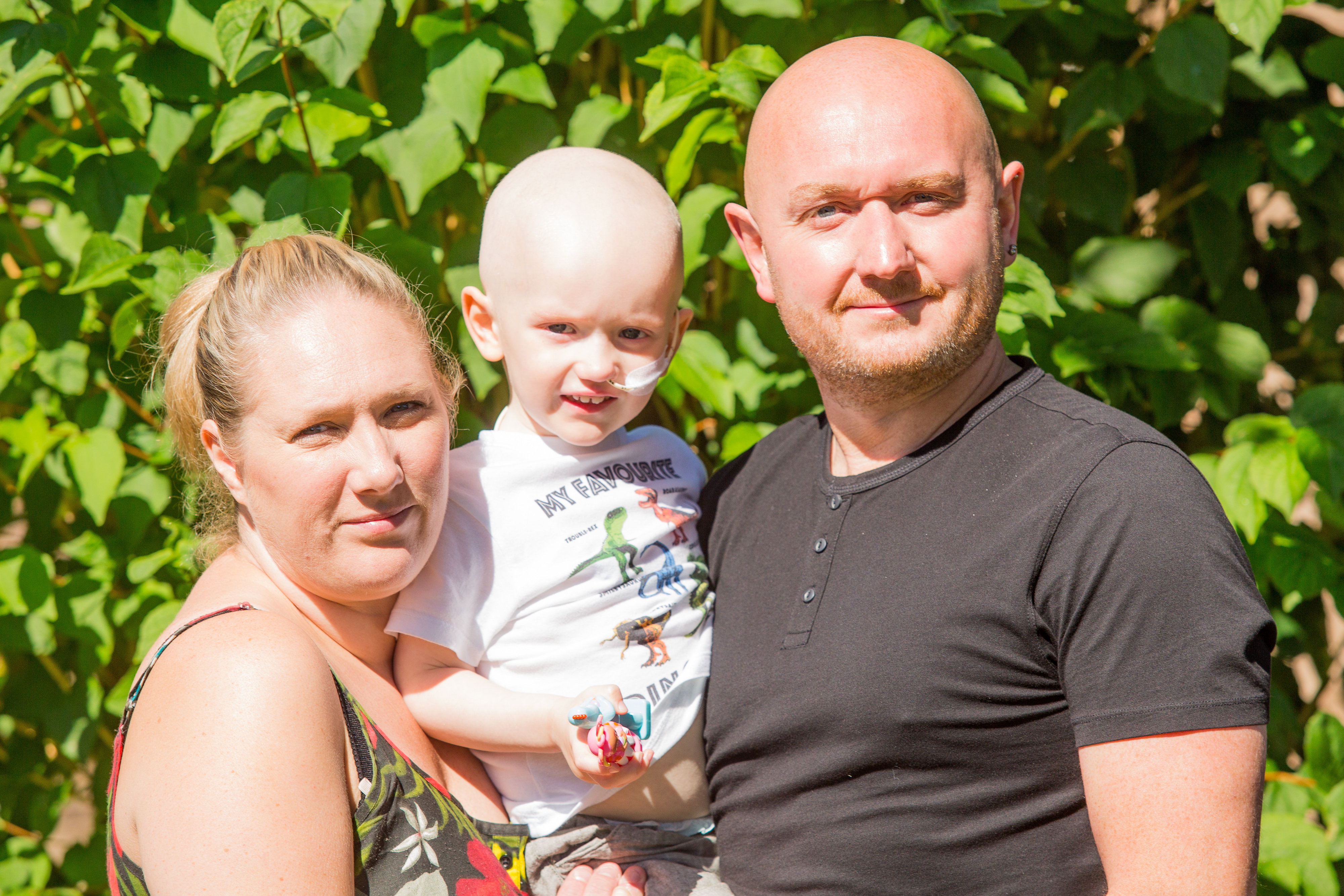 He will have his last round of chemo on Friday this week and will then have ultrasounds and possibly MRI scans for up to the next five years.

Kaleb has been fitted with an NG tube and he couldn’t walk when he first came out of hospital because his muscle mass had deteriorated after being bedridden.

But despite all he has been through, Kaleb’s parents say he still has a smile on his face.

“Kaleb is a little superstar and I don’t know where he found his strength of will, as what he’s gone through must have been so scary for him, added Susan.

“He is such a brave boy and we are so glad that he has a good prognosis – he deserves a medal for what he has gone through.”