Conor Hickinbottom, 22, who has shed almost half of his body weight after being inspired by old Arnold Schwarznegger films.

An obese warehouse worker who tipped the scales at 20 stone has transformed into a top bodybuilder – after being inspired by Arnold Schwarzenegger movies.

Conor Hickinbottom, 22, weighed the same as a baby elephant after years of scoffing pizza, chicken nuggets, chips and chocolate washed down with full-fat coke.

He was so big he was left with no confidence and he had barely enough energy to walk upstairs.

But he decided to take drastic action after becoming hooked on Arnold Schwarzenegger films.

The first movie he watched was the 1988 comedy Twins, also starring Danny DeVito, before he moved onto the Terminator films.

Within a year, Conor joined a gym, cut out the unhealthy foods and created his own diet plan consiting of chicken, fish, pasta and rice and vegetables.

Conor, of Leicester, has now transformed into a top bodybuilder and finished third in the Pure Elite contest last year.

He said: “If I could ever meet Arnie I’d say ‘thank you’. His films totally inspired me to stick to my diet and exercise routine.

“My dad’s boss was into bodybuilding and he told me about Arnold and other old school bodybuilders like Frank Zane.

“My favourite Arnold film is Twins – I’ve watched that quite a few times. I’ve also watched the Terminator films and Predator.

“Other than that I would watched his training videos. He’s the complete bodybuilder and has been a great inspiration to me.”

Conor now weighs a healthy 13 stone (82kg) and is training to become a professional personal trainer.

He said: “I’m determined to use my own experience to help other people get into shape and improve their lives.

“I was always big growing up and at the age of 13, I got even bigger.

“When I got to secondary school it got worse.

“I got into a comfort zone of eating, my portions increased and so did the snacks.

“I didn’t do any exercise, so that made things worse – I wasn’t burning off any of the
calories I was eating.

“I really struggled with my confidence – I struggled to talk to anyone.

“I was bullied in school about my weight – I took it on the chin but inside it really hurt and that effected my confidence.

“I was struggling badly with my confidence and hating myself and how I looked.

“I would never have touched vegetables back then – I don’t think I even tried to eat them.

“I didn’t really need to eat anything healthy when I had all that sugary stuff.

“When I left school I had no energy or confidence – I didn’t feel like leaving the house.

“I felt like if I went on a bus people would laugh and judge me because of my weight.

“I hated the way I looked.

“When I turned 17-years-old I decided to make a change and that’s when I was inspired by Arnold Schwarzenegger.

“I joined a gym and some of my mates at the time were personal trainers.

“I put together my own diet plan and increased my physical activity.

“Things started to change when I got a part-time job at a warehouse.

“I developed my own diet plan and in days off and free time I went to the gym. 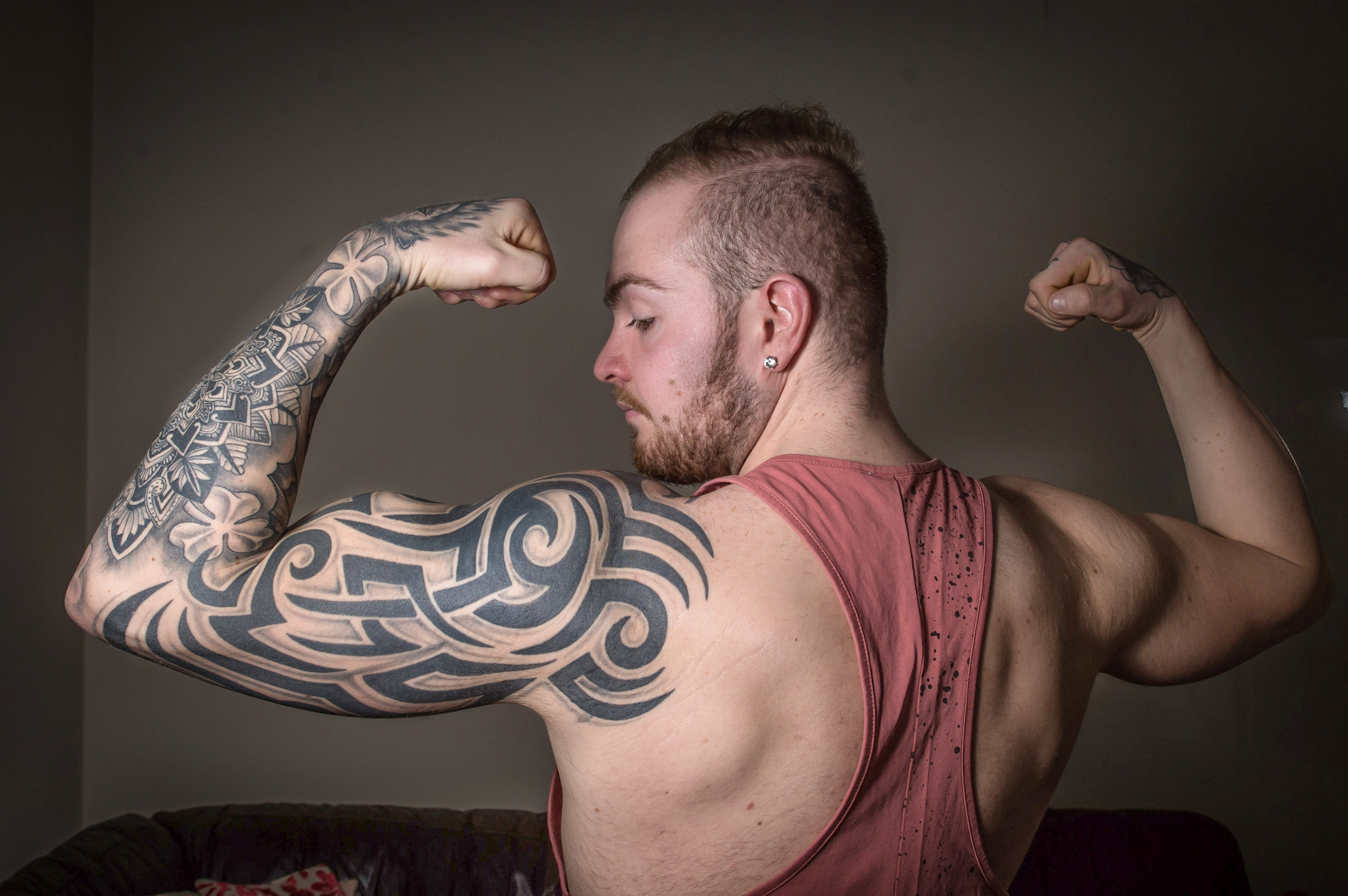 “I used to fast in the morning and train to before work and then do some session after work too.

“Whenever I get tired I just think of Arnie’s best quotes like ‘Hasta La Vista Baby’ and ‘I’ll be back’ and it just spurs me on.

“At the start I would go to the gym twice a week but now I go five times and spend three or four hours working out. I love it.

“When I started dieting I got down to about 11 stone which took me nine months.

“I was very strict and my calorie intake was low maintenance to help with weight loss.

“Once I got to that weight I decided I wanted to become a bodybuilder so actually bulked up again to 13 stone but it’s all muscle rather than fat.

“I started slowly seeing progress – my six pack was coming and other muscles were
growing like my biceps.

“So I kept pushing further for my progression.

“I entered my first bodybuilding competition in September 2017 – although I never won it really boosted my confidence.

“At the start of November last year – I entered the Pure Elite 2018 contest – I came third in the Male Model category and fourth in the Transformation category.

“The whole experience has been brilliant and now I’m doing my qualification to become a professional personal trainer.

“I just want to show people you can do this too.”