A man who ‘couldn’t draw basic shapes’ has told how he woke up in hospital after a stroke – with an incredible new talent for PAINTING.

Wayne Sheppard, 47, spends at least 10 hours-a-day creating quirky works of art and his home is stuffed with canvases which he has sold for up to £400-a-piece.

Once a “total clutz”, his stroke damaged the side of his brain associated with creativity, leaving him with a passion and talent for fine art he never had before.

Experts say brain damage caused by a stroke can “allow creative processes to flourish” – but to become so accomplished as quickly as Wayne was rare.

He finishes a new impressive artwork every couple of days, and credits his hobby with helping him face ill-health.

Wayne from Plumstead, South London said: “I remember waking up in hospital the next morning with this sudden urge to draw.

“I thought initially it was out of boredom.

“My girlfriend handed me her pad and I just started to swiggle on it.

“I started drawing this 4D pattern. I didn’t really know what I was doing but I felt like I needed to do it. I felt possessed.

“For the first three days out of hospital I just started sketching non-stop.

“I was never able to draw before.

“I even struggled to draw the basics, like a circle and a square.

“And now all of a sudden people are paying me to draw them.

“Most of the time I don’t know what I’m going to paint. As soon as I put my paintbrush to paper or canvas the pictures just come alive and before long there’s an image.”

Wayne was admitted to Guy’s Hospital, London, in December 2016 after a bout of nausea caused him to collapse at work.

It was caused by a stroke – but first a CT scan revealed a mass on Wayne’s left kidney along with smaller masses on his lungs, spleen and liver.

Hours later doctors diagnosed him with Stage 4 non-hodgkin lymphoma – a rare cancer of the blood and the immune system.

Then an MRI scan also showed a small cerebellar infarct – an obstruction of the blood supply causing tissue death – on the right side of Wayne’s brain, typically used for creativity.

He collapsed due to the stroke, and while it is not related to the cancer, the hospital admission and tests revealed the tumours.

“It was very overwhelming”, said Wayne, who worked as a hospital repairman before he became ill.

“I took some buccastem from a local chemist and hours later I collapsed during my shift.

“Before I knew it doctors handed me a cancer diagnosis and said I had suffered a stroke.

“I remember thinking ‘Is this going to be my last Christmas?’”

He woke up the day after the stroke in hospital and asked his then-girlfriend for paper to doodle on.

As soon as he got home he started sketching, before purchasing paints and canvases to work on more elaborate works.

Wayne used his new hobby as a means of coping with his devastating diagnosis but occasionally sells his artwork online and at markets, for between £30 and £400.

“When I was in hospital I was sketching random patterns but when I got home I wanted to do something more focused,” he said.

“I was distraught but I still had this urge to sketch and paint.

“When I really get stuck into a canvas piece I paint for two to three days constantly.

“I do it for at least ten hours a day.

“My style is rather unique. I like painting things unusual colours acrylics. 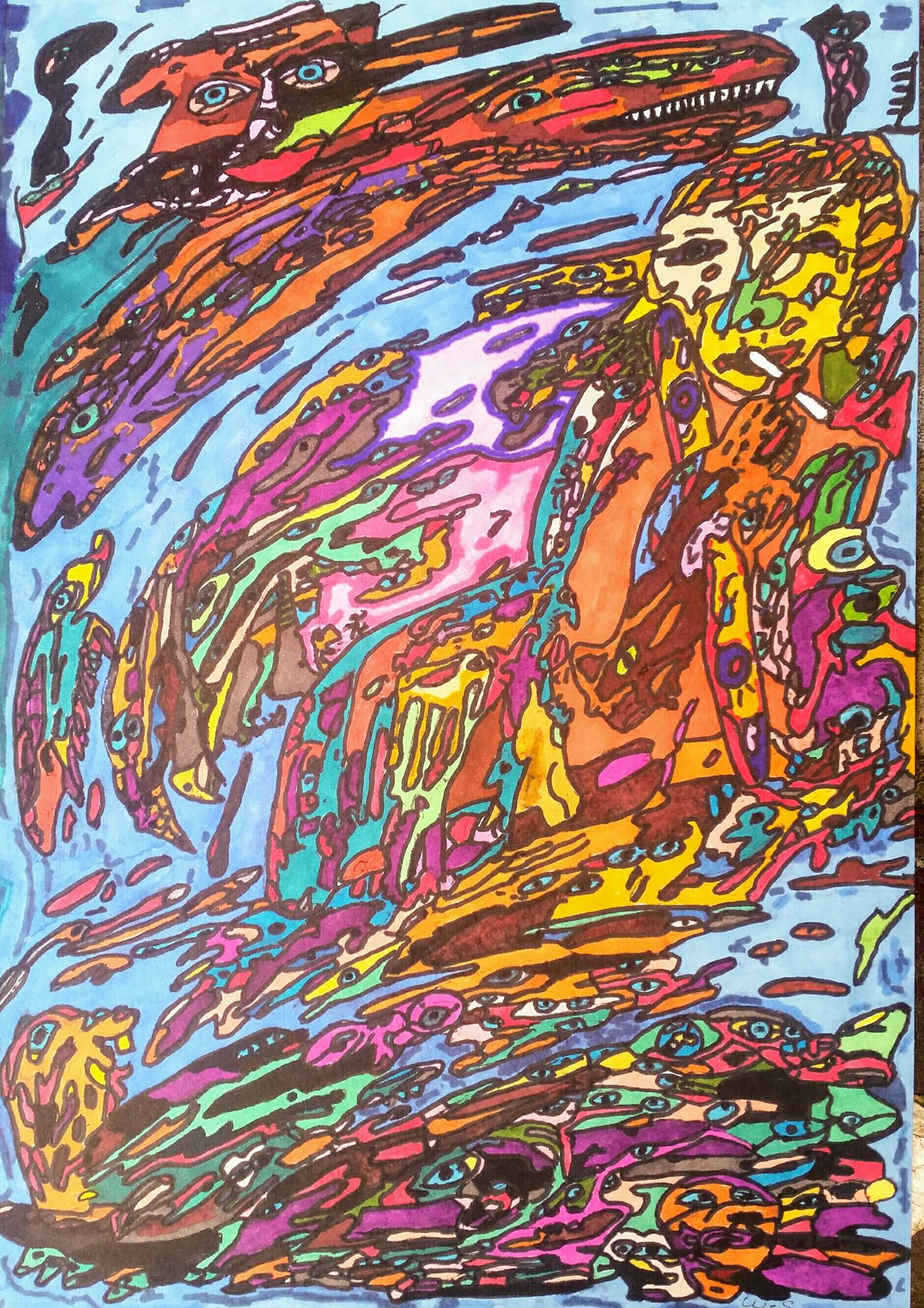 “My favourite is the Mona Lisa painting which so happened to be my most expensive piece. I sold it for £400 at Greenwich Market one weekend.

“People also pick up on the David Bowie one which I drew freehand in just a couple of days.

“I’ve even sold pieces to Australia, Germany and Denmark.

“I even got into the football fever and painted Harry Kane. That one only took me a day.

“My house has just turned into a studio. There’s canvases covering all the walls.”

Wayne said his doctors are more concerned with his cancer treatment and haven’t showed any interest in his artistic talents.

In a further twist, Wayne, who was born in Cape Town, South Africa, woke up to find his accent had changed in early 2017.

“I woke up and started speaking in this weird language, almost like tongue.

“Throughout the day is slowly turned into this weird mix of Northern Irish, Welsh and Scouse mix which I still have now.

“I was then taken back to hospital as I was experiencing terrible fits and shakes.

“It was embarrassing as I was seen to be a drunk slurring his words but it was this weird thing happening to my brain.

“My friends thought I was having a laugh and putting it on but they soon realised this was the new me.

“Doctors were clueless as to what was causing it and they still are.

“But I’m glad I have this talent as I wouldn’t be here otherwise. It’s given me a reason to live.

“I’ve been given this extraordinary talent and it’s something I never thought I would ever be able to do.

“Doctors only gave me a year to live so this really has helped distract me from the negatives.

“I go for chemotherapy every eight weeks which can be exhausting and is a reminder I have this terminal cancer.

“And my girlfriend and I recently broke up so it’s been pretty hard going.

“In the past year I’ve been diagnosed with cancer, gone through a break-up and get my head around my condition.

“But painting has given me a purpose.”

Dr David Alexander Dickie, from the University of Glasgow’s Institute of Cardiovascular and Medical Sciences, said: “There is potentially a biological basis for the these talents forming as a result of their condition.

“As paradoxical as it may seem, damage to certain areas of the brain, for example in the frontal lobe, may limit inhibitory control and allow creative processes to flourish.

“Much like many musical artists claim to do their best work while under the influence of certain substances.

“However, I would NOT recommend any budding artists attempt to damage their frontal lobe, through substance abuse or other means, as these cases are extremely rare.

“Changes in mood are common after stroke and this may also contribute to the artistic process which is inextricably linked to emotion.”

Michelle Dalmacio, Director for Stroke Support for the South of England at the Stroke Association said: “We know that art therapy can help stroke survivors build on their confidence and express themselves in new ways.

“We know that stroke can be a catalyst for creativity, but we’ve not come across many people who have become so accomplished as quickly as Wayne.”