Waldo with a peach from the tree.

A romantic who impressed his future wife by giving her a peach tree has captured the moment their son ate fruit from it – nine years later.

Rhys O’Neill fell for Lindsy Grant in 2009 and gave her a young sapling to take with her to college as a reminder of their love.

They later planted it in Rhys’ back garden – the house where they now live as a married couple with their two children.

The tree has continued to mature and now, nearly a decade after they first met, the tree has borne its first fruit.

Posting the images online, he wrote: “The first time I visited my girlfriend at college I bought a peach tree from a local nursery and I told her someday we will eat peaches from it.

“Well, it worked better than I planned. Here is our son eating a peach from that very tree.”

Rhys and Lindsy, also 30, met a friend’s house just a month before she left to study at Norwich University, New Hampshire.

On a trip to visit her Rhys pulled over at a nursery and picked out a peach tree as a meaningful gift for his sweetheart.

He said: “When I first saw her I was pretty shocked to see someone so pretty here in Vermont.

“We got along right away.

“I was panicking because I was out of her league and I was trying to something to impress her.

“Peach trees take a really long time to grow fruit so I thought it would be kind of clever to get her one.

“When Lindsy would come to visit me she would see the tree, but I don’t think she thought anything would have ever come of it.

“I’m pretty sure I didn’t even plant it the right way. I didn’t know it was ever going to grow peaches.”

Lindsy said: “It was definitely outside of the box as far as gifts go.

“I knew I was going to marry him a few week or two after we started dating.

“He was just different!”

Rhys later took it back with him to their home town of Montpelier, Vermont, and planted it in his garden.

The couple, who now live in that house, went on to marry in March 2016 and had two children together – Waldo and Winnie, three months.

They did nothing to maintain the tree over the years but it somehow survived a series of harsh winters and went on to bear fruit.

They forgot about the tree until this week, it finally bore fruit for the first time.

Rhys, an analyst for a company researching Ebola vaccines, added: “A couple of days ago we were all outside enjoying the weather and I saw that the tree was full of little peaches for the first time ever.

“Our son got to have one.

“He liked the taste of it at first, but then he just threw into his little kiddie pool and walked off. He doesn’t quite understand it yet.

“The tree became a lot more romantic once the peaches were there and my son was eating from it. 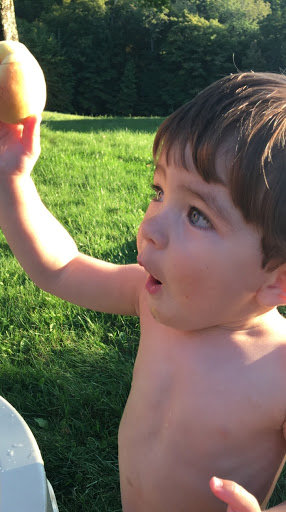 Lindsy, a full-time mother, said: “This is the life with our two little babies. It’s been a journey, but I’m so glad that we have gotten here.”

Rhys added: “We’ve had our struggles, but its super fortunate that we were able to stick together and come out the other side and have a really wonderful family.

“When you’re that young and you really care about someone it’s so easy to mess things up because you just don’t know what the heck you’re doing.”

“We were just lucky enough to figure it out.

“I’m so happy that we get to have this story so that the kids can look it up someday.”

Rhys posted his story on Reddit, where it received more than 100,000 ‘upvotes’.