Tim Pender has been asked to stop taking his ferrets, Jason, Grace and Joy for a pint with him in The Old Coastguard in his home village of Mousehole, Cornwall.

A man has been banned from his favourite pub after complaints about – his three FERRETS.

Former soldier Tim Pender, 57, regularly drinks and dines in the Old Coastguard with his pets Joy, Grace and Jason.

The three ferrets have long dined with him on his lap or on a lead and Tim says he needs them to help him leave the house each day because he’s agoraphobic.

But Tim says he is distraught after being barred from the boozer because of his furry friends.

The manager said they had to take action after getting several complaints over many months from other diners about their”pungent” smell.

Tim, of Mousehole, Cornwall, said he felt ‘physically sick and upset’ by the decision and claimed he is the victim of ‘discrimination.

The ferret owner, who makes stained glass for a living, said the general manager followed him outside and ordered him to stop bringing his beloved pets with him.

The hotel hit back and claimed it dealt with the matter sympathetically and that Tim was himself only then barred for being rude to staff.

But Tim said: “It was a big shock and I felt physically sick when the manager, Louis, followed me outside and told me not to come back with my ferrets anymore.

“They are my companions. I suffer from a form of agoraphobia and having these wonderful little creatures with me gives me the courage to leave the front door every day.

“It feels like I’ve been discriminated against – I felt sick, shocked and upset.”

He added: “People who come into the Old Coastguard have never seen an animal like them.

”Lots of people are delighted by them – they are very intelligent and affectionate creatures very similar to a dog.

“They are as good as gold. They love music. In fact, they were enjoying some bluegrass in a pub last night.”

Mr Pender said when he had previously taken them into the Old Coastguard the ferrets had always either been in a bag, on a lead or sat on his knee.

“They have never caused a problem that I have known of,” he said.

“To be barred is very upsetting, especially as I actually worked at the Old Coastguard for a couple of summers as a young man when I was at university.” 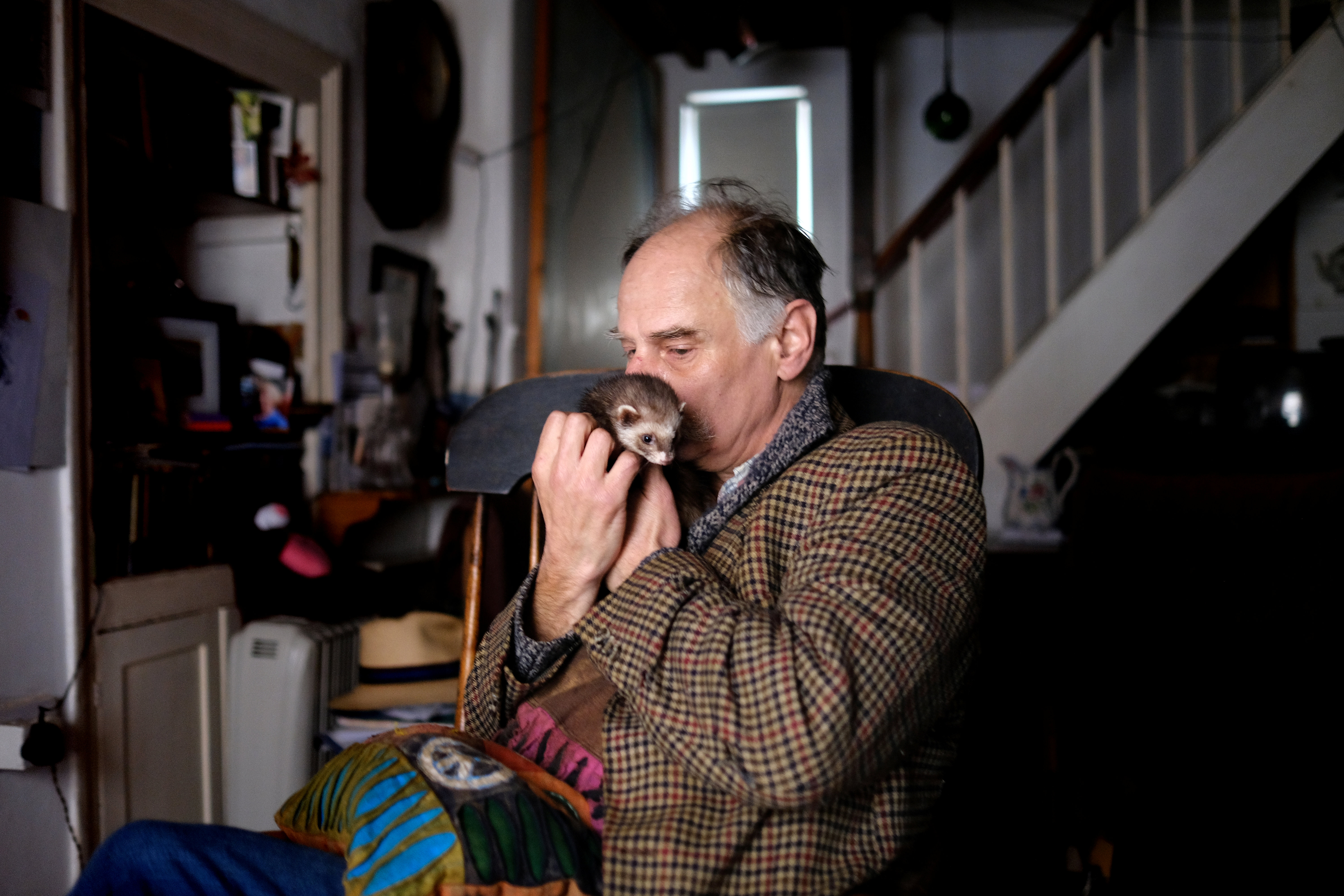 The hotel general manager Louis Vanhinsbergh said he approached Mr Pender in a sympathetic manner to ask him to refrain from bringing in his ferrets as a large number of customers had complained about the smell of the animals.

He said: “We had been receiving complaints for a good few months – people were asking to move tables and some were not willing to even eat here anymore because of the pungent smell of the ferrets.

“They had also escaped off the lead in the garden which is a health and hygiene issue. Plus, we allow dogs, and ferrets and dogs don’t get along that well.

“I have always got along with Mr Pender since I started working at the Old Coastguard in 2011 and had been umming and aahing about how best to approach him about the problem.

“We had a very amicable conversation about it. In fact, I didn’t tell him just how many people had complained and for how long as I knew it would upset him.”

Mr Vanhinsbergh said there then followed a “tirade” against the hotel from Mr Pender on social media as well as personal comments aimed at him.

The manager messaged Mr Pender asking him to stop being rude to his staff.

Mr Vanhinsbergh pointed out that the former customer had not been barred over the ferrets issue but after an outburst in the restaurant last week when he shouted and was “outrageous” to staff in front of other diners.

Edmund Inkin, one of the owners at The Old Coastguard, added: “Being a good community pub matters to us and is something into which we have invested an enormous amount of time and energy.

“So our decision to ask Tim not to bring his ferrets into the building or its garden was only one we’d take after much thought.

“The more recent move to ask Tim himself to stay away is as a direct result of his behaviour on site towards members of our team.” 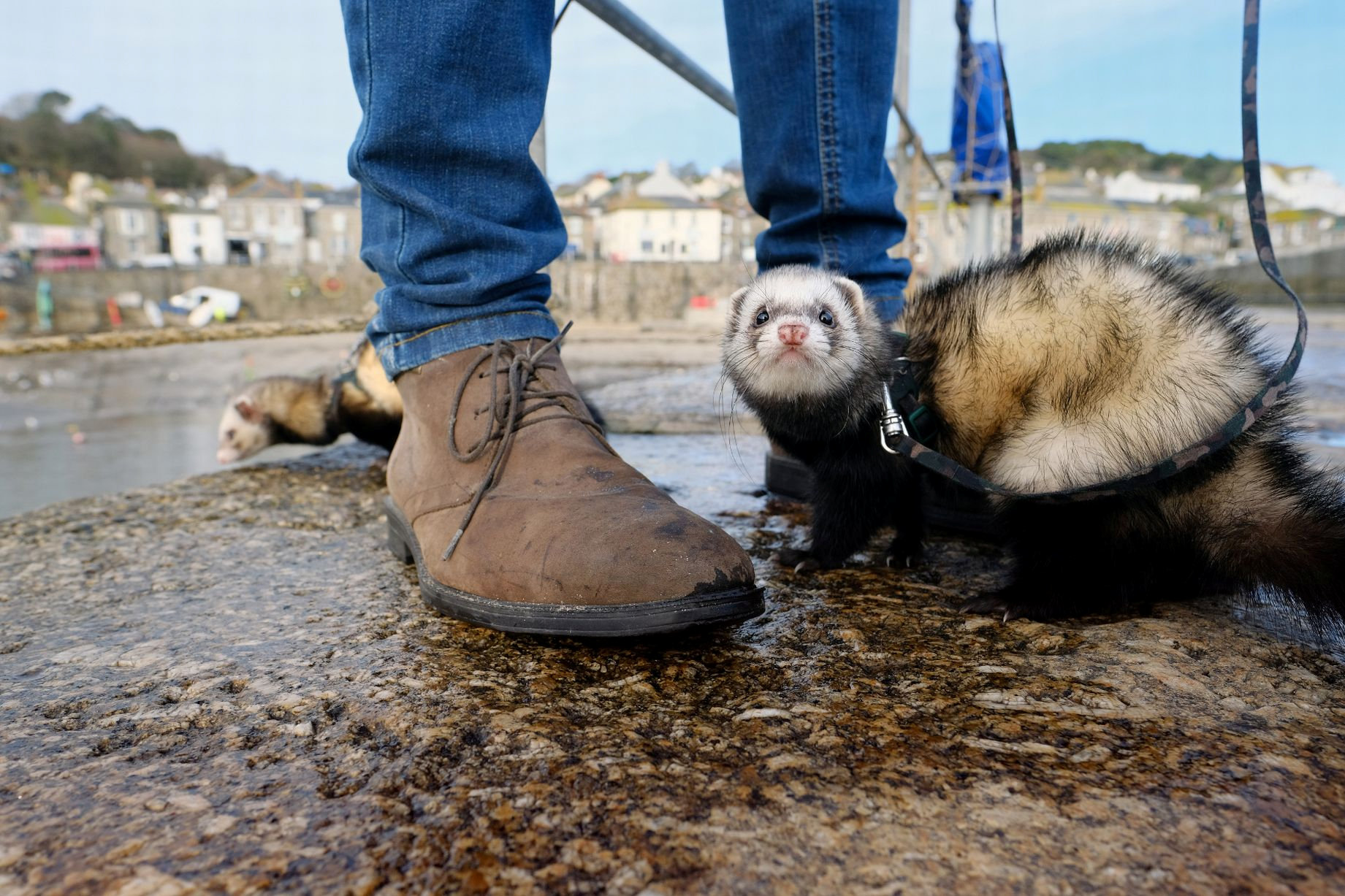 Mr Pender is now regularly drinking with his ferrets in the King’s Arms in the neighbouring village of Paul.

Tim said the ferrets go everywhere with him and were the only therapy he found had worked since he was diagnosed with Combat Stress.

He added: “They give me love and companionship like any other pet. I don’t know what I would do without them.

“When I was in the Army I suffered a rough time and was diagnosed with Combat Stress.

”My ferrets have been the only therapy that has worked for me. They give me the courage to come out and overcome all my problems.”

Tim said he had been going to the Old Coastguard all his life and the ferrets have joined in there for about four years.

He added: “They go everywhere with me and as soon as I got them they never left my side.

“I started with just one that I adopted from my girlfriend when she went back to Spain. The first one was called Fluffy and we sadly lost him under a car.

“I have had the two girls for 18 months and recently added a third male for breeding.

“I thought they were extremely popular at the restaurant and that everyone loved them. I have never had any negative feedback at all so I was very shocked.”