Miranda Meldrum, 14, with her mum Stella.

A music-loving girl ‘locked-in’ her body has ‘woken’ after her mother read and played keyboard by her hospital bed.

Miranda Meldrum was a talented singer and an active 13-year-old when she suffered a rare brain haemorrhage in the night which nearly killed her.

She experienced severe headaches, a sudden loss of hearing and was unable to move her arms before being taken to A&E where surgeons performed life saving surgery.

But the op left Miranda, now 14, with locked-in syndrome – meaning her sharp mind was trapped inside a paralysed body.

She was given a five per cent chance of coming out of her state.

Miranda was unable to move so mum Stella, 52, played piano to stimulate her muscles in the hope she would regain control of her body again.

And to the amazement of top surgeons, who warned Stella to prepare for the worst, Miranda began to move her eyes, arms and speak.

The determined teenager even began to sing along to her mum’s melody – despite the tiny chance of recovery.

She has now started singing lessons again and will go back to school in November.

The family are raising money to aid her recovery – at https://uk.gofundme.com/lis-locked-in-syndrome-aged-13

Miranda, an only child, said: “Music has been as if someone was holding my hand the whole way through this. It’s been my sanity.

“I could see a light at the end, I knew it was temporary. I was channeling positive thoughts, my brain wouldn’t let me think negatively

“The whole time I felt I knew the reason I couldn’t move – it wasn’t like ‘Why is my leg moving?’”

Songs played to locked-in Miranda included Evanescence Wake Me Up Inside and Intertwined by Dodie.

Her father John, 54, also played guitar and sang to Miranda while she recovered.

The strongest emotional response came when Stella read letters from loved-ones to Miranda who was in floods of tears.

Then she noticed an eye flicker and small movements in her hand.

Stella, a doctor of 25 years, said: “Some people can be locked in for years on end, some people are fine with that and some get very upset and wish they hadn’t been saved.

“Miranda had a 95 per cent chance of remaining like that indefinitely.

“The only thing she could do was blink the eyes. We knew she was still in there so I would play songs and Peter Kay dvds.

“For ages she couldn’t move any muscle then after three months she could look slowly to the left.

“Then we started with the classic eye blinks – one blink for yes, two blinks for no.

“Then Miranda moved onto being able to touch fingers on a keyboard and now she’s learned sign language.

“She learned sign language so quickly – I couldn’t keep up.”

Patients diagnosed with locked-in syndrome have an 80% chance of 10-year survival, statistics suggest. 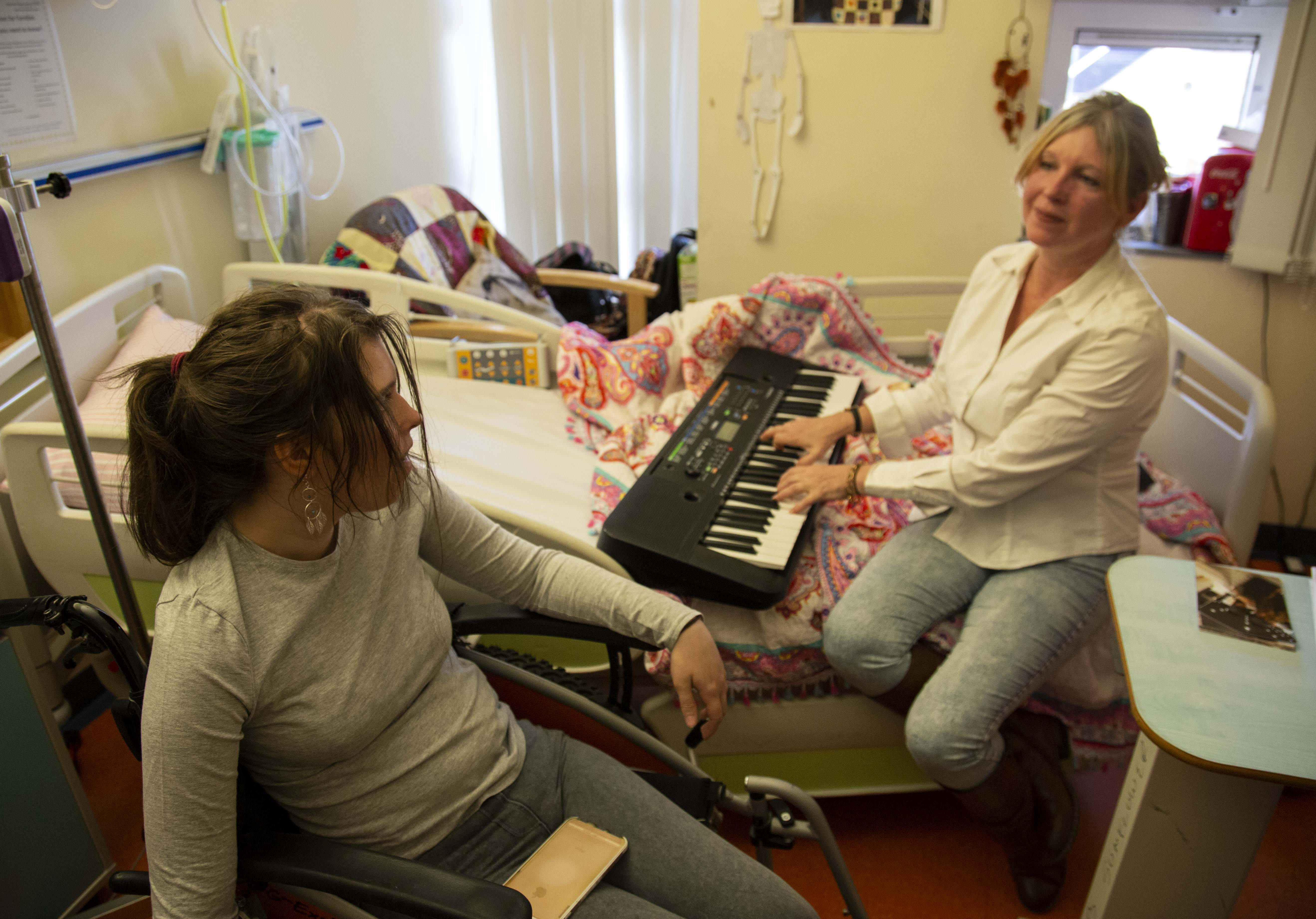 Miranda was a promising pupil before she suffered the catastrophic brain haemorrhage in the early hours of morning on April 25 last year.

Her strongest subjects are art, English, drama, psychology and biology. But Miranda misses her friends more than anything – and says they were vital to her recovery.

The teenager, who loves her three cats and one day hopes to become an animal behaviourist, said: “The three most important things to my recovery are music, my cats and my friends.

“I listened to music throughout and the photos on the hospital wall of my cats helped so much. I message my friends which has helped when I’m bored.

“The thing I miss most about my friends is the fact they get everything, they understand me telepathically and we have our own lingo.

“I’m very excited to be going back to school.”

This and her positive mindset were key elements of her remarkable progress.

John and Stella spent most days by her bedside – and received praise from a neurosurgeon who acknowledged the importance of their care.

Stella said: “The neurosurgeon was kind and said it was an example of good parenting.

“We’ve been there every day – I told the surgeon it’s an example of good brain surgery.”

Describing the night of the brain haemorrhage, Stella said she witnessed around 20 nurses and doctors working on her little girl.

The GP had flashbacks to her stint working in casualty – and couldn’t believe her little girl was now a “touch and go” medical emergency. 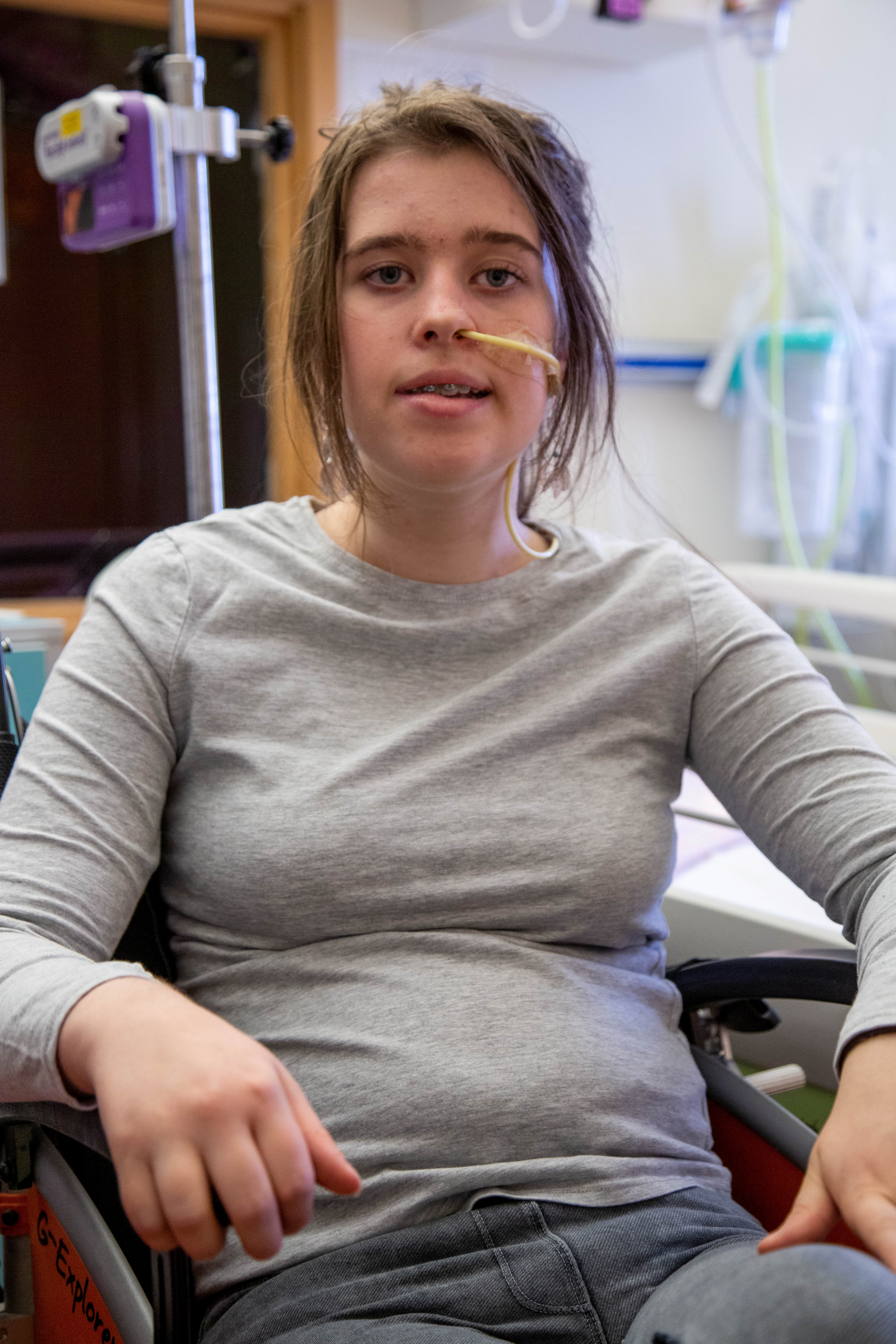 She said: “In my 25 years as a doctor I’ve seen nothing like that. There were 20 members of hospital staff at 4am all gowned and gloved up – the room was full.

“My child coming in unconscious and it was a massive emergency, this teenager has had a brain haemorrhage – she might die.

“A surgeon said we had to take a piece of skull from her head. ‘She might die during the operation but if we don’t do it she will die’, he said.

“They took a piece of bone so they could let the blood out.”

Stella, who has been unable to work for two years while caring for Miranda, launched a fundraising page to pay for specialist equipment for their home.

She hopes to raise £30,000 to purchase a walker for Miranda, pay for private physiotherapy sessions and convert the downstairs of their home ahead of the hospital release next month.

Stella described her condition as the cruellest of ironies because she was “the most active, extrovert girl”.

But she insists Miranda has only made the first steps on a long road to recovery.

Couple had miraculous escape after their plane crashed – while on HONEYMOON